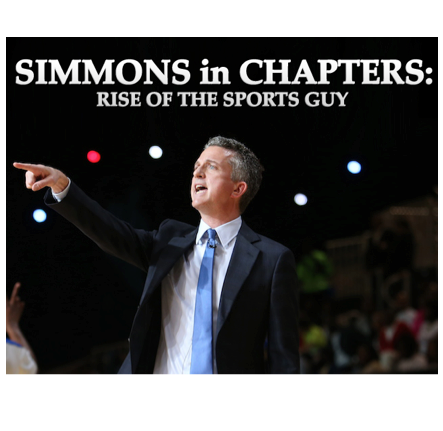 Over the last decade, Bill Simmons has become one of the most important figures in sports. He’s an incredibly popular ESPN columnist and podcaster, the editor-in-chief of his own site at Grantland, a key figure in the 30 for 30 series’ formation, a regular presence on TV and an opinionated personality whose three week suspension for criticizing Roger Goodell has both made him the face of ESPN’s inconsistent discipline policy and perhaps signalled the beginning of the end of his relationship with Bristol. But how did he get here? Over the next two weeks, we’ll examine Simmons’ ESPN tenure in chapters.

First up, Rise Of The Sports Guy, looking at his start at ESPN and his days there through 2007.

Bill Simmons’ rise at ESPN is reminiscent of one of the key ideas discussed in frequent Simmons collaborator and podcast guest Malcolm Gladwell’s Outliers: external circumstances often play massive roles in who finds the highest levels of success. That certainly would appear to be the case with Simmons; his own significant talent and innovations played an important role in his early days at ESPN, but with slightly different timing, it’s quite possible The Sports Guy never would have hit the fame we see today. In fact, with a few different turns, he may never have made it to Bristol at all, much less become a sports media titan.

While Simmons became known for unconventional fan takes laced with cultural references that were starkly different from most mainstream pieces at the time, that wasn’t his initial career path. Under slightly different circumstances, it’s quite possible that Simmons could have become a local print sports reporter or columnist rather than an ESPN figure. His background certainly seemed to set him up for that; he worked as a sports editor at the Holy Cross student newspaper, then earned a master’s degree in print journalism at Boston University in 1994 and then landed a job as a high school sports reporter at The Boston Herald.

For many people in many places, jobs like that have been the starting point for long, conventional media careers, and it could have been here if the Herald had done more to encourage and nurture Simmons as a writer. He’s said that the menial tasks he was given drove him away, though, and freelancing for The Boston Phoenix almost turned him off the media business entirely, causing him to quit and work as a bartender. If this had happened in an earlier decade, that’s probably the end of the story of Simmons as a sports media figure.

This was the start of the internet age, though, and that’s a huge part of what led to Simmons’ rise. He talked AOL’s Boston site into giving him a column in 1997, initially sent it to his friends, built up a mailing list and gained enough prominence to start his own BostonSportsGuy.com site as a side job while still tending bar for a living. Simmons did a terrific job of building enough of an audience there to attract ESPN’s attention in 2001, but again, the era was crucial; Simmons came to Bristol’s attention precisely at the right time, when they were still in the early stages of figuring out what to do with their web presence and when they were looking for something new and different to draw in different groups of fans. Simmons certainly provided that in spades, starting off his ESPN career with a guest column entitled “Is Clemens The Antichrist?” that proved to be one of the most popular pieces on the entire website.

Location and timing deserve another nod there. Simmons started off as the Boston Sports Guy, and that’s an essential factor in his rise. Would ESPN, at that time, have taken a look at a guy writing about Raleigh sports, or Jacksonville sports, or Memphis (the three smallest non-Green Bay, non-Canadian cities to have major pro franchises) sports? That seems unlikely. Boston’s a great place to pick up a local voice who might resound nationally, though, as it’s a sizeable city with prominent and historic teams that had substantial fanbases in baseball, basketball, football and hockey, plus a built-in rivalry with New York. It’s probably much easier to sell management of a national site on long pieces about Roger Clemens or the Patriots than something on the last days of Mark Brunell’s career in Jacksonville. Still, Simmons’ biggest break may have actually come from ESPN criticism, as he recounts in Those Guys Have All The Fun:

“I did this scathing diary of the 2001 ESPYs, I just killed it. I went after everybody. It was a terrible show. They had Joe Theismann doing comedy, and it was like everything people hate about ESPN. It was perfect for me; I made fun of everything. Well, someone at ESPN read it, and it started getting passed around to the higher-ups, and it landed with John Walsh, who started following me. Then he went back and read all my columns.”

It’s interesting to ponder if ESPN would have noticed Simmons without that piece. He was already a talented writer doing a lot of unique things by that point, and one with a decent audience, but the company wasn’t necessarily scouring the web for aspiring writers then. Bristol noticing criticism is a recurring theme in their history, though, and apparently, it can lead to jobs (although Chris Jones might disagree).

Having a key Bristol figure like Walsh in his corner was critical to Simmons’ rise at ESPN, but even with that, it took the threat of a competitor for them to bring him on board permanently. Jay Lovinger, a key ESPN.com editor, says in Those Guys that Simmons was considering returning to the Herald after a year of freelancing for ESPN. Lovinger had quite the job convincing Walsh to make Simmons an offer, but he eventually did, and the rest is history.

Timing again mattered for Simmons, too, as he started writing for ESPN shortly after they launched Page 2 in 2000. Right from the start (see the site’s launch day page here, from Nov. 6, 2000), Page 2 was much different than your conventional sports coverage; it tried new ways of appealing to fans, threw in more pop culture, and even featured Hunter S. Thompson (whose ESPN work in particular carries plenty of ideas similar to Simmons’ columns). It was a natural home for Simmons, one where his pieces fit right in, and one where his work would eventually become the defining trademark of Page 2, encased in its own “Sports Guy’s World” section. If ESPN had decided to only have a newspaper-like presence online, and if they hadn’t already had a quirky section like Page 2, Simmons might not have been such a good fit for them.

The success of the Patriots and the Red Sox also helped here. National outlet ESPN suddenly had a voice who was already prominent locally on those teams, and having the backing of ESPN helped Simmons establish himself even more as an authority on Boston sports. In fact, an anthology of his columns from 1999-2004 was turned into his first book, Now I Can Die In Peace. There were plenty of massive Red Sox fans who would say that World Series victory changed their lives, but Simmons was one of the few to get to write a nationally-published book about it. That’s a nice little perk of being ESPN’s Sports Guy.

One further often-underdiscussed factor in Simmons’ rise and his early days at ESPN is his appeal to bloggers and other influencers who helped grow his audience. Sports blogs were in their infancy when Simmons started, but the content he (and other Page 2 figures) provided was essential to the development of the medium. Simmons certainly wasn’t the first to unashamedly write from a fan’s perspective, or the first to make pop-culture references, or the first to analyze games well beyond traditional recaps and box scores, but he was an important figure in popularizing those concepts. Moreover, his writing at first was so different from a lot of what was seen in local newspapers that it became a frequent conversation topic amongst early bloggers, and amongst those who would later become bloggers. As discussed by Gladwell, Simmons has a huge and highly-engaged fanbase, and particularly early on, one that was eager to spread his work around and discuss it. That helped make him a valuable presence at ESPN, even when he was still just a regular columnist.

Simmons and Page 2 proved a perfect match, and one that benefited both sides. The relationship wasn’t without bumps (Lovinger says Simmons was “an incredibly pain-in-the-ass guy to work with,” particularly when he’d disagree with edits and complain to Walsh or John Skipper, who was running ESPN.com at the time), but Simmons provided a lot of great content and helped make Page 2 a destination for many digitally-savvy sports fans, while ESPN gave him a national platform and one that would continue to grow. Simmons wanted to do more than just write columns, though, and he did. We’ll get to that in our next installment.