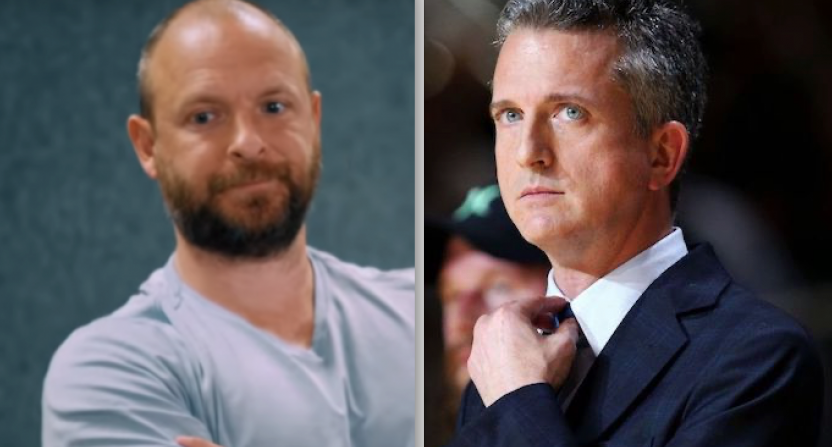 On Wednesday’s edition of his podcast, Bill Simmons apologized for aspects of a conversation with Ryen Russillo about the George Floyd protests that have been criticized for tone-deafness.

“I’ve been thinking long and hard about my podcast in general and this platform, and what I want to do with it over the next few weeks and months,” said Simmons in an introduction. “I think I just misread the moment on Sunday night, you know, was trying to do a ‘shoot the shit,’ take your mind off things kind of podcast like we would always do on Sunday and the moment was bigger than that.

“I wish I’d have had an expert with us that we could’ve bounced some questions off of and tried to learn from, instead of treating the moment like we did. I apologize for that. Look, I’m 50 years old. I still barely know what I’m doing and I’m still gonna make mistakes. I’m still not gonna throw a no-hitter every step of the way. The only thing I can do is learn from a mistake and try to get better at it.”

Bill Simmons apologizes for “misreading the moment” during a discussion in the George Floyd protests with Ryen Russillo: pic.twitter.com/J0U5QnTR6g

Simmons invited civil rights activist, author, and podcaster DeRay Mckesson on the show to lend his perspective on current events, one that was admittedly lacking in the previous conversation between him and Russillo.

We are seeing a monumental failure of local leadership in real time. The reality is that they could’ve reigned in the police a long time ago and lacked the courage. These mayors let this happen.

Russillo drew intense criticism for remarks he made on Monday’s Bill Simmons Podcast about the Floyd protests and ensuing riots, Donald Trump, and the company’s hiring practices.

In particular, Russillo’s comments praising Simmons for trying to create a diverse company and staff was disputed by the Ringer’s union.

“Look at you, Bill, look at the people you’ve hired, look at the company that you’ve started,” Russillo said to Simmons. “Look at the jobs and opportunities that you’ve given a diverse group, which I know you’re always looking to do.

“I’m not bullshitting, I’m not kissing up to you here. These are facts. You have tried for a very long time to make sure your hiring is as diverse as possible. And you’ve done these things.”

The Ringer Union took issue with what Ryen Russillo said about the company’s diversity: https://t.co/xulmhlH0VN pic.twitter.com/REM4odJhll

Simmons didn’t respond to what Russillo said on that subject. But those remarks prompted a rebuttal (and thread) from the Ringer Union on Twitter, highlighting the lack of black editors and full-time writers, in addition to the difficulty in committing to diversity hiring practices in collective bargaining:

In 2019, 86% of speakers on The Ringer Podcast Network were white. We have zero black editors. We have zero black writers assigned full time to the NBA or NFL beats. Our union is currently bargaining for practices to improve our diversity and inclusion.

Ringer writer John Gonzalez spoke out individually following the union’s statement, not naming Russillo by name but clearly disagreeing with what was said on the Simmons podcast.

If you’ve heard someone say The Ringer is a super diverse place, sadly that person does not know what he’s talking about. We have a long way to go, and I hope we get there https://t.co/uw8HfIaksm

Many (including the New York Daily News‘ Dennis Young) also took issue with Russillo’s framing of the protests, particularly the rioters causing property damage who he viewed as having more selfish motives in mind.

“Some of the people who may have had an open mind about this are looking not at the protestors but the looters […] https://t.co/sYA8ps1vKs pic.twitter.com/pCXy3JTZ1B

Russillo also called himself selfish, indicating how he voted in 2016 after Simmons criticized Donald Trump for his divisive rhetoric and actions during these protests:

“I think most of us vote selfishly. I voted for tax purposes.” https://t.co/z6tqwtmMZA pic.twitter.com/lqVRQSpi22

The Ringer also posted this official statement on Twitter:

Someone with an outlet as popular as Simmons can sometimes lose sight of the bigger picture. You get too comfortable in front of a microphone, your audience loves most of what you have to say, and those in the media — especially in audio more than print — forget that they don’t know everything and lack a meaningful perspective.

Simmons didn’t go forward with Monday’s podcast without addressing the George Floyd protests. To not address what’s going on in the world would’ve seemed particularly irresponsible, tone-deaf, and ignorant when the podcast has often commented on what’s happening in culture, even if it’s through a sports perspective. But maybe not enough thought was put into preparing for such a discussion, which Simmons now acknowledges.

The apology doesn’t address Russillo’s remarks about diversity among The Ringer staff, but Simmons let that go by during the conversation anyway. Russillo is the one who has to wear those comments and as of yet, he hasn’t addressed them. Whether he will or not, on Twitter or his podcast, remains to be seen.

UPDATE: Russillo apologized for his remarks at the beginning of his podcast Wednesday.