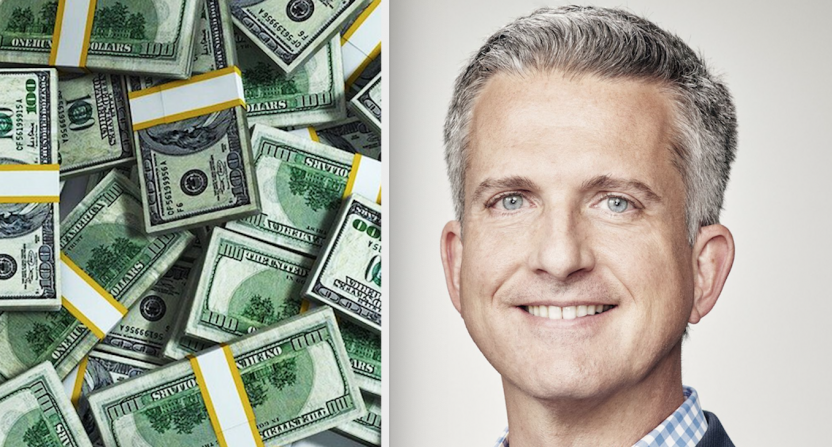 Those who scoffed at the reported $200 million price tag Bill Simmons put on The Ringer may be looking on with admiration now. As it turns out, Simmons may have gotten even more in selling his podcast network and website to Spotify.

According to Bloomberg’s Lucas Shaw, Spotify is paying nearly $200 million (or 180 million euros) upfront to acquire The Ringer. That will be followed by another $50 million to come.

The financial terms of the deal are not yet official because the acquisition hasn’t been announced. Spotify is expected to confirm what it paid for The Ringer in an upcoming regulatory filing.

News of the $200 million asking price (reported by Front Office Sports’ Michael McCarthy) may have been viewed with skepticism, but it indicated that Simmons was fully aware of what Spotify had paid for other podcast networks. The streaming music company purchased Gimlet Media for a reported $230 million one year ago, followed shortly thereafter by acquiring Anchor for $140 million.

Yet industry observers estimated The Ringer’s value around $100 million, which is reportedly what Simmons sought from WarnerMedia when discussing a sale last year, according to Recode’s Peter Kafka.

Gimlet arguably has a more diverse podcast catalog that could reach a wider audience. Yet Spotify wants to boost its news and sports podcast content, and The Ringer has established programs covering the NFL, NBA, Major League Baseball, golf, fantasy football, and sports betting, along with many shows discussing pop culture, including Simmons’ own podcast. Whatever daily sports content Spotify aims to produce, such as recaps and team-specific shows, can be built on that foundation.

Did The Ringer capitalize on Spotify’s ambition to make a big push into sports podcasts? Was this an instance of Spotify making Simmons an offer that was too impressive to refuse? By setting the bar so high, maybe Simmons was saying that he didn’t really want to sell his company. Spotify then called his bluff, paying up for the network that fills many of its podcasting blanks.

Selling The Ringer raised questions of how long Simmons would stay with the company and how its (recently unionized) employees could be affected. According to Bloomberg’s source on the sale, Spotify’s deal requires Simmons to stay with The Ringer, though an exact time span wasn’t specified. Additionally, terms also ensure that most of the podcast and website staff stays on once the deal has been completed.