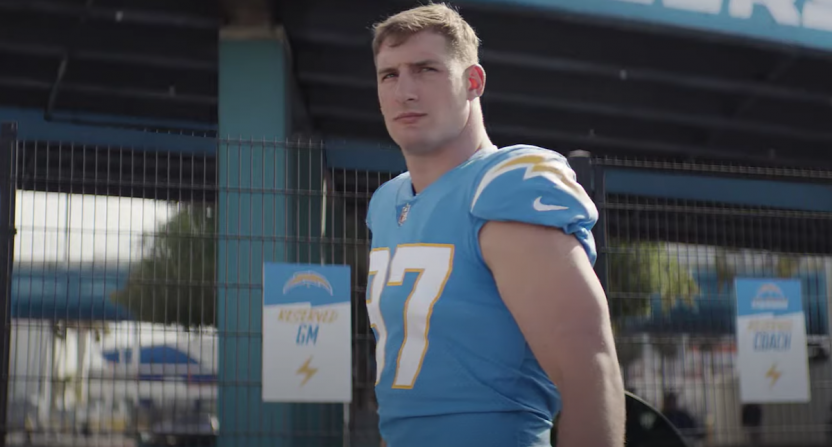 With big sponsors like Budweiser, Coca-Cola, Pepsi, and Hyundai opting not to buy commercials for Super Bowl LV, it was natural to ask if this year’s crop of ads would be as fun or memorable.

A Super Bowl without a Budweiser ad? Wow, the world really is different right now.

But advertisers still provided plenty of entertaining content when football took a break during Super Bowl LV. Whether or not we’ll be talking about some of these commercials in the days, months, and years to come has yet to be determined. But there were laughs and not too many attempts at seriousness or morality amid the COVID-19 pandemic. The commercials were a distraction, which is why we were all tuned in.

Here are our choices for the 10 commercials from the Super Bowl LV broadcast.

With not just one but two entertaining ads, Rocket Mortgage and Tracy Morgan won the night. The difference between “pretty sure” and “certain” when trying to buy a house is one thing. But what about taking on Dave Bautista in a street fight?

The home lender’s second ad might have been even better, featuring Los Angeles Chargers defensive end Joey Bosa turning over cars that dared park in his reserved spot. No CGI or wires used here, right? Bosa can totally overturn a car by himself.

M&M’s set the bar high early on by highlighting so many things in our current culture that can annoy us like gender reveal parties, mansplaining, and reclining seats on airplanes.

As a bonus, pop culture Dan Levy from Schitt’s Creek appears at the end. (Quite a weekend for Levy, also hosting Saturday Night Live this weekend.) That might date this ad a little bit in future years, but better to be trendy and give casual (or non-) fans someone they’ll recognize while watching the Big Game’s commercials.

But this ad might have been the most technologically impressive of the night, showing a paper-flat McConaughey trying to live his regular life. This raises the question of how #FlatMatthew got that way in the first place. Is that some kind of commentary on pandemic life? OK, let’s not overthink it.

Will Ferrell in any Super Bowl ad is probably going to be a winner. Punching through a globe is even better. Hey, if it helps make GM striving to beat Norway in selling electric vehicles a compelling subject, let Will do his thing.

Maybe some more Kenan Thompson and Awkwafina would’ve been better. (There’s an extended cut of the ad with a bit more of those two, but it mostly explains how Ferrell got to Sweden.)

While Budweiser didn’t have a Super Bowl commercial, plenty of other Anheuser-Busch products did. Bud Light has been running “classic” ads throughout the NFL playoffs, which provided a fun bit of nostalgia.

As it turns out, however, using those old ads was building toward something: An Avengers: Endgame-type of climax that brought the Bud Light Legends back through portals to help an overturned Bud Light delivery truck. (Did Joey Bosa push it over?)

Oh, this commercial was so close to featuring both Super Bowl LV quarterbacks. (Sorry, Aaron Rodgers. Blame Tom Brady.) But it brought back the “Discount Double Check” cheesehead. (Rodgers!) And Paul Rudd got to be a stand-in for Patrick Mahomes from his beloved Kansas City Chiefs.

What was the better throwback in this ad: “You’re the Best” from The Karate Kid providing the soundtrack or the kid drinking a glass full of raw eggs (the original protein shake)? Does this kid grow into a bulked-up musclehead who perhaps becomes a pro wrestling champion? Or a hotshot day trader? If any of the Super Bowl LV ads warrants a sequel, this might be the one.

(By the way, “You’re the Best” was performed by Joe Esposito if you’re working in an office these days and need some trivia to impress your co-workers.)

Judging from Twitter, this was a popular choice for the best Super Bowl LV ad. Why was Jason Alexander the face of this commercial? Why not? (According to Variety‘s Brian Steinberg, Alexander shot a whole lot of photos to use here.)

Using “Believe It or Not,” the theme from The Greatest American Hero, tied the ad together by referencing a classic Seinfeld episode, “The Susie,” in which George Costanza adapted the song into the outgoing message for his answering machine. (That reference was apparently missed by TV writer Mike Schur during the game.)

Wigs, make-up, and even digital effects can do a lot these days to make actors look younger. But have Mike Myers and Dana Carvey aged since “Wayne’s World” was at the height of its popularity on SNL and in movies during the 1990s? The two look like they could go right back to Studio 8H to film a sketch or do another movie (which would probably have to show on Peacock).

Cardi B fit right in too. Maybe she can take on Mark Hamill and Patrick Stewart in their Uber Eats ads.

Though there were some subpar Super Bowl LV commercials (TurboTax never gets this right, year after year), there is only one clear choice for this year’s worst ad.

What? Was? This? If the objective of a Super Bowl ad is to get people talking about your commercial and product, then OK, Oatly, CEO Toni Petersson, and his digital piano accomplished their objective.

Maybe this ad feels more baffling because Oatly (which is an oat milk, if the commercial left you wondering) is a good product, possibly made even more popular due to its low supply three years ago. Just as people discovered how good oat milk tastes on cereal and in coffee — much better than almond milk — it suddenly wasn’t available.

That’s no longer a problem. Oatly is available all over the place. But will this ad make anyone want to buy it? When has that ever mattered for a Super Bowl commercial?