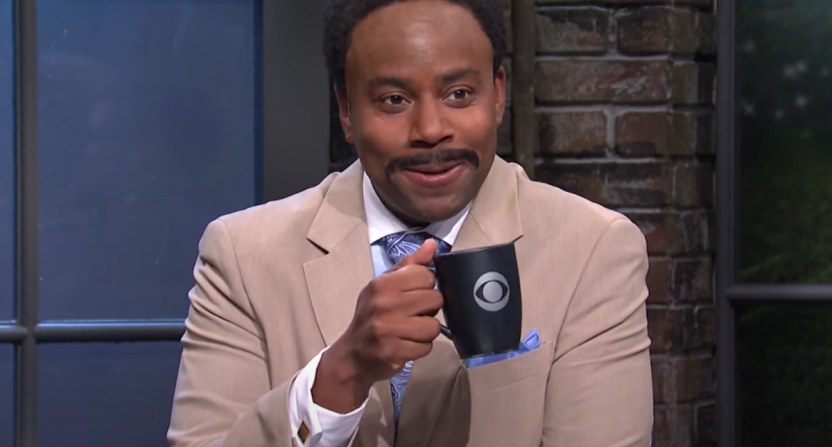 With Super Bowl LV this weekend, Saturday Night Live chose to spoof The Big Game rather than engage in political satire and commentary for the show’s cold open. (Well, OK, there was still some political stuff in there…)

SNL took the opportunity to poke fun at the Super Bowl viewing phenomenon as a whole, particularly how networks and the NFL try to portray the football game everyone’s watching as a time when people can come together, regardless of their differences.

Who did the best job imitating a CBS personality? Moffat put some thought into his Cowher portrayal with his pauses and grunts, but maybe Bennett’s meathead take on Esiason was the funniest.

Perhaps the best part of the skit was making fun of the popular Nickelodeon broadcast and its signature use of slime.

We just needed Burleson explaining that one to Gabrielle Nevaeh Green with an analogy. “You know when you rush to beat the bell and accidentally slam your knee into the leg of your desk? It kinda feels like that.”

The only slip-up? Saying Bravo and Andy Cohen was simulcasting the Super Bowl broadcast. Bravo’s an NBCUniversal network, people! (Getting in a company plug there, apparently.) Viacom CBS probably doesn’t have an equivalent, though. Maybe something with Jersey Shore: Family Vacation? Too much of a stretch?

And a round of applause to Aidy Bryant for playing both Kansas City Chiefs coach Andy Reid and Bruce Arians of the Tampa Bay Buccaneers. Just give her a little bit of time for that quick costume change. Well done.

Not a vintage SNL skit, but at least it was timely. And making fun of the Super Bowl and its TV coverage is another sign that the show might not lean so heavily on political humor under a new administration. For some viewers, that’ll be a welcome change.