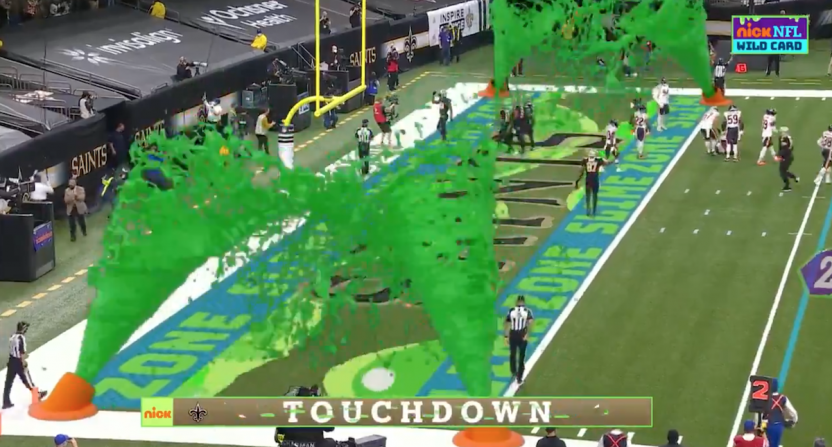 Nickelodeon’s broadcast of Sunday’s NFL Wild Card Playoff game between the Chicago Bears and New Orleans Saints was fun. (Well, maybe not for Bears fans disappointed over their team’s 28-9 loss.) Fans, along with NFL, CBS, and Nickelodeon executives couldn’t have hoped for more from the kid-friendly telecast.

Best of all, viewers responding to the broadcast on social media largely seemed to accept the entire effort in the spirit of which it was intended. Those who wanted a regular NFL broadcast could watch Jim Nantz and Tony Romo on CBS. But anybody who wanted something a bit different, albeit without much serious football talk, had a memorable alternative on Nickelodeon.

And for regular Nickelodeon viewers wondering why football was on their channel, rather than cartoons or sitcoms, SpongeBob Squarepants and Patrick Star appeared to fill viewers in. Oh, and learn about football.

[Editor’s note: Please forgive the video taken from TV with an iPhone. We couldn’t pull video of Nickelodeon from our normal sources, so had to go without a streaming-type option. Did it bring back memories of Vine for you?]

Prior to kickoff, Nickelodeon and the broadcast team of play-by-play announcer Noah Eagle with analysts Nate Burleson and Nickelodeon star Gabrielle Nevaeh Green explained NFL scoring rules to the audience.

Presuming that the viewership may have been watching an NFL football game for the first time was a frequent theme throughout the telecast. Eagle would explain why there was a bright line on the field — in this case, an orange line pulsing with green slime rather than the standard yellow marker.

The lines are actually moving during play pic.twitter.com/7O1dnK6OOT

Burleson might compare star players to a Nickelodeon show. (For instance, the Saints’ Drew Brees and Alvin Kamara were like Kel and Kenan from All That.) Green served as the entry for the new audience, asking questions about what was happening and maybe why.

Nickelodeon stars were also helpful in that regard. What’s a turnover, Patrick?

Another particularly fun feature was Young Sheldon from the CBS sitcom (with frequent reruns on Nickelodeon) popping up on the screen to explain penalties, such as a false start.

That kid needs to return for regular NFL broadcasts to explain why catches were ruled incomplete or pass interference wasn’t called. As a rules analyst, young Sheldon Cooper almost as well-dressed as Mike Pereira.

After the novelty of googly eye, exploding clouds, and slime cannons wore off early on, regular football fans tuning in may have noticed that there wasn’t very much in-depth football analysis. Eagle and Burleson weren’t explaining what Chicago quarterback Mitchell Trubisky may have been seeing in the Saints’ defense. There was no insight into the play-calling or game-planning of New Orleans coach Sean Payton.

Only the most hard-hitting analysis from the Nickelodeon broadcast pic.twitter.com/7IDzpWduj4

No, that sort of commentary shouldn’t have been expected on this telecast. But fans accustomed to a certain type of analysis and insight from a broadcast might have eventually felt that was lacking and perhaps switched over to the conventional CBS broadcast. (When the Bears called three straight running plays at the end of the first half, however, Burleson pointed out that it indicated head coach Matt Nagy didn’t trust Trubisky.)

Nickelodeon’s coverage definitely paid off in the way viewers expected. Those who wanted slime cannons superimposed on the end zone when a touchdown was scored were not disappointed. Brees to Michael Thomas for a score and slime!

And SpongeBob appeared between the uprights on field-goal attempts!

Though the broadcast was intended to be fun, there was no intention to make fun of any players for mistakes or mishaps on the field. That may have been best demonstrated by a terrible drop by Bears receiver Javon Wims, letting a sure touchdown catch slip through his hands.

Googly eyes, slime, or a head surrounded by question marks would’ve been an excellent accompaniment for such a gaffe, but Wims suffered no such ridicule.

If anyone ever deserved to be slimed, it's Wims here: pic.twitter.com/Vxzf9Oexph

Maybe a Band-Aid over Cordarrelle Patterson’s mouth or soap could have been used when he was caught yelling the f-word at a referee just before halftime. The adult content couldn’t be entirely kept out of a kids-themed telecast, unfortunately.

Speaking of halftime, shouldn’t all first-half highlights be shown with Minecraft-type graphics?

First half of Saints vs. Bears is in the books.

Get your first half highlights… @Nickelodeon STYLE. pic.twitter.com/eJ2CdYke4G

One aspect of the broadcast that stood out as weak — or at least strained — was Burleson frequently relying on analogies that kids could presumably relate to when explaining football situations. Mitchell Trubisky being benched earlier in the season for Nick Foles, for example, was like getting grounded by your parents. On offense, getting first downs was like having homework and advancing to the red zone was taking the test. Etc.

Burleson probably went to the analogies too often, and some of them were definitely stretches. But the intent to reach out to the young audience and make football more relatable was a worthy effort. (Getting tackled was like falling down wooden stairs? That was a good one!)

His willingness to be playful and clever — goofing around with Green and joking he would slime Eagle later on — showed he was the right choice for this role. He had fun with it, maintaining the lighter tone for the broadcast.

Perhaps the best thing to say about Nickelodeon’s NFL playoff broadcast is that it would be enjoyable to see such a production again. The kids network and CBS put some impressive production work into the telecast, and the effort showed. The team was ready with goofy, entertaining graphics going to commercial breaks. Player bios included information like their favorite ice cream flavor.

Ultimately, this was a fun way to watch a football game, especially one that wasn’t very competitive. And it was a clever effort by CBS and the NFL to reach a young, impressionable audience and ideally create new fans. Maybe parents and their kids watched an NFL game together for the first time because of this. Other sports and networks should make the same effort.

All jokes aside, the #NBA and @MLB need to do one of these on @Nickelodeon as well

When Sean Payton gets into the spirit and keeps his promise to get slimed if the Saints won the game, you know this was fun.