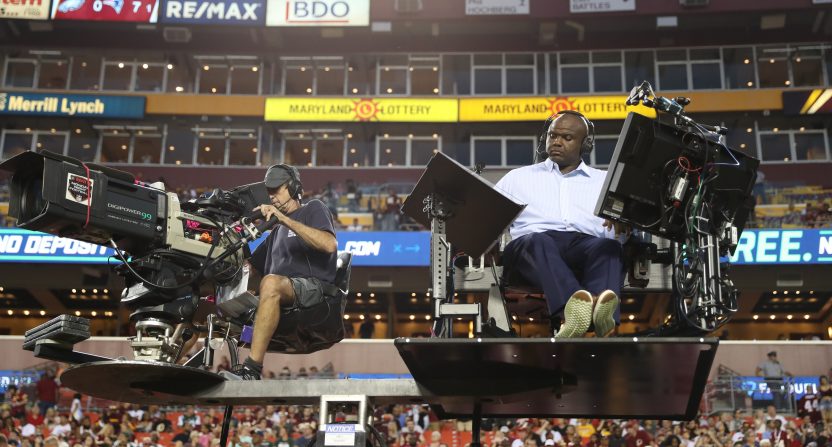 RIP, BoogerMobile. ESPN’s much-criticized “innovation” of an elevated sideline cart that had Booger McFarland roam around as a “field analyst” on Monday Night Football broadcasts, blocking views along the way, appears to be dead after just one season. That was somewhat expected, of course, as ESPN put McFarland in the booth for their final three regular-season games (often citing weather) and for their wild-card playoff game. But with all the uncertainty around what MNF will look like next year following Jason Witten’s exit, it’s good to have some confirmation that at least it won’t involve a BoogerMobile. (It may still involve McFarland, but he won’t be on the cart.) That comes from a report from Michael McCarthy of The Sporting News:

McFarland himself could still be part of the “Monday Night” announce crew with play-by-play announcer Joe Tessitore and sideline reporter Lisa Salters, sources said. But his on-field crane will join the late, unlamented Mobile ESPN phone on the network’s list of technology flops.

That list also includes a few other broadcasting “innovations” ESPN has tried unsuccessfully since that phone, such as the “floor seat” camera angle and the illuminated 3-point line (both tried on basketball broadcasts in 2016). We can now throw the BoogerMobile on that pile.

And there’s merit to this move beyond just getting rid of the sightlines-blocking crane; it means that if they do keep McFarland, he’ll likely be moved to the booth. That might help provide a “seamless” experience like the one ESPN was initially targeting, with McFarland and another analyst (if they do add one to replace Witten instead of just sticking with McFarland and Tessitore) able to see each other and pick up on how not to talk over each other. We’ll see what the future is for McFarland and for MNF, but the news of the BoogerMobile being dead sure seems like a positive start to this offseason’s changes to that broadcast.

Let's pour one out as we remember the Booger mobile pic.twitter.com/PsirDkl0dX