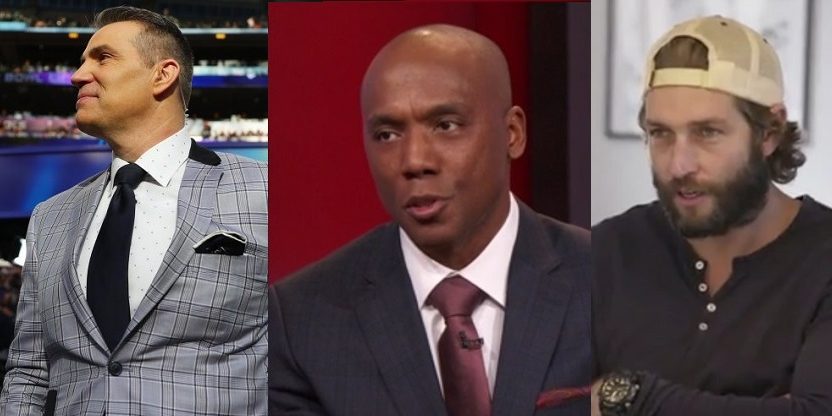 Jason Witten went back to the Dallas Cowboys last week, leaving his broadcasting career in the dust, and one part of the world seemed a bit brighter.

Who do you should should replace Witten on Monday Night Football, if anyone? There are a whole lot of options here, and plenty of different directions ESPN can go in creating a new MNF booth.

Andrew Bucholtz: I’d like to see Booger McFarland kept around, but brought into the booth, and I’d like to see Louis Riddick join McFarland and Joe Tessitore. Riddick would add an interesting perspective from his time as a NFL safety and especially his time as a scout and director of pro personnel, and combining him with former defensive lineman McFarland would make ESPN’s broadcast stand out from all the other ones using former quarterbacks. There’s a risk in bringing in someone like Riddick without much game broadcasting experience, but he’s been an ESPN analyst since 2013, so he has significantly more on-camera experience than Witten did, and it should be a much easier transition for him. And I like the idea of putting him in a three-man booth so he doesn’t have to talk after every play.

But regardless of whether they add Riddick or even if they keep McFarland or not, I think the biggest thing that needs to happen post-Witten is for ESPN to permanently kill the sideline Boogermobile. It seemed that idea was on its way out anyway even before Witten left, with ESPN not using it for their playoff game, and it’s about time. Putting McFarland down there was a big part of the problem with last year’s MNF booth, as he couldn’t see Tessitore and Witten and pick up visual cues on when to jump in or not, leading to him and Witten often talking over each other or staying too silent, thinking that the other would jump in. And that’s before you get to all the issues with the Boogermobile blocking fans’ views. So it needs to go. A three-man booth can be perfectly fine, but it tends to work much better if they’re all actually in the booth.

Phillip Bupp: In most situations, I have preferred a two person booth. In some instances, three people can work, but there seems to be too many cooks in the kitchen and analysis gets diluted when it’s three people, especially when two of them have very similar analyst styles and backgrounds. ESPN will choose a three person booth because they consider Monday Night Football more than a football game, and they’ll want to ramp up the entertainment value. But in my dream scenario, I just have Joe Tessitore and Booger McFarland in a two person booth. Well, maybe it’s not my dream scenario to have those two people call a game, but let’s deal with one thing at a time.

Matt Clapp: I’m guessing ESPN wants a bigger name to the casual football fan, but I think they should just go with someone who’s already serving as an outstanding analyst for the network- Louis Riddick.

Now, Riddick — a former NFL scout and director of pro personnel — belongs in an NFL front office, and has interviewed for general manager positions. But he even admitted in 2018 that he’d like to call Monday Night Football, and there isn’t a better person for the job. He’s very well-spoken when it comes to the X’s and O’s of football, but also when it comes to more serious topics in the football world. He really, really knows the game and will educate the audience, while complementing that with a good voice and personality.

Its only model of consistency was when Mike Tirico and Jon Gruden were the team from 2012 through 2015. Now after a season with Joe Tessitore, Jason Witten, and Booger McFarland, it has to either look for another replacement or stand pat with JoeTess and Booger.

Yes, it appears ESPN is going after a big name in Peyton Manning, but what if Peyton rejects the Worldwide Leader as he has in the past? Where will this leave ESPN? And while I agree with Matt Clapp that Louis Riddick would be a good choice, I wouldn’t mind if the network decided to just keep Riddick in the studio with JoeTess and Booger calling the games.

Ever since ESPN has gotten its hands on MNF back when ABC aired the games, it has tried to regain the formula that worked in the 1970’s with Frank Gifford, Howard Cosell and Don Meredith, but the problem is that Giff, Howard and Dandy Don were that once in a lifetime combination. ABC hit the lottery in bringing them together and ESPN has been trying ever since to capture that magic with no luck.

Just stand pat with JoeTess and Booger and stop trying to tinker with the booth.

Ben Koo: After a year of ESPN being constantly roasted for Monday Night Football, the pressure is really on to avoid a second year of backlash.

My immediate thought is Kurt Warner is the low hanging fruit to bring in, given he’s already doing MNF radio and has generally been well received calling games on NFL Network. Keep Tessitore, bring Booger into the booth, add Warner, and just hope the early reviews are good. I am not of the thought that a two man booth is viable with Tessitore and Booger. That’s asking an awful lot of Booger, given he wasn’t even in the booth most of the year. Additionally, he was mostly focused on being a college football studio presence up until last year and, generally speaking, the announcing booth has been more kind to players with offensive backgrounds.

However, if ESPN wants to roll the dice, I can foresee a scenario where they just wing it and let Tessitore and Booger go a year hoping it just figures itself out. If so, great! If not, perhaps the additional year opens up the door for Peyton Manning, Drew Brees, or even a return of Jon Gruden. I’m am very bullish on Brees as a television personality and he has no contract beyond next season, when he’ll turn 41. My other thought here is that I have a suspicion Booger might be better suited for college football and a studio role. Perhaps in another year, the timing would be right for Lee Corso to step away and Booger has a nice soft landing available should the two man booth experiment fail.

If I’m ESPN, I go Warner and play it safe given how rough the last year was for them. If ESPN is feeling saucy, Warner doesn’t impress, and Manning only wants to focus on Nationwide jingles, maybe a better solution presents itself down the road, but I’m not sure that is a risk they can take at this point.

Joe Lucia: More often than not, ESPN doesn’t follow the good ol’ KISS rule (keep it simple, stupid). Instead of promoting the best person from within (Jon Sciambi…hello), they go with some absurd, out of the box choice (Alex Rodriguez, Matt Vasgersian…welcome) and it blows up in their faces. That’s what they did a year ago with Monday Night Football, hiring a reluctantly retired NFL tight end and a college analyst (who they proceeded to throw on a fucking sideline cart for no good reason) to pair with Joe Tessitore, a reasonable choice.

This spring, they desperately need to follow the KISS rule. To hell with hiring another reluctantly retired tight end (Greg Olsen), trying to pry an analyst away from another network (Kurt Warner, among others), or promoting yet another college analyst (Kirk Herbstreit has been the most frequently mentioned). Promote Louis Riddick to the MNF broadcast crew, “demote” (ESPN would naturally spin it as a New and Exciting Role!) Booger McFarland to either MNF Countdown or Sunday Countdown (replacing the departed Charles Woodson), and you’ve got yourself a much better announcing team with very little effort expended.

It’s like Fox replacing Tim McCarver in the top MLB booth with Harold Reynolds and Tom Verducci, before coming to their senses and pairing Joe Buck with John Smoltz (the logical move) instead. Barring last year’s playoff horror show, the duo has worked out quite well. The same could be true of Tessitore and Riddick if ESPN pulls the trigger on the easy, obvious solution.

Jay Rigdon: These are all very reasonable choices. Continuity with keeping McFarland and Tessitore together makes sense, especially as that would mean a reduction to two-person booth. Witten made plenty of mistakes, yes, but he could have been nothing but insightful and the MNF broadcasts would still have been rough to watch due to non-stop talking. So while adding Peyton Manning would obviously be fascinating, and Louis Riddick is definitely as good an analyst as ESPN has, the best option might be to just roll for a year with Tessitore and McFarland, and see how that ends up.

But if another person does have to be brought in, and ESPN can’t get Manning or considers Riddick best used elswhere, here’s a name they should consider just for pure entertainment potential: Jay Cutler. Cutler was almost in a booth for Fox during the 2017-2018 season until he went to the Dolphins for a year. Now apparently retired, he’s spending his time being the only reasonable person on an E! reality series.

Jay is a national treasure and the most likable person on the entire E! network pic.twitter.com/IhD1aaXeAJ

Would Cutler be Tony Romo? No, not at all. He’s more reserved, and more dry, but that’s the sort of presence that sounds pretty good compared to Witten’s blundering, and it could complement McFarland as well. Cutler also played very recently, which is never a bad thing for an analyst, and there’s obvious potential for comedy, both intentional and unintentional.