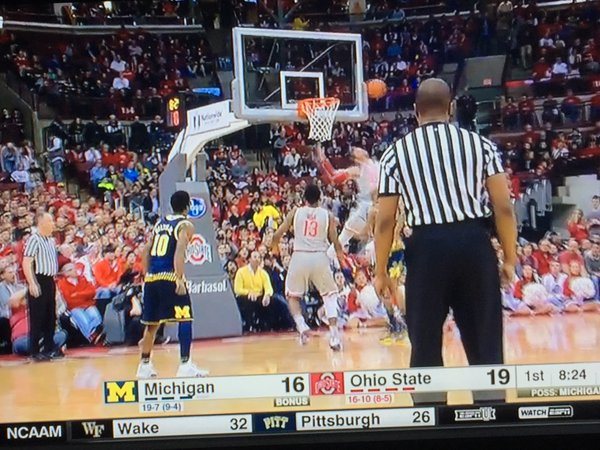 Networks are always trying to find new broadcasting innovations, but not every new idea is a good one. One that certainly doesn’t seem positive so far is ESPN’s decision to extensively use a floor seats-level camera during Tuesday’s Ohio State – Michigan basketball broadcast.  ESPN announced last week the game “will feature a “Floor Seat” treatment, where the majority of the game will be shown from low-angle seats, as if fans at home are watching from courtside.”  The backlash was remarkable, with Twitter erupting in criticism and only six percent of over 2,100 poll respondents praising the feature (64 percent said they hated it outright, 30 percent wanted it used more selectively). Why did this draw such criticism, and are the critics right? Let’s take a look at some of the screengrabs. 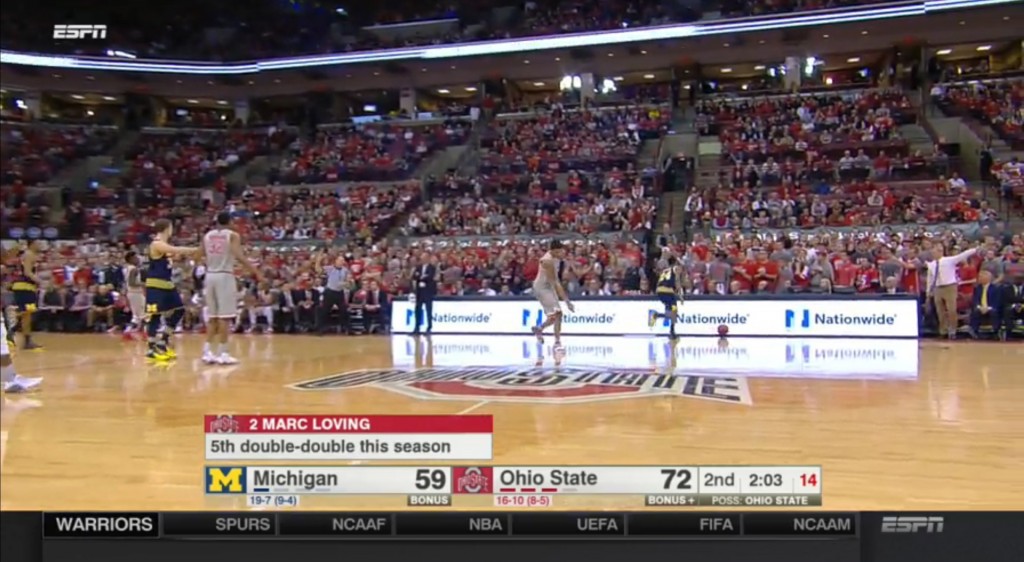 In this one, we see the problems with doing this from just one side. It’s almost impossible to make out the action or the ball at the far side of the court. Perhaps if you combined this with Fox’s old glow puck, it would be easier to track the ball, but a better plan would likely be stationing a camera on each sideline, or cutting to a more traditional angle when the action wasn’t near the camera. This simply isn’t good enough to see long-range action even when the view is unobstructed. What about when it is obstructed?

Every jump shot is like its own mini trivia game: Did this Zak Irvin shot go in? pic.twitter.com/P25SH2m7Ta

Yeah, having the ref’s head right in the way of the basket certainly isn’t ideal. There also are problems with picking out the three-point line, which is ironic considering how ESPN’s tried to innovate on that front (again, without a ton of success) in the NBA. Here’s an example: 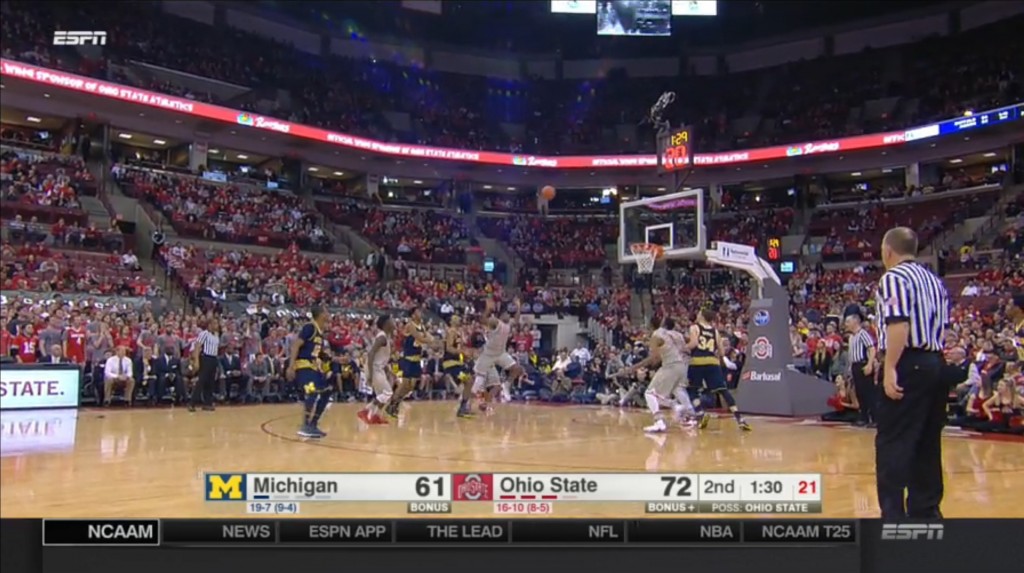 This is a shot launched from the far corner, where you can’t see the three-point line from this angle even without people in the way. There’s no way to tell if it’s a two-point or a three-point shot without the announcer quickly identifying it. Meanwhile, a normal camera angle would have seen this perfectly.

It’s not that this floor cam can’t potentially be a useful tool in a network’s toolbox. It would be great to be able to cut to it on close plays near the out-of-bounds line, or for replays from a different angle. That approach has worked well with the new pylon cams in football. However, what ESPN did Tuesday was akin to broadcasting a whole football game from the perspective of the pylon cam. One prominent football personality and Michigan alum certainly wasn’t a fan:

To say I intensely dislike this angle to watch this Michigan-Ohio St game is an injustice to the world intense or dislike.

At the very least, they’d need a camera on the other side to make this work, and it probably would work best with at least one traditional camera (as the main feed) as well. For now, the downsides of this floor seat cam don’t seem to live up to the benefits. Even an ESPN camerawoman working the game appears to have admitted that:

We’ll see where ESPN goes with this idea from here, but many seem to be hoping that they either shelve it entirely or use it in a much more limited fashion. Unless they find ways to fix the issues with this approach, the “Floor Seat” cam may be consigned to the dustbin of history with other poor broadcasting “innovations.”