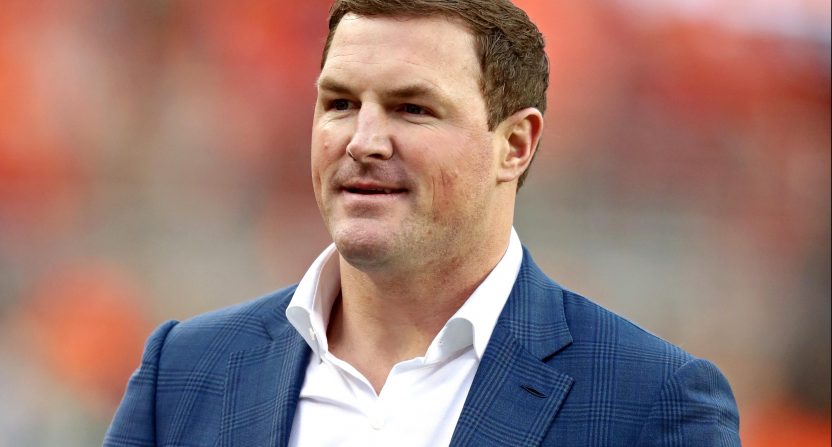 Jason Witten’s broadcasting career is over, for now at least. On Thursday, the Dallas Cowboys announced that Witten would be ending his retirement and returning to the team for the 2019 season.

Jason Witten has decided to end his retirement and return to the #DallasCowboys for what will be his 16th season.

Here’s what Witten had to say about his decision, via the Cowboys.

“The fire inside of me to compete and play this game is just burning too strong,” Witten said in a statement. “This team has a great group of rising young stars, and I want to help them make a run at a championship. This was completely my decision, and I am very comfortable with it. I’m looking forward to getting back in the dirt.”

And here’s ESPN’s brief statement about Witten’s decision, which doesn’t say much of anything.

“We thank Jason for his many contributions to Monday Night Football and to ESPN over the past year and wish him continued success. We have seen many former coaches and players go into broadcasting before eventually returning to the game they love, so we understand Jason’s desire to return to the Dallas Cowboys. In the coming weeks, we will determine our MNF plans for the 2019 season.”

Witten retired from the Cowboys last year, joining ESPN as the primary analyst on Monday Night Football for a reported salary of over $4 million a year. He’ll reportedly make $5 million with the Cowboys this year. It was all downhill from there for Witten, an underwhelming broadcaster who was widely criticized for his work in the MNF booth. Witten desperately needed to improve his work in 2019 if he wanted to be a broadcaster long-term, and he’s apparently eschewing working on his commentary in order to get back on the field.

Back in December, in the face of terrible reviews and widespread scorn, ESPN announced that the new MNF trio of Joe Tessitore, Booger McFarland, and Witten would return in 2019. The Cowboys reportedly approached Witten in the fall and tried to persuade him to return to the field, an attempt that was unsuccessful…until now.

ESPN defended the new MNF team to a staggering degree, even opting to push McFarland and Witten onto NFL Draft coverage (which, presumably, will include just McFarland now). The Tessitore/McFarland/Witten trio ranked last in last fall’s NFL announcer rankings, drawing the lowest score we’ve ever seen for any crew in any sport, and whoever replaces Witten in the booth will have a low bar to clear to be an improvement over.