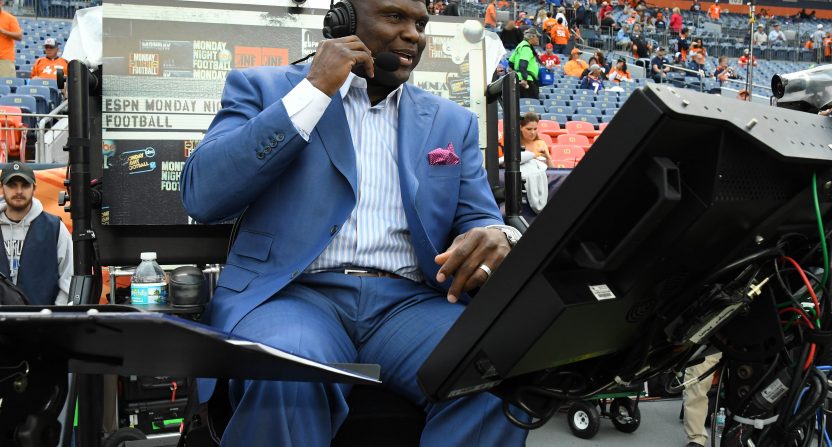 We may have, thankfully, seen the last of the BoogerMobile. On Wednesday, John Ourand of the Sports Business Journal reported that Booger McFarland would be taking up a spot in ESPN’s broadcast booth alongside Jason Witten and Joe Tessitore, rather than spending the game at field level in a ridiculous cart, for the Texans-Colts playoff game on Saturday.

Last week during the Monday Night Football season finale, McFarland was shunted upstairs from his cart due to the possibility of inclement weather. With his week’s game in Houston taking place under a retractable roof, weather isn’t an issue at all, so one could reasonably assume that ESPN has made this decision either at the request of the NFL or because of the realization that the BoogerMobile wasn’t working at that the network needed to look at other options for 2019 if they wanted to keep this trio together.

Yesterday, the future of the MNF booth was one of our top sports media stories to watch in 2019, with special attention being given to McFarland and his role, either at field level or in the broadcast booth. A couple of weeks ago, it was reported that ESPN would be shelving the BoogerMobile (unsurprisingly) for the international broadcast of the Super Bowl, so the news today about the BoogerMobile being eliminated for the Wild Card game will make it three in a row without the sideline cart. We’ll see if that streak continues further into 2019, but the tea leaves seem to indicate that we’ve seen the last of this unorthodox (to put it mildly) broadcast setup.