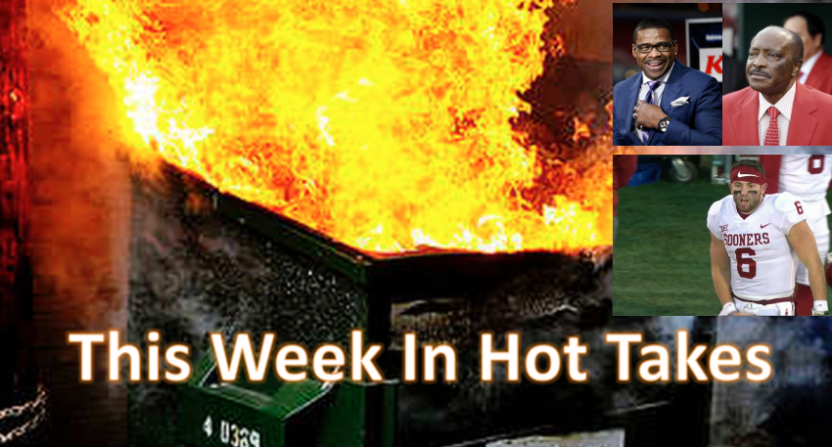 Welcome to a post-Thanksgiving edition of This Week In Hot Takes! Here’s a look at the hottest takes from sports media figures from November 17-23.

5. Skip Bayless thinks Russell Wilson could have kicked a 52-yard field goal: There’s exaggeration for effect, and then there’s this:

I believe Russell Wilson would have kicked the 52-yard field goal that Blair Witch Project missed short. Russell is that incredible in 4th quarters.

Field goals from that far out are incredibly difficult for even NFL kickers, as we saw with Blair Walsh’s miss in that situation. But sure, Skip, sure.

4. Stephen A. Smith calls Baker Mayfield and Lincoln Riley “too dramatic”: Stephen A. “THE WEED!”Smith should be the last person to say that anyone else is too dramatic, but that’s what he did this week. Following Oklahoma’s announcement that quarterback Baker Mayfield wouldn’t start on senior day against West Virginia and wouldn’t be a captain thanks to his crotch-grabbing antics against Kansas, Mayfield gave an emotional press conference about what being a captain meant to him. Sooners’ head coach Lincoln Riley also got emotional about Mayfield and his importance to the program. Naturally, Stephen A., a man known to lose his mind and go off on an unhinged rant at the slightest provocation, decided to say Mayfield and Riley were being “too dramatic”:

“And because you’re not going to start the game and play the first couple of minutes … that’s why they’re crying?!”

Look, Stephen A. knows bad acting given his own vast experience in that area, from First Take to General Hospital, but both Mayfield and Riley seemed pretty sincere with their comments, and it’s understandable why this punishment was significant to both. And Stephen A. accusing anyone else of being too dramatic is the height of hypocrisy.

3. Michael Irvin says “Playing OL is as easy as anything”: One problem with the amount of quarterbacks and wide receivers employed as NFL analysts relative to other positions is that the challenges of those other positions can be overlooked or downplayed. Of course, smart analysts use their own playing experience as a starting point rather than the be-all end-all, and do their research and homework to be able to talk about other positions effectively. And then you have NFL Network’s Michael Irvin, who decided to insist that playing offensive line is “as easy as anything”:

Irvin rightly got called out by Packers’ tackle David Bakhtiari:

Flat out disrespectful. Like me saying “WRs should catch any and every ball thrown to them. It’s just catching a ball..” come on man you’re better than that. ??‍♂️ https://t.co/ohFTtuSQnA

2. Joe Morgan writes over-the-top dumb letter to Hall of Fame voters: Morgan, the Baseball Hall of Fame member as a player and long-time ABC, NBC and ESPN broadcaster who’s a candidate for the HOF’s Ford C. Frick Award this year, sent a mass e-mail with the help of the Hall to all voters this year with some very over-the-top language about steroid users:

The more we Hall of Famers talk about this – and we talk about it a lot – we realize we can no longer sit silent. Many of us have come to think that silence will be considered complicity. Or that fans might think we are ok if the standards of election to the Hall of Fame are relaxed, at least relaxed enough for steroid users to enter and become members of the most sacred place in Baseball. We don’t want fans ever to think that.

We hope the day never comes when known steroid users are voted into the Hall of Fame. They cheated. Steroid users don’t belong here.

Players who failed drug tests, admitted using steroids, or were identified as users in Major League Baseball’s investigation into steroid abuse, known as the Mitchell Report, should not get in. Those are the three criteria that many of the players and I think are right.

…By cheating, they put up huge numbers, and they made great players who didn’t cheat look smaller by comparison, taking away from their achievements and consideration for the Hall of Fame. That’s not right.

…I care about how good a player was or what kind of numbers he put up; but if a player did steroids, his integrity is suspect; he lacks sportsmanship; his character is flawed; and, whatever contribution he made to his team is now dwarfed by his selfishness.

Morgan’s letter, like many arguments against voting for steroid users, conveniently ignores all the other cheating over the years by Hall of Fame members, from amphetamines to scuffed balls. And it conveniently ignores all the character issues those already in the Hall have. And it ignores the steroid users already in the Hall. But what’s particularly ridiculous is the way Morgan made this case, and the way the Hall allowed him to send this to all voters. Yahoo’s Jeff Passan wrote that this was the final straw that convinced him to give up his Hall of Fame ballot, and he makes valid points, especially when it comes to Morgan’s attacks on particular players:

And that’s the sad part of this all: There’s now an active campaign by the Hall against particular players. One Hall of Famer, who says he has the backing of plenty more, is smearing players on this year’s ballot to the group of people expected to render fair and reasoned judgments. That’s not guidance. It’s the Hall telling voters what it expects.

My ballot will arrive this week. I will not fill it out. I will not participate in this charade where the shepherds charged with telling the story of baseball want to avoid telling the ugly parts. I will not even though players like Edgar Martinez really could use my vote. Sorry, Edgar. Blame Joe Morgan’s sanctimony for this one.

It’s a pity that Fire Joe Morgan isn’t still around to give Morgan’s letter the treatment it deserves. (Mike Schur is probably a little busy working on The Good Place, although he might weigh in on a Poscast.) But this is one more reason to be thankful Morgan is no longer an active broadcaster.

1. Berry Tramel calls Baker Mayfield’s crotch grab “repugnant”: Oklahoman columnist Tramel has long been known for some hot takes, and boy, did he deliver this week, claiming the highest-possible horse of moral outrage over Mayfield’s actions.

But Mayfield apologies are wearing thin. Which is why it’s time for Lincoln Riley to show he’s serious about running a class program.

Mayfield must be suspended for the West Virginia game Saturday.

That’s a serious step. It would imperil Mayfield’s Heisman Trophy campaign, which was reaching landslide status in recent weeks. Even more, it would imperil OU’s College Football Playoff hopes.

…This isn’t planting a flag on Ohio Stadium’s midfield. That was harmless high jinks. This is repugnant behavior, and it doesn’t matter if it’s Jameis Winston in the Florida State student union or Baker Mayfield on the green grass of KU’s Memorial Stadium. When you’re ashamed to have your wife and kids walking through a commons or watching an OU football game, there’s a major problem.

Mayfield already has used his get-out-of-jail-free card. After his February arrest for public drunkenness in Fayetteville, Arkansas, complete with video, Mayfield’s discipline was kept in house.

Mayfield’s actions were a bit much, but arguing for a game’s suspension seems excessive. And why is Tramel worried about wives seeing a crotch grab? But calling this “repugnant behavior” is the real hot take. Insult comic Brain finds that repugnant: