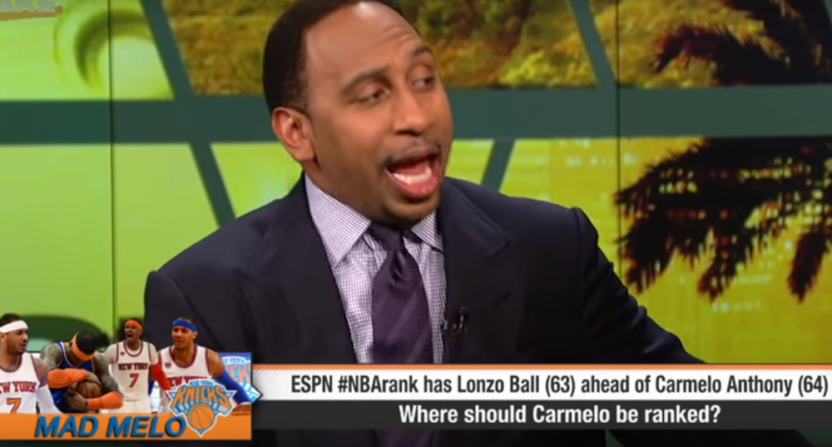 Plenty of NBA players called out player rankings from ESPN and Sports Illustrated Tuesday night, and now Stephen A. Smith has committed some ESPN-on-ESPN crime, going off on his own network’s rankings on First Take Wednesday.

Smith called the ESPN rankings “a disgrace” and “an embarrassment,” and said “the damn network should be ashamed for having the poll,” particularly over its low rank (#64) for Carmelo Anthony (who had his own criticisms of the rankings on Instagram):

“Just because we all work at ESPN together, don’t believe we all believe the same things. We do have independent personalities, and you’re looking at one. This poll is a disgrace, it’s an embarrassment, and as far as I’m concerned, the damn network should be ashamed for having the poll! Who the hell came up with this list?! Because they clearly know nothing about the game of basketball! I don’t want to hear something about some garbage criteria that you came up with.”

“There are 30 teams in the NBA. By putting 63 players ahead of Carmelo Anthony, you’re saying that at least two players on every team are better than Carmelo Anthony, a career near-25 point per game scorer who’s repeatedly a number-one option, who’s a scoring machine, and one of the prolific scorers of the modern era. Has he slipped in recent memory? Of course he has, primarily due to injury, we get all that. But even then! Last year, 22 points, the year before, 21 points, the year before that, 24 points. This dude can score on anybody.”

“You have been on the record talking about James Dolan, what a garbage owner he is. We know what a moribund franchise the New York Knicks have been. Carmelo Anthony, can he be criticized for always going for the money, not prioritizing winning over money? Fair enough, I get that. But when you tell me number 64, you’re saying that 63 players from a talent perspective is better than this man? It is disgraceful, it is garbage, and I am sick and tired of people hiding behind the brand that is ESPN, pretending to know a damn thing about basketball, when they clearly do not. There is no one, I repeat no one, with knowledge of the game of basketball who would look at the NBA today and say that 63 players in the NBA are better than Carmelo Anthony.”

This then cuts ahead, with Molly Qerim asking Smith about Anthony making the rest of his team better, and Smith responds “Once again, once again, they don’t know basketball. It’s just that simple. And listen, I’m just going to call it what it is. I don’t give a damn that they work at the same company as me. You don’t know basketball! There’s not 63 players in the NBA better than Carmelo Anthony! Let’s also take a couple of facts. If Carmelo Anthony averages 20 points a game this coming season, he will be only the third player in NBA history to do it consistently over 15 years. Michael Jordan and Kareem Abdul-Jabbar are the other two. That’s number one.”

“Number two, let’s look at the players they have on this list instead of Carmelo. Danny Green of the Spurs? (Max Kellerman interjects “Ridiculous.”) Harrison Barnes of the Dallas Mavericks? (Kellerman interjects “Ridiculous.” again.) Danilo Gallinari? Who was on the Denver Nuggets? (Kellerman: “Who was traded with 11,000 other players for Carmelo Anthony?”) Listen, I like Jrue Holiday from the Pelicans, but is he better than Carmelo Anthony? (Kellerman: “No.”) This is just disgraceful, okay? It makes no sense whatsoever. Now I understand that you take things into consideration, let me tell you what they don’t take into consideration. What your job description is and what the load is that you carry.”

“Carmelo Anthony does not play good defense, that is fair, Max, you are accurate. And here might be the reason why. Because when you know you’ve got to carry the load offensively, right or wrong, people tend to slack off on the defensive side of the ball, because they prioritize the fact that they’re the number-one option offensively. Whether it was in Mike Woodson’s offense, whether it was in Mike D’Antoni’s before Mike Woodson, whether it was the cats after him, the reality is that you have to deal with that. So ultimately, what it comes down to is ability. We don’t sit up here and just look at metrics, we don’t look at the collateral impact that they have, we look at ability, because the bottom line is that when you get paid those dollars, you know why we look at those dollars? Because we ask what you bring to the table. Carmelo Anthony, we can debate the top-30, I say top-20, but don’t tell us that 63 players, and it is disgraceful that we have to talk about it. We embarrassed, we embarrassed, our brand when it comes to basketball by putting out bogus stuff like that.”

Those are strong criticisms from Stephen A., especially when it comes to an ESPN product. But the company probably doesn’t mind overall; as we saw with Ron Jaworski on Johnny Manziel a few years ago, these kinds of provocative takes wind up generating content all across ESPN’s platforms. In fact, the ESPN NBA Rankings (51-75) page has links to all sorts of ESPN takes on the rankings. So whether they’re “garbage” or not, they’re certainly drawing attention to ESPN and providing content for its personalities to debate.