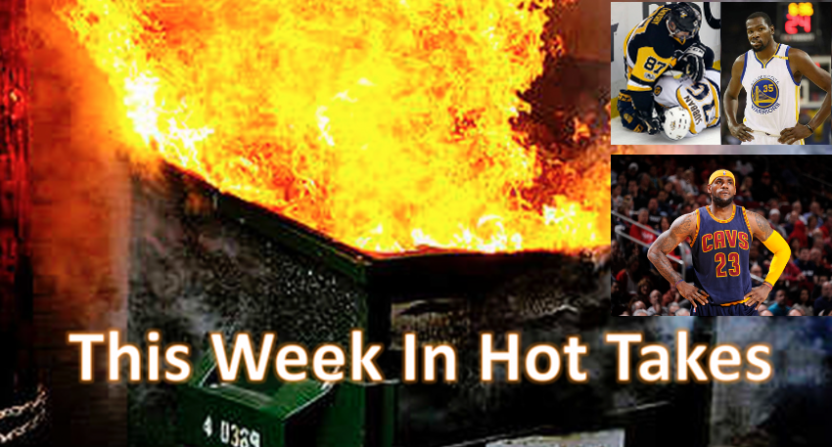 Welcome to another edition of This Week In Hot Takes! This time around, we’re looking at the hottest takes from sports media members between June 2-8. Let’s fire up the takeometer.

5. Colin Cowherd calls Golden State “a team of millennials,” talks about “what millennials look for”: “Millennials are killing X” is a pretty regularly-occurring and pretty stupid media hot take, and now Fox’s Cowherd is bringing it to sports. On The Herd Monday, Cowherd went on and on about how the Warriors “are all millennials”:

Yes, most of the Warriors’ stars probably count there in some way. “Millennial” age ranges differ depending on who’s talking about it, which helps to show how dumb the term is in general, but even the latest start date listed there is 1982, which makes everyone 35 or younger “a millennial” (so the majority of the NBA). Cowherd would do better to get the ages right, though; he says Golden State’s stars are “23, 24, 25, 26, 27,” but Steph Curry is 29, Kevin Durant is 28, and Klay Thompson and Draymond Green are both 27, so he’s exaggerating their youth with this framing effect.

Beyond that, this take gets particularly dumb when Cowherd starts quoting one of the many ridiculous articles on “what millennials look for” (without even citing where the story’s from), saying it’s applicable because “they’re all millennials,” and saying they look for “purpose, fluent in collaboration, team-based projects, impact over individuality of the greater good, for something special in an employer,” and then saying “My generation was a me, not an us” and attributing that to criticisms of the Warriors from the likes of Charles Barkley. Yes, there’s a point that not all of today’s players behave the way Barkley et al would like, but that doesn’t necessarily have much to do with birthdates. It would be ludicrous to say Cowherd has particular thoughts and goals just because he happens to be 53, and that all of those are shared by everyone his age; why is it acceptable to keep lobbing these kinds of takes about millennials?

4. Mike Milbury says P.K. Subban “had it coming” after Subban gets his head repeatedly bashed on the ice: Thursday night’s Game Five of the Stanley Cup Final saw the Pittsburgh Penguins’ Sidney Crosby and the Nashville Predators’ P.K. Subban continue their feud, with the two getting tangled up behind the net and Crosby repeatedly slamming Subban’s head into the ice. The officiating crew decided to hand out offsetting penalties for some reason, perhaps based on Subban holding Crosby’s leg (which doesn’t seem in the same realm of significance here, but inconsistent NHL officiating isn’t exactly new). And NBC’s Mike Milbury was then positively gleeful about this at intermission, saying “Subban had it coming”:

“I watched the smile on your face. That type of play just delivers such joy to you.” “It was, because it was cagey, and Subban had it coming.” Yes, making funny comments about Crosby saying he had bad breath is totally justification for having your head repeatedly pummeled into the ice.

3. Skip Bayless says LeBron doesn’t have “the clutch gene,” isn’t an all-time great because of how he played at the end of Game Three: The Warriors’ final-minute recovery to beat the Cavs Wednesday spawned plenty of takes, and unsurprisingly, some of the hottest came from professional LeBron James critic Skip Bayless. It started on Twitter Wednesday night, where he began firing off the ALLCAPS takes long before the final minutes:

WHAT IS LEBRON DOING NOT SHOOTING THAT FIRST SHOT OF THE HALF RIGHT AT THE RIM? IS HE GOING TO DEFER NOW???

COME ON LEBRON ATTACK KLAY THOMPSON. CAN'T KEEP YOU FROM THE BUCKET.

WHY IS LEBRON TAKING AN EXTREMELY DIFFICULT FALLAWAY WHEN HE CAN TAKE IT TO THE BASKET WITH A FOUR-POINT LEAD???

The last two minutes of that game were an all-time disaster for LeBron James and the Cleveland Cavaliers, who will now get swept.

It then continued on Undisputed Thursday, where Bayless said James threw the series away and can’t be on the NBA’s Mount Rushmore:

"I should just go ahead and be the first to congratulate the Warriors on winning the 2017 Finals & KD for being the MVP." – @RealSkipBayless pic.twitter.com/BUffvVhuSG

“Up four, King, King’s house, King’s throne, defending champs, make it or break it, do or die, sink or swim, season on the line, playoffs on the line, the whole NBA playoffs are teetering on this moment. If he’s a Mount Rushmore player, he needs to close that deal. If he is The King, I’m going to dump most of the blame at The King’s feet, 90 per cent of the blame at The King’s feet. …The King went from Mount Rushmore to the basketball equivalent of Death Valley. He did everything that I have criticized him for and exhorted him not to do for about 14 years on national TV. …Once again, he drifted and he disappeared in clutch situations. I just don’t think he has the clutch gene.”

Yes, because there’s totally a clutch gene, and because performance in the final minutes of one particular game is totally how players should be evaluated historically. That’s a small sample size within a small sample size, and it’s notable that Bayless never delivers the reverse take for those times when James has been heroic late in games. (Like say, last year’s Game 7 of the Finals?) This is one more excuse for him to blast LeBron, and it isn’t a good one.

2. David Fleming says Crosby and Malkin’s legacies are on the line: One of the worst hockey columns in a long while came from someone who doesn’t regularly cover hockey. That would be ESPN’s David Fleming, who penned “Front and centers: Legacies on the line for struggling Sidney Crosby, Evgeni Malkin in Game 5.” Let’s explore some lowlights:

Scotch-taped over every inch of available wall space above lockers, on the bathroom walls and even in the hallway leading to the ice, was a greatest-hits collection of every sports motivational platitude known to man. They have put up the posters now for a few years, but this time unfortunately it ended up transforming the dressing room of the once-fierce defending Stanley Cup champions into something resembling a junior-high camp counselor’s office.

The temporary display included such hits as: Attention to Detail. Just Play. Hunt. Own it! And even the all-time work retreat classic — TEAM: Together. Everyone. Achieves. More.

The decorations were an odd and seemingly desperate gesture for a team trying to get its collective mind right before the series slipped away. Yet, as far as I could tell, the only cliché the Penguins didn’t have on display was the one message superstars Sidney Crosby and Evgeni Malkin needed most.

Four games into this Stanley Cup Final, that’s one message that has not gotten through in Pittsburgh’s dressing room. Trailing the Preds 3-1 near the end of Game 4 on Monday night in Nashville, the Penguins pulled their goalie, allowing for Crosby and Malkin to skate together. The result was something less than magical and pretty much exactly what you’d expect in a series in which Crosby and Malkin have seemed to inexplicably shrink from the pressure and vanish for long stretches at a time.

This whole column could be taken from Bad Sports Clichés 101, and it’s pretty close to the previous take Bayless dropped. Being “the Skip Bayless of hockey takes” is not a good thing, David. Especially when it comes to saying players who have already won two Stanley Cups, posted countless incredible personal stats and won tons of awards have their “legacies on the line.” This column was roundly roasted by hockey fans everywhere, especially with it coming after ESPN axed so many talented hockey writers, and it deserved that roasting. This is one of the worst takes this year.

1. Stephen A. Smith loses his mind about LeBron’s fourth-quarter play: If ever Stephen A. deserved the “Screaming A” nickname, it’s here, as he spends most of this six-minute clip yelling at Max Kellerman about how James’ stats from the game don’t matter, but his fourth-quarter ones do.

A fun part of this is at 3:43: “I AM HOLDING THE FOURTH QUARTER RELEVANT! IT MATTERS, BRO! YOU CAN’T SAY LEBRON HAD 39, DAMN NEAR A TRIPLE-DOUBLE, I GOT IT, BUT WHEN THE FOURTH QUARTER ARRIVED, WHEN CRUNCH TIME ARRIVED, THEY SHOT ONE FOR TEN ON CONTESTED SHOTS! MY POINT IS, I’M LOOKING FOR YOU, BRO!”

Another outrageous part can be seen here:

“If you’ve ever heard of a champion…A CHAMPION! THAT’S ONE OF THE GREATEST PLAYERS IN THE WORLD! SIT UP THERE AND GO LIKE THIS, “Well, look, I’m doing all I can, I’m averaging a triple-double.” WHO SAYS THAT?! WHILE YOU’RE PLAYING?! WHEN IT’S OVER, YES, BUT YOU DON’T SAY THAT WHEN YOU’VE GOT GAMES TO WIN!”

Congratulations, Stephen A., you managed to outdo your former debate partner Bayless in irrational LeBron-bashing. That’s not easy.