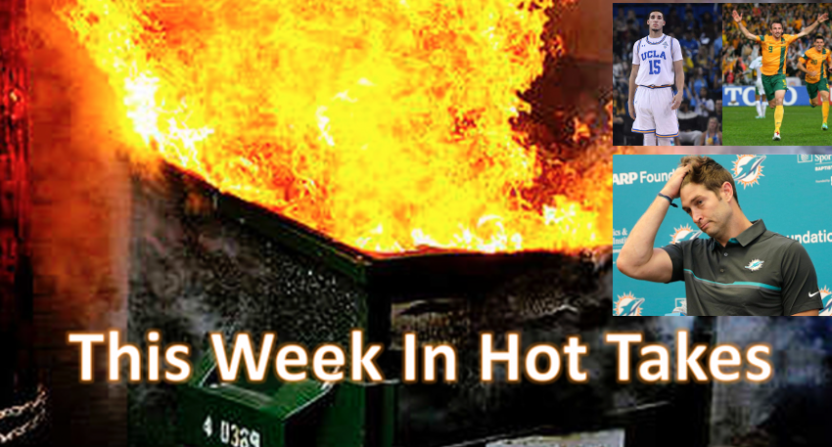 Welcome to another edition of This Week In Hot Takes, this time looking at the hottest sports media takes from Nov. 10-16. Let’s get to it.

Greenberg took a lot of criticism for his vehemence here, but Yahoo Sports’ Pat Forde endorsed it and even argued for expulsion for the players:

Ridiculous — and I like Jay. But not on this one. Full-season suspension or outright expulsion, one or the other.

Look, opinions can and do vary on how severe the punishment for these players can be, and a case can be made that Williams’ push for just a couple of games was too light. But ranting about it on-air the way Greenberg did isn’t the best way to make that case, and neither is going even further with the suggestion of expulsion the way Forde did. Those are some hot takes.

4. Phil Mushnick (again) bashes foreign NCAA players: Surprisingly, New York Post columnist Mushnick’s hottest take this week comes not from any of his many terrible-overall columns, but from a Veterans’ Day column that’s generally pretty good otherwise, focusing on two New York Giants’ players who lost their lives in World War II. And then, after some silly ramblings about NFL tackling, he really ruins it by going back to one of his favorite nonsensical complaints, foreign NCAA players. Here are some lowlights:

Here, there, everywhere, Division I colleges are losing money along with their missions and minds for what? To win ballgames.

The University of the Pacific, in Stockton, Calif., heavily recruits from across the Atlantic. Its current field hockey team includes eight women from South Africa, two from Belgium, one each from Spain and Holland. Whatever it takes!

Pacific last year exceeded its athletic budget by $4 million. Its men’s basketball program was sanctioned and fined by the NCAA for illegal recruiting, academic fraud and providing investigators with false information.

Tuition to the private college this year was raised 4 percent to $48,000 per student — not including housing and food. It’s crazy. But winning ballgames remains many colleges’ highest, most expensive and most shameless priority.

None of that makes much sense, Phil. If your complaint is that the school is spending too much on athletics, fine, but players’ nationalities don’t particularly affect that. And neither do the men’s basketball sanctions; they don’t have much to do with field hockey or tennis. So the school should be spending the same amount of money on athletic scholarships for less-talented American players so they can lose more competitions? Right. This is just bad jingoistic nativism, and it’s depressing that Mushnick continues to have a platform to trot these arguments out..

3. Aussie rules journalist Mike Sheahan attacks soccer for…having draws? It’s always fun when those who cover one sport weigh in to bash another without much knowledge or research, and that seems to particularly happen with soccer. The latest case comes from Australia, where AFL (Australian Football League, or Aussie rules football) journalist Mike Sheahan went off on soccer after the first leg of the Australia-Honduras World Cup qualifier:

Football commentator Simon Hill on Tuesday defended the Socceroos and the world game in the face of a bizarre attack from veteran AFL journalist Mike Sheahan. Discussing Australia’s 0-0 draw with Honduras in the first leg of their World Cup qualifying tie on Saturday, Sheahan slammed the 90 minute display as “rubbish”.

“I couldn’t believe what (football) served up in Honduras. It was played on a cow paddock, no goals were kicked, and if there was a highlight I missed it,” Sheahan told SEN on Monday.

“If this code is as big as it is … the Hondurans are coming out in a cattle truck and the Australians came home in first class. The AFL wouldn’t do that. Why wouldn’t FIFA get involved?

“How do you have an event where your aim is to not win it?

“It’s just to hold them to a draw. It’s not about goals? You go across the world to not win a game of the sport?”

Hill didn’t understand why Sheahan — who isn’t involved with football in a professional capacity — would comment on a sport he has no attachment to and is no expert on.

“If he doesn’t like the game, why is he watching it?” Hill told SEN Breakfast today.

Why indeed, Simon. Why indeed. Also, really,  the biggest complaint is that Australia picked up an away draw, paving the stage for their home win and their World Cup berth? Plenty of Australian soccer fans are probably fine with that outcome, even if Sheahan isn’t.

2. Ryen Russillo says millennials are “terrible for society”: Nonsensical millennial-bashing is practically an industry at this point, and ESPN Radio host Russillo is the latest to cash in on it.

Millennials: Terrible for society but great for the NBA@ryenarussillo tells you why ??? pic.twitter.com/v291atq6mu

“Nobody likes the arrogant millennial at the office, look, I’ll admit I don’t like it either. But the way these young players are playing in the NBA and they’re expecting to be great right away, they’re playing almost in a disrespectful manner, that’s actually a good thing. These young guys are not coming into the league being polite, they’re coming into your house and they’re putting their feet up on your coffee table without even introducing themselves. ‘Hey, I’m here.’ When you’re playing basketball…it’s not great for your everyday guy in life, but when you’re playing hoops, that’s the way you want to be. Arrogant, entitled, ‘I’m here, I’m not waiting for my thing’ millennial, who we all hate in the workforce, is great for the NBA.”

Hmm. Not sure Russillo should be the one talking about others “coming into your house and putting their feet up on your coffee table.” But sure, it’s the damn disrespectful millennials who are ruining things.

“What have I told y’all? Jay Cutler is a disease! This dude, let’s look, y’all, any team, everybody. I mean, you can say Jay Cutler’s the cure to anybody’s else’s disease. Any time you go against him, something good is going to happen! He’s horrible! He can’t galvanize anyone. …These guys look uninspired, disinterested. Any time Jay Cutler’s your quarterback, that’s usually what happens!”

“A disease,” really? It’s far from the first hot take on Cutler, but this is a lot further than most go.

Promotions now being tied to their games the road.

Side note: The Beilein Supersoaker Bobblehead is on point. https://t.co/dJzyK3k9mh