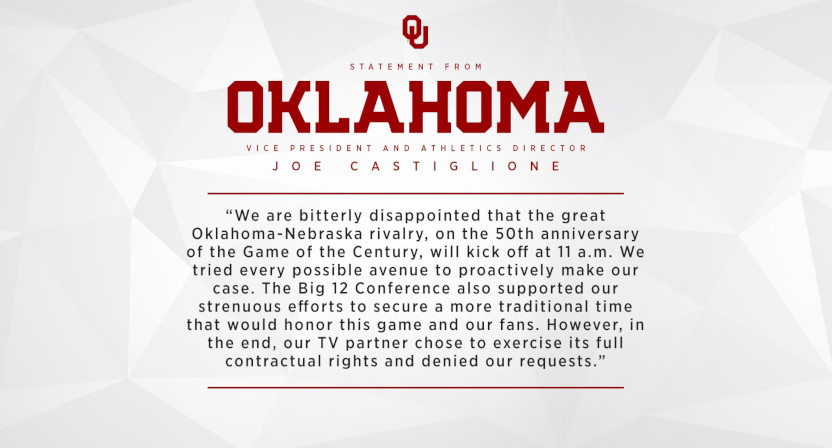 Since Fox’s 2019 launch of studio show Big Noon Kickoff and its focus on their Big Noon Saturday noon Eastern Time matchup, there’s been a lot of discussion about what games are in that noon ET slot. That slot traditionally hasn’t hosted a lot of high-profile matchups, so Fox has benefited with some excellent ratings there, and that’s also led to interesting pre-game show ratings battles between Big Noon Kickoff and ESPN’s College GameDay. But we’ve also seen significant backlash against noon ET kickoffs from fans who attend games in person, and we’ve seen some schools complaining about being put in that slot (even if it gives them less TV competition and perhaps a better channel slot than they might get normally).

The latest school to publicly complain about a noon ET kickoff is the Oklahoma Sooners, who have a history of this. In 2019, AD Joe Castiglione (who still holds that role), posted a tweet saying his department does “vigorously push” for non-noon kickoffs. This time around, the tweet in question came from the Sooners’ official athletics account, blasting their game against Nebraska on September 18 being set for the Big Noon Saturday slot:

For one, TV has perhaps triumphed less in college football than it has in professional sports. While they’ll still certainly complain about early tipoff or kickoff times that are made for national TV, NFL and NBA fans seem to have largely recognized that they don’t have the ability to change those times (and that if they don’t want tickets at an inconvenient time, someone else will probably take them). NFL fans in particular have even had to put up with late and expanding flex scheduling in favor of TV. But a lot of college football fans are still constantly pushing for times that work best for in-person attendance rather than for national TV. And those fans sometimes get what they want, and while that’s not necessarily about even the response from a large number of fans (it’s worth keeping in mind that a lot of college sports is about the desires of a few big-pocketed donors, not the desires of the wider crowd), it’s a shift worth noting.

For another thing, while equity between teams is even somewhat of a joke in the professional sports ranks (this comes up in all sorts of national scheduling discussions), it’s really non-existent in the college sports ranks. Different schools within an individual conference have radically different levels of appeal to a national TV audience. They also have radically different levels of power in the decisions that conference makes (including TV contract provisions), because they’re able to change conferences if they’re unhappy. And that’s a factor to keep in mind here.

Oklahoma’s repeated complaints about noon ET kicks clearly haven’t done much to stop them from being assigned there so far. But OU does carry a decent amount of power within the Big 12, second only to Texas. So they may have some demands about kickoff times for their games in the next wave of conference rights negotiations (the Big 12’s current deal expires in June 2025), and they may be able to implement some of those. Similarly, complaints from the likes of Ohio State may lead to powerhouse schools like that carving out some exceptions for themselves in future. We’ve already seen that with some of the discussion and backlash around Big Ten Friday night games, which have led to limited to no appearances from Ohio State, Michigan and Penn State.

Really, what’s at issue here are the conflicting desires of schools and networks. Less-prominent schools would often love these spotlight kickoff times, whether that’s on Friday nights or at noon ET Saturday. The Saturday noon games in particular are highly rated, and they can be valuable enough national exposure to prompt even Pac-12 and Mountain West schools to do it, despite these games coming at 9 a.m. or 10 a.m. local for them. (This is a less extreme version of #MACtion’s midweek games: great for individual schools’ exposure, annoying for some in-person fans.)

But, as with many things, the schools who want to do it are not the same as the schools the networks want in that slot. It’s a desirable fit for less-prominent schools (albeit still with issues for their in-person fans), but the networks (Fox, in the case of Big Noon Saturday) want the most prominent schools possible there to provide the best ratings possible. So that sets up a push-and-pull. And it also leads to debate about how many times one school, especially a more prominent school, should have to have a home game at noon ET. That’s something we may well see some limits on in future TV deals. (This is also a challenge based on who has what rights; Fox is the network that’s really emphasizing noon ET kickoffs, but they have half of each the Big Ten, Big 12 and Pac-12 rights, while ESPN has more Eastern-time schools with their deals with the ACC and SEC.)

At any rate, Oklahoma’s tweeted complaint here is highly unlikely going to lead to a change in this game’s slot. And a noon ET game on broadcast Fox against Nebraska is not bad for the Oklahoma program as a whole; it’s certainly annoying for some fans and donors, but given Nebraska’s recent struggles, that game may get much more national attention at noon ET than it would against better competition. And the decision to take this public certainly has some merits as something that athletic department can show their fans, at least as evidence of “Hey, we know you don’t like this, we tried to change it.” But it’s still an unusual step, and it illustrates some tensions that may be brewing between high-profile programs and their conferences’ broadcast partners.