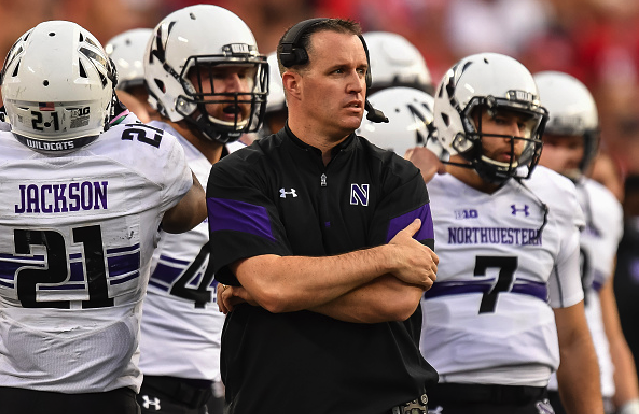 Approximately one week after the Big Ten announced that it would play some  games on Friday nights (something that’s been considered for more than two years) during the 2017 season, the conference released a six-game schedule for next year.

Here are the six games, which will be televised on either ESPN or Fox.

That’s not exactly a stellar slate of games, which was bound to happen with both Michigan and Penn State refusing to play on Fridays. Ohio State is also obviously notable for its absence on this slate, and athletic director Gene Smith expressed his preference to only play Fridays at home when school is on a fall semester break. Iowa, Minnesota and Indiana are also off the Friday hook for 2017.

Perhaps that Michigan State-Northwestern game could turn out to be important. The Wildcats, you may have noticed, are on the hook for two Friday night games next season. Coach Pat Fitzgerald already expressed his dislike for the conference’s decision, grudgingly accepting that all must bow before television. And that was before this schedule was released.

“I didn’t get a say in whether or not we were playing on Fridays. I don’t think any of my 13 brothers did either,” Fitzgerald told reporters (via Coaching Search). “The other head coaches, I don’t think we had a vote. It wasn’t ever discussed with us. I get it. I understand it. It doesn’t mean I have to like it. But I know my role, and I’ll coach the team.”

You’ll get two Friday night games and you’ll like it, Coach.

Virtually no one wants to play on Fridays and take the spotlight away from high school football, nor work on a short week. But some schools might appreciate the exposure that comes with a naturally televised game. The Big Ten’s new TV deals with Fox and ESPN will include 18 primetime games, 12 of which will be Saturday night games.

At least Northwestern doesn’t have to play Ohio for one of their Friday matchups. You are a diehard college football and Big Ten fan to watch that one. Or maybe Netflix, HBO, Hulu and Amazon will have gone down, along with a major cable outage and weather keeping you in the house. No offense to the Boilermakers (or the Bobcats), of course. We kid because we love.