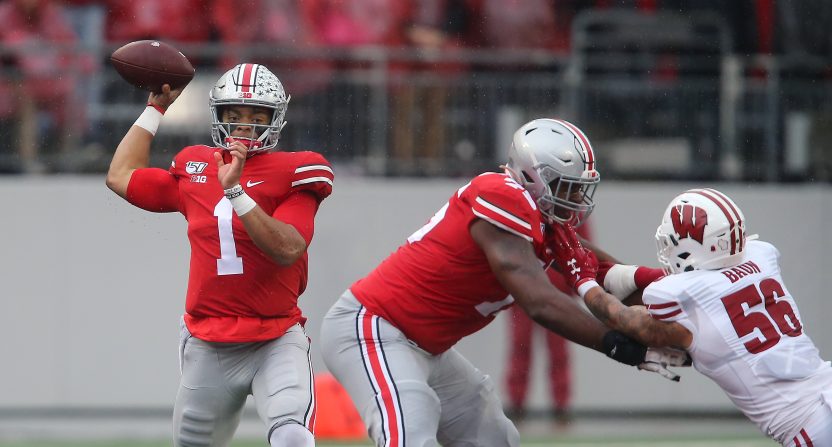 This year’s college football season has looked a little different on television with the advent of Fox’s Big Noon Saturday being added to the calendar. Before the season, Fox made the unique decision to shift their biggest game of the week outside of primetime, and even outside of the traditional 3:30 PM ET slot all the way back to the beginning of the college football day at noon ET. The noon kickoffs have included Michigan-Wisconsin, Texas-Oklahoma, Ohio State-Wisconsin, and will feature the huge Penn State-Ohio State matchup in a couple weeks. Fox is giving Big Noon Saturday the big game treatment with their top broadcast team of Gus Johnson and Joel Klatt, and the Big Noon Kickoff pregame show will even travel to Columbus for a College Gameday-esque on-site pregame show.

Fox made this move for two reasons. First, to avoid as much direct competition as possible with CBS and ABC/ESPN. CBS has long dominated the 3:30 PM ET slot with the SEC Game of the Week (see LSU vs Alabama this Saturday), while ABC and ESPN largely own primetime. One could theoretically throw NBC and Notre Dame in there as well depending on how compelling the Fighting Irish matchup is on any given week. Second, the noon kickoff as the featured slot of the day is meant to draw as many eyeballs as possible to Fox’s Big Noon Kickoff pregame show and away from College GameDay on ESPN.

So far, the strategy has worked… at least for Fox. The network has won the noon timeslot six out of the first nine weeks of the season according to Sports Media Watch.

The fanbases that are being forced to promote Fox’s Big Noon Saturday? They’re not as supportive of the arrangement.

To this point, we haven’t seen any 9 AM local time Pac-12 kickoffs (yet), so the noon kickoffs have largely centered on the Big 12 and Big 10 where Fox has rights agreements. This means schools like Ohio State, Michigan, Wisconsin, Texas, and Oklahoma are having to carry the load and feature in an abnormal number of early kickoffs for high profile games.

With Fox announcing a potential Top 5 showdown between Ohio State and Penn State for noon, both fanbases made their displeasure loud and clear.

But if you’re Ohio State or any of it’s well-reasoned fans // fires judging look at you weirdos who actually like noon games // you don’t care about ratings or the profit they generate for the network broadcasting the game.

Fox needs to acknowledge that and put these marquee games on the stage they deserve.

Penn State blog Onward State featured a number of angry tweets from fans about the scheduling decision like these:

Noon Kickoff? That's complete GARBAGE!!!!
@FOXSportsPR way to ruin the entire experience of a #1 vs #4 for the players, the fans, and anyone else involved. Whoever made this decision should be fired!!!!!

It’s an even tougher sell for fans in the central time zone where Oklahoma has had multiple 11 AM local time kickoffs for Big Noon Saturday. Earlier in the year, Barry Tramel wrote about the challenges facing the Sooners and their fans in the Oklahoman:

Such loathing goes in search of a target. OU athletic director Joe Castiglione gets the lion’s share of disgust. The networks are fingered, too, though they’re a little more difficult to find.

But the networks aren’t excited about the Big 12. And I’m hard-pressed to blame them. If it’s not OU or Texas, the remote control doesn’t stop for viewers in non-Big 12 territory, which is most of them.

There are all kinds of advantages to the Sooners staying in the Big 12, and the Oklahoma football renaissance this last half decade proves that OU made the right decision remaining in the conference.

But there are downsides. And this is one of them. Outside of the Sooners and Longhorns, no other school has geography and population to automatically draw television viewers, and no other school is producing on the gridiron to make the networks take notice.

Which means the Sooners are left to fill the gap of the suddenly prestigious but hated 11 a.m. window.

Unfortunately for these fanbases, the equation probably won’t change anytime soon. Fox has moved all their chips into the noon ET slot this season, and it’s hard to see them changing that strategy given they’ve been able to find success there, even scoring the biggest game of the weekend on occasion. Unless the Pac-12 gets really wild and crazy, Pac-12 After Dark probably isn’t morphing into Pac-12 Kegs ‘n’ Eggs any time soon. And Fox isn’t going to put Maryland-Rutgers or Iowa State-Baylor into Big Noon Saturday to pop a rating.

Therefore, logic dictates that Ohio State, Oklahoma, Michigan, Wisconsin, Penn State, and Texas will be stuck here for the foreseeable future. Perhaps the schools could try to negotiate a limit of noon kickoffs, but Fox isn’t going to play ball if it’s too detrimental to ratings and they get stuck with an Illinois-Indiana showdown.

And really, it’s understandable to see where both sides are coming from. The fans want the thrill of playing under the lights in a big primetime game (and the ability to hydrate at tailgates for more than just a couple hours). The networks want the best opportunity to score the biggest rating to justify their investment.

So who wins? As always, follow the money. And the money comes from the networks. It’s the same reason why the Big Ten controversially is playing select games on Friday nights. And it’s the same reason why Jim Boeheim was complaining about playing a conference game against Virginia in early November, calling it a “money grab” – because the network TV money said it was going to happen. Money grab? Of course it’s a money grab! All of major college athletics is a money grab! Unless you’re an athlete of course.

As long as the networks are going to continue to fork over zillions of dollars to televise these games, they could be at Noon, 9 AM, 3 AM, Friday, Saturday, Tuesday, or whenever. Big Noon Saturday will remain a thing until Fox and only Fox says otherwise. Unfortunately for the fans, they may not like it, but it’s the price of doing business.