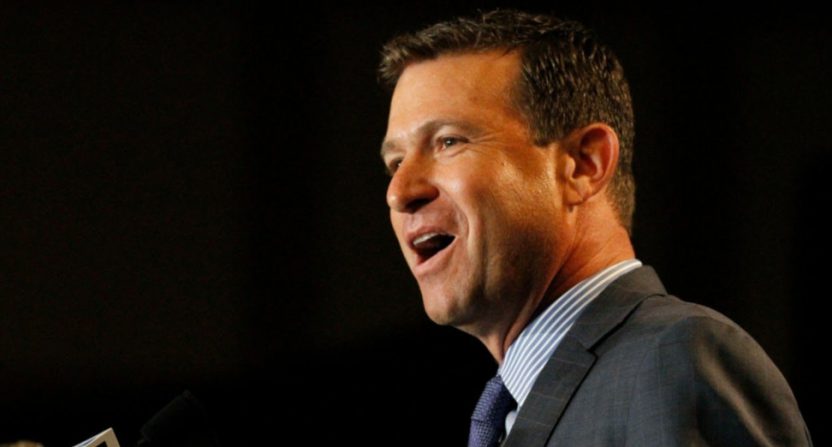 This year has seen quite a bit of talk about the possibility of Pac-12 games kicking off at noon Eastern (9 a.m. Pacific), especially with Fox’s further emphasis on the noon window this year. While that didn’t happen this season, Pac-12 head of communications Andrew Walker told Jon Wilner of The (San Jose) Mercury News in August that “several schools” were interested in playing in those early games down the road, and that’s now received further support from comments from Fox Sports president of national networks Mark Silverman (seen above) to John Ourand of Sports Business Journal in a wider piece on Fox’s college football strategies and results that was published Monday:

Fox took what [Mike Mulvihill, executive vice president and head of strategy and analytics for Fox Sports] described as a “calculated risk” and pushed its strongest game of the day in the noon window. That decision allowed Fox to launch a pregame show that would lead up to that game. Fox executives said the move has been a success — so much so that they will continue it for the next several seasons.

“It would be a special event, and I think sports fans react well to special events,” Silverman said. “We would have to make it something unique.”

On some levels, there’s some logic here for the Pac-12. The conference has TV visibility problems for a number of reasons (including their timezone, the carriage issues of the Pac-12 Networks, the struggles of past powerhouses like USC, and the apparent lower viewership interest in their teams that are doing well; Oregon and Utah were 13th and 15th in viewership out of the top 15 CFP-ranked teams this regular season), and with Fox’s noon ET window being both the primary focus of their (surprisingly well-rated) Big Noon Kickoff pregame show and the focus of their scheduling (and a well-rated focus at that, with Ourand noting that Fox posted a 15 percent CFB ratings rise year over year, with most of that growth coming in the noon window), getting in there could be an exposure win for whatever Pac-12 team decides to take that plunge.

However, there are giant hurdles there. Noon Eastern kickoffs have received pushback even from fans in the Eastern time zone, and they’re worse still for those fans if they’re in Mountain (10 a.m. local) or Pacific (9 a.m. local) Time, whether they’re attending the game in person or watching on TV. And while a noon Eastern window (especially on Fox, with how much they’ve been promoting those noon games) could lead to increased national viewership for a school, that won’t necessarily work out great for the network if fewer of that school’s fans than normal tune in thanks to the early-morning time.

And that raises one of the biggest questions with this plan. The general concept of NCAA schools or conferences going with time slots that are less favorable for in-person fans but better for television (especially thanks to a lack of competition) is well-established. And not just in the Pac-12; for example, Rodger Sherman of The Ringer had a solid piece last month on midweek evening #MACTION games. That piece covers how those games have improved the MAC’s national profile and its TV contracts, even if fewer people are watching the games in person.

Similarly, that’s why the Pac-12 has gone with #Pac12AfterDark late kickoffs and Friday games despite complaints from their coaches, and why they’ve chosen to stick with that; ESPN and Fox said the conference could play at more regular times if they chose to give back some of their TV money, and the conference said “Thanks, but no thanks.” That’s also why the Pac-12 plays its championship game on a Friday night; it’s at a terrible time for fans hoping to go in person (especially at 5 p.m. local in Santa Clara), and even for West Coast fans hoping to watch on TV, but it’s good for national TV, especially considering the lack of competition from other conferences that night.

So doing something that will benefit TV despite fan and coach protests is far from unprecedented. But a key difference with the Fox noon ET window is that it’s a singular window with one game, and it has to be a game that Fox thinks will appeal to a wide amount of the country. That sets up a competing incentive to who might actually want to play in those games. For example, a program like Oregon State might gain the most TV exposure from the noon ET kickoff relative to where their games usually air, which might make them more excited about this, but Fox seems unlikely to make a Beavers game their featured marquee matchup of the week.

At the other end of the spectrum, a team like USC is getting most of their games broadcast in pretty decent national slots anyway (certainly at least relative to many of their conference companions). So while the Trojans would be a much more desirable team for Fox to show in the noon window, they probably have less interest in doing it for one of their home games than some of the less-prominent Pac-12 teams. You never know, and if USC did opt to go for this, Fox would probably have a lot of interest (also considering how easy it is for them to head just down the road from their Los Angeles studios to the Coliseum for USC games).

Where this might actually possibly be a fit is as a home game for a team like Utah or Colorado. First, those teams are on Mountain Time rather than Pacific Time, so a 10 a.m. kickoff is less disastrous than a 9 a.m. one. (Arizona or Arizona State could also meet that qualification in November; because most of Arizona doesn’t do daylight savings time, those schools are effectively in Pacific Time in September and October.) Moreover, Utah in particular (given their 11-1 mark and #5 CFP rating going into the Pac-12 championship game this year) might have the right combination of good-enough team to draw some national interest (especially if this is for a game with a quality opponent) and team eager enough for national visibility to take a noon ET kick.

And that’s perhaps especially true considering how there was lots of talk of leaving the Utes out of this year’s playoff even if they’d won the conference as a one-loss team. That controversy didn’t happen thanks to Utah losing the conference title game to Oregon, but that close call might have them thinking about what they can do to gain more national exposure. And maybe a Colorado, Arizona State or Arizona could get there too; they might be interested in that extra visibility, and if they’re having a good enough season, they could maybe be a fit for Fox’s noon window. (Especially if some of the schools heavily featured this year, like Ohio State, push back on always playing at noon if fans continue to complain.)

With all that said, though, there’s still only one noon ET window to go around, and a lot of Pac-12 games probably aren’t Fox’s first choice there given the larger prominence of many of the Big Ten and Big 12 schools they have rights to. A look at the LSUfootball.net composite TV schedules for 2018 (even before the noon kickoff was fully emphasized) and 2019 (after it became such a big focus) illustrates how Fox has usually featured big national brands there; Fox didn’t consistently do a noon window in 2018, but the games they did show in that slot involved the likes of Ohio State (three times), Michigan (twice), Oklahoma (twice), Texas (once), and Wisconsin (once). In 2019, Fox put Ohio State there six times and Michigan there five times (Michigan also had a noon kick on ABC), plus Oklahoma twice and Texas once.

There isn’t necessarily a Pac-12 game that’s a better national draw than those schools (maybe if USC is good and is playing someone good, but even then, not necessarily), and there aren’t many lackluster matchups that would be easy to fill with Pac-12 replacements. The main disappointing one this year was Nebraska-Purdue, and that had a lot to do with Nebraska’s continued struggles. So even if a Pac-12 school is willing to do a noon kickoff, will Fox take them up on it for the big Fox broadcast? If not, it certainly doesn’t seem worth it to do that for a game on FS1. And that further reinforces that even if this does happen, it’s likely to be a pretty rare event, not something we see a whole lot of each season.

All in all, the talk of noon Eastern kickoffs in the Pac-12 doesn’t seem dead yet, even if it’s not likely to happen next year. With both Scott and Silverman saying that idea’s still in the works, and with Silverman saying he expects to see it in a couple of years, it definitely seems like this could come true in some form. But it’s worth keeping mind the challenges here; you need a school that’s eager enough for national exposure to do something that’s probably suboptimal for their fans, but that school also has to be a big enough draw to be a worthwhile use of Fox’s featured noon ET window. That’s a difficult mix to find, and that’s probably part of why we haven’t seen this happen yet.