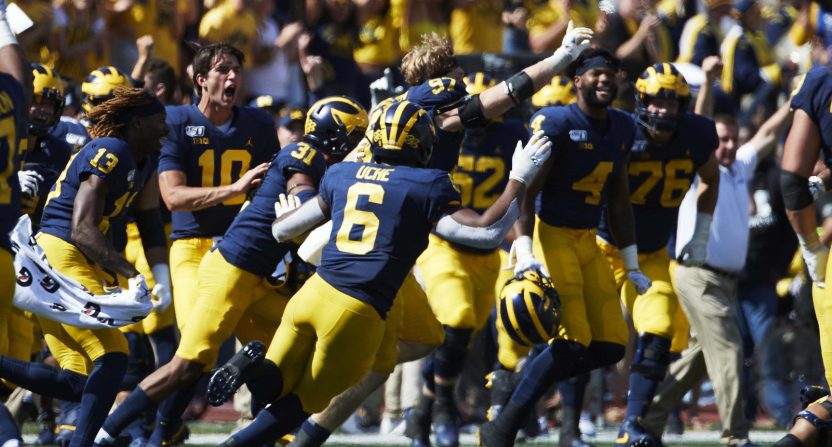 A common theme is emerging just two weeks into the 2019 college football season: Fox is achieving its goal of dominating the noon window, while ESPN’s broadcasts of the mid-day and primetime games are trouncing the competition.

For Week 2, Fox’s broadcast of Army-Michigan again won the window, drawing a 3.4 overnight, up 48% from UCLA-Oklahoma (a stronger game on paper) a year ago. ESPN will gladly point out that the four games they aired in the noon window cumulatively drew a 4.3 overnight, but we’re not going to fall into that trap. The Cincinnati-Ohio State game on ABC at noon, which I thought might give Fox some trouble a week ago, picked up an overnight of just 2.6, nearly a full point lower than Fox’s early window broadcast.

In their ratings release, ESPN threw some more shade at Big Noon Kickoff, noting that College GameDay drew a 1.5 overnight, and the second hour (head to head with Fox’s pregame show) drew a 1.7. Fox did not tout the overnight rating for their pregame show.

The rest of the day, however, was all about ESPN’s games. The LSU-Texas game in primetime was the weekend’s most watched game, drawing a 5.8 overnight that was up 190% from Penn State-Pitt last year and even up 9% from Oklahoma-Ohio State two years ago. Texas A&M-Clemson was the second-most watched game of the weekend with a 4.7 overnight, up 124% from Colorado-Nebraska last year and 74% from Pitt-Penn State two years ago. Those two games are the two highest-rated games of the season, and the six highest rated games of the season have all aired on ESPN networks, including the Week 0 Miami-Florida matchup and three Week 1 games (Oregon-Auburn, Notre Dame-Louisville, and Houston-Oklahoma).

Looking ahead to Week 3, expect more of the same from Fox and ESPN. Fox has Ohio State-Indiana, which might be more fun than any of us expect. ABC’s got the Pitt-Penn State matchup that has drawn lukewarm viewership over the last two years. No one is going to get too excited for Kansas State-Mississippi State on ESPN. Later in the day, Fox has Arizona State-Michigan State in mid-day, and Oklahoma-UCLA in primetime, while ESPN has Stanford-UCF and Florida-Kentucky and ABC airs USC-BYU and Clemson-Syracuse. You don’t need to squint very hard to see Fox being competitive in all three windows (not just the early window), and if there’s any week where Fox can compete all day, it’s during a Week 3 that lacks a real marquee game.