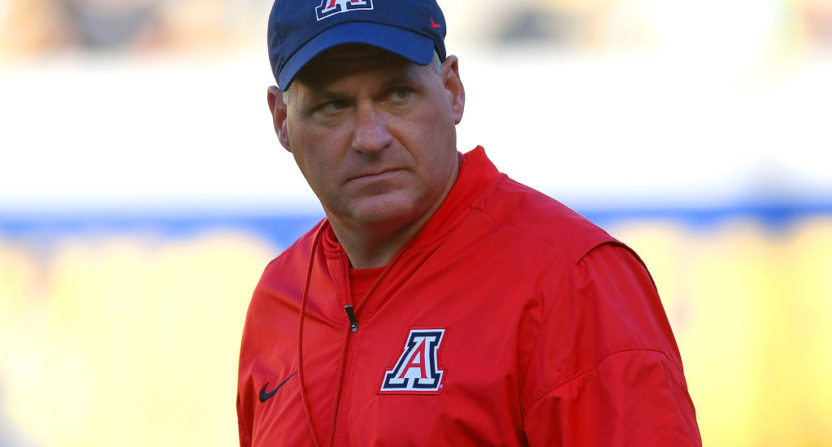 NCAA coaches complaining about kickoff times is a time-honored tradition, one that’s been especially prominent this year thanks to Washington head coach Chris Petersen and other Pac-12 coaches like Utah’s Kyle Wittingham and Stanford’s David Shaw making some comments critical of late kickoffs.

Arizona Wildcats’ head coach Rich Rodriguez has now added his voice to that tide, and Zack Rosenblatt of the Arizona Daily Star describes how Rodriguez weighed in on the matter at his press conference Monday:

“Everybody complains about the late-night game, but especially this year when you’re getting back at 3 or 4 in the morning and who knows what it’s going to be,” Rodriguez said, then went onto to imply how Arizona’s schedule should be considered.

“It’s, ‘OK, Arizona has not played one single day game this year. Can we do what we can to put them in the afternoon slot?’ TV will still dictate it, but I think you gotta ask the question.”

Rodriguez is more reasonable here than many coaches who have brought this up, and at least he realizes how important TV is to the college football equation, unlike many. (This is also one of the less-terrible uses of “gotta ask the question.”) His point about not constantly putting one team in late slots has some merit, too. And he does at least note that there’s some added exposure from games on ESPN, as opposed to their early slate of games on the Pac-12 Networks that led to CBSSN not even being able to discuss Arizona QB Khalil Tate.

But Rodriguez also argues that an earlier start for in-attendance fans might outweigh the TV benefits:

“The exposure is nice,” Rodriguez said. “But I’m also mindful of the fans. … From a fan’s standpoint, I think a little earlier than that is more enjoyable.

Again, Rodriguez isn’t necessarily wrong here, but it’s unlikely these complaints are going to lead to much. The reality of the current NCAA system and its giant TV contracts mean TV is going to dictate start times, and that’s going to be about what’s best for broadcasters rather than what’s best for in-person fans or coaches and athletes. And it’s unlikely they’re going to change just because of complaints. Also, there are advantages for programs like Arizona in later-night games as well as disadvantages; those games are probably being watched by many more people if they’re up against a weaker slate than if they’re going head-to-head with more prominent games, and that’s the extra exposure Rodriguez mentions. Does that outweigh the negatives? Not necessarily, but it’s worth discussing that this isn’t all bad.

It should be noted that ESPN isn’t even mostly to blame here, either; five of the Wildcats’ nine games have been on the Pac-12 Networks (with one on FS1 and three on ESPN networks), so perhaps Rodriguez’s complaints should be directed at officials there. In any case, Rodriguez isn’t wrong to note that there are issues with this, but it seems unlikely his comments will change anything. Hopefully they won’t lead to full-on ESPN retaliation of the likes Petersen got, though.