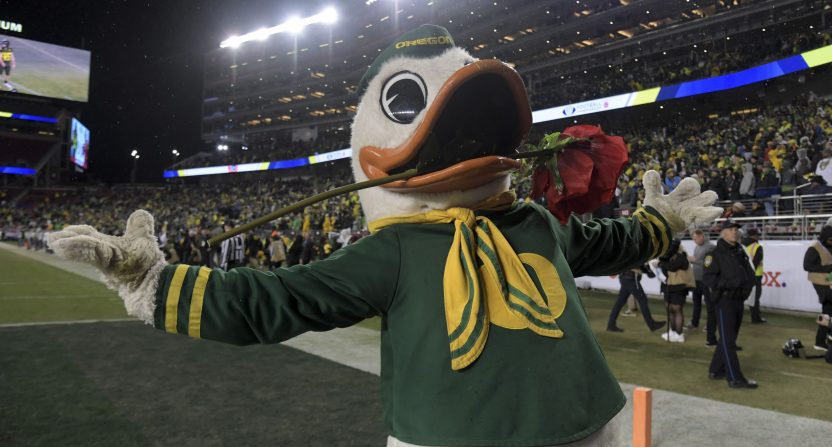 The Oregon Duck’s win over the Utah Utes on Friday night might have cost the Pac-12 a chance at having a team in the College Football Playoff, but at least a lot of people watched it happen.

ABC’s telecast of the Pac-12 Championship game between Oregon and Utah was the Pac-12’s most-watched championship contest since 2014 as well as the second-best audience ever in the nine-year history of the game. The broadcast garnered an average of 5,856,000 viewers, which is up 44 percent from last year’s Pac-12 Championship game between Washington and Utah. Audiences peaked in the 9:00 – 9:30 window, garnering 8.28 million viewers before tapering off as the night went on.

It didn’t hurt that the game had College Football Playoff implications. Had Utah won the game, they would have been in a position to take a spot in the CFP. It had been three years since the last time the Pac-12 had a realistic chance to put a team in the CFP, increasing interest. Not to mention many East Coast college football fans wanted a chance to see Utah in action, given the limited access they had during the season.

This was the first time the game aired on ABC. It had previously aired on Fox or on ESPN. ABC has an estimated 37 million additional homes versus ESPN, but Fox aired the game last year (and in 2016) and is in similar numbers of homes to ABC, so this isn’t all about that advantage.

The 2014 game between Oregon and Arizona was a match-up of two top-ten teams. Oregon’s 51-14 win propelled them into the College Football Playoff. The game, which was broadcast on Fox, drew a 3.7 final rating and 6.0 million viewers.

Correction: This post initially indicated this was the game’s first time on network TV. It was the first time it aired on ABC, but it had previously aired on Fox in the years Fox had rights to the game.