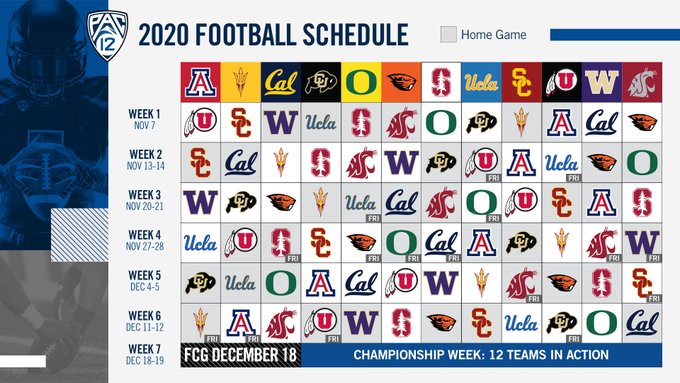 You’ve heard people talk about “Pac-12 After Dark,” but are you ready for “Pac-12 Just After Dawn?”

The Pac-12 will begin it’s truncated 2020 college football season on November 7, much later than usual. But the time for the first game, Arizona State vs. USC in Los Angeles will be much earlier than usual. As in 9:00 in the morning.

Gus Johnson, Joel Klatt, and Jenny Taft will be calling the morning festivities, which is, as Fox notes, “the Pac-12’s first contest scheduled in the network’s featured time slot.”

The idea of morning kickoffs for the Pac-12 isn’t entirely coming out of left field. The league explored the idea with Fox last year, which could make sense as they attempt to gain more exposure to college football fans on the other side of the country who aren’t staying up for the late-night games that have become staples of the Pac-12 schedule. At the time, some conference coaches expressed excitement about the idea, while others like Stanford’s David Shaw were opposed.

“We’ve discussed it recently. That would be new and out of the box for our conference but I’ve tried to put everything on the table. There’s a lot of frustration from fans in certain markets to the late-night kicks,” commissioner Larry Scott told NBC Sports last year. “I’d like to see one or two games this season that are 12 noon (ET) kicks be Pac-12 games and see what markets might respond positively to that.”

The idea was ultimately tabled at the time, but the door was left open for certain schools to take part if it happened in the future. And now it will.

"To play under the brightest lights on the biggest stage" @USC_FB's Clay Helton and @ASUFootball's Herm Edwards join #BigNoonKickoff to discuss their Week 1 @pac12 game on FOX ? pic.twitter.com/hHmtVO2zOC

As for the rest of the schedule, the Pac-12 has set up a unique system that takes advantage of their divisional rivalries and builds towards a “Championship Week” in which all 12 teams will participate.

Each team will play five divisional games and one crossover game against a non-division opponent, with these six games being evenly distributed between home and away for each team.  The seventh and final week will feature all twelve teams in action highlighted by the Pac-12 Football Championship Game, presented by 76®, on December 18, which this year will take place in a home-hosted format.  The Pac-12 and partners Allegiant Stadium, the Raiders, Las Vegas Convention & Visitors Authority and MGM Resorts International previously agreed to commence hosting of the Championship Game at Allegiant Stadium in 2021 for its two-year run in Las Vegas in order to ensure a successful launch of the inaugural event.  Details surrounding matchups and television selections for games other than the Football Championship Game in Week 7 will be determined in the near future.

Along with the 9:00 a.m. season-opener on Nov. 7, additional Pac-12 game broadcasts announced include Utah at UCLA on Friday, Nov. 13, on FS1, Stanford at Cal on Friday, Nov. 27, on Fox, Washington State at USC on Friday, Dec. 4, on FS1, and Utah at Colorado on Friday, Dec. 11, on FS1. Fox will also televise the Championship game on Friday, December 18. Per the conference release, every other game through the first six weeks of the season will be televised by ABC, ESPN, ESPN2, or ESPNU.

“The schedule announced today is highlighted by exciting and tough matchups that will showcase the depth of our Conference and position our teams well for CFP consideration and postseason Bowl opportunities,” said Pac-12 Commissioner Larry Scott in the announcement. “Importantly, our return to football competition will continue to place the health and safety of our student-athletes and all those connected to Pac-12 football as the highest priority.”

For a while, it seemed as though there might not be any Pac-12 football season. And given current events, who knows just how much of it will end up being played as scheduled. But at least for now, Pac-12 football is officially back.