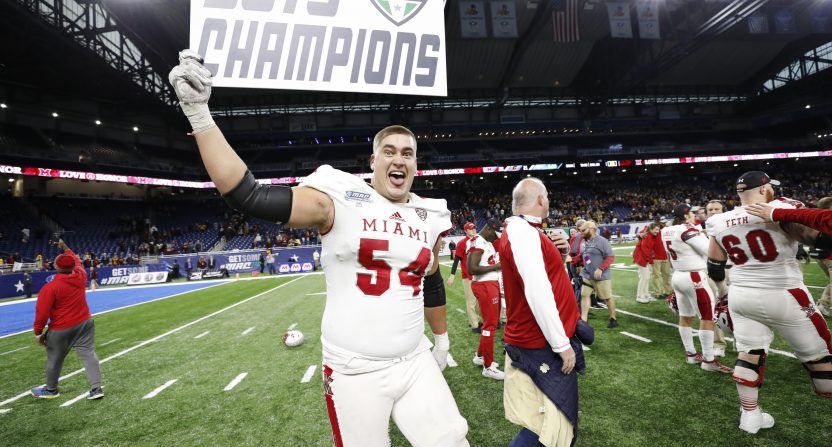 If you’re a football fan or a sports gambler of any kind, you know the feeling.

It’s a Tuesday or a Wednesday in October or November, you don’t want to watch early season NBA or NHL, and you can’t wait for the NFL to come back on Thursday.

“You’ve watched Monday Night Football and you’re like ‘oh my god, what’s next,’” said Dustin Fox, an ESPN analyst on many MAC telecasts and a Cleveland sports talk radio host.

And so you turn on one of ESPN’s numerous networks and dive into the wonderful, wacky world of Mid-American Conference football for your fix of some MACtion. You never know what you’re going to get with the MAC: shootouts in the 40s, games played in a blizzard, a monsoon, or in sub-freezing temperatures, where gale-force winds send punts backward and any team can win any game.

“They’re freakin’ watching it and betting their rent on it when they’ve got no clue what will happen,” Fox said. “Tons of points, tons of crazy shit happens. They make fun of it, but they love it.”

Matt Sussman founded the Hustle Belt site for SB Nation, covering everything MAC, in 2010, the same year Ty Linder began as the radio play-by-play voice for Kent State, one of the conference’s 12 teams. Linder thought that the conference started to gain more notice when teams like Northern Illinois, Toledo, and Bowling Green were beating Big Ten or power five schools on a yearly basis and fans got to see them on national television every week. Sussman said that Hustle Belt first got a lot of traffic from fans of big schools looking up their smaller non-conference opponents, but the conference itself hyped up and marketed the site well, bringing fans from those schools together on its platform.

“Here was one place we could all rue our good coaches leaving for other schools, or wonder why the best team in our league isn’t ranked in the top 25,” Sussman said. “And for all the other curious souls, they had a place to look up more on the teams.”

The MAC started midweek games in 1999, but MACtion only started to take off when ESPN began to more regularly broadcast its contests in the beginning of the 2010s, led by its monster 13-year contract extension with the network signed in 2014.

“You become a national story and in the national spotlight, which wouldn’t happen on a Saturday,” said Joel Godett, who’s been the radio voice of Ball State football since 2012. “MAC games are not always, not often, on national TV, but when you play midweek MACtion games, they’re on national TV for everyone to see.”

Fox began calling MAC games for ESPN in 2013, on the ESPN3 digital platform, with his first game being a September tilt between Central Michigan and New Hampshire. Living in the Cleveland/Akron/Canton area where a lot of the conference’s schools are based, Fox began getting more game assignments. He’s now been calling games regularly with Michael Reghi for some time now and considers himself an ambassador of sorts for the conference.

“Midweek MACtion has this huge cult following, and I think a lot of it stems from gambling, frankly,” Fox said.

If you’re a gambler or a football fan, the MAC and the Sun Belt are usually your only midweek options.

“ESPN is in every house and every sports bar and the MAC was willing to be that league that turned into a midweek league,” Sussman said. “It went from a novelty to regular thing because the games are usually very good, or at least competitive.”

Now MACtion enters the national conversation in October and November every year with regularity. Games trend on Twitter with #MACtion. Godett will drive into work on a Wednesday and hear Dan Patrick talk about how he watched Kent State-Bowling Green the night before. His friends will bring games up in casual conversations. These are things that wouldn’t happen if MAC games were played on Fridays and Saturdays like every other conference.

During the season, people will ask Fox on social media for his best MAC pick that week. And if it’s not a game he’s calling, he’ll give them some betting advice.

“I have a pretty good feel for what’s going on in the conference,” he said, “and I’ll give them some love so they get their fix of degeneracy during the week.”

“It’s pretty obvious that they’re coming from people that had no interest in the game other than monetary,” he said.

But the problem with gambling MAC games is that there’s so much volatility with the teams and the weather. Asked if he could sum up MACtion in one word, Sussman responded with “chaos.”

“Nowadays I think it’s ‘excitement’ or ‘high scoring’ and that’s true,” he said. “But the MAC never had a perfect team. They had great teams and sometimes perfect records but they would often look ordinary against another ordinary MAC team. MACtion is chaos and everyone loves unpredictability.”

Sussman’s favorite all-time MACtion game was a throwback from 2006, when Miami (Ohio) beat Bowling Green 9-7 in the mud and allowed Scott Van Pelt to deliver an amazing SportsCenter highlight that still stands the test of time.

“Once that sun goes down, if you look across the footprint of the MAC, no matter where you are, from Northern Illinois to Buffalo, you’re fighting weather that time of year,” Linder said. “We’ve been through games where we experience all four seasons in one day and night.”

He and Kent State once had to cancel a November 2014 game against Buffalo because of blizzards in upstate New York and the team’s equipment couldn’t unable make the trip.

“We were trapped at a hotel for almost a week up there,” Linder said. “We’ve seen gale force winds at times where we’re punting backwards.”

On the other end of the scoring spectrum, Fox’s favorite MAC game happened on a Saturday in 2017, but it was the classic 71-68, seven-overtime win for Western Michigan over Buffalo he called that at the time broke the record for most total points in an FBS game. The game wouldn’t have been on ESPNU if not for the threat of a hurricane pushing up the start of a Tulane game against Tulsa.

“Nobody had a clue that it was gonna be this awesome game,” Fox said. “And people were tweeting as it was going into the 5th overtime, and six and seven. It was just nuts. Bananas.”

For announcers like Linder, just going to usually empty stadiums to call games on a Tuesday or a Wednesday is weird, leaving broadcasters and players alike to often forget what day of the week it is, a more common issue here in 2020. But more on that in a bit.

“I never really got used to it,” Linder said. “It always seems strange, especially as the season goes on and it starts to get darker earlier and the lights pop on at 3 p.m. and then you’re out there.”

Things get even more bizarre every year on the first Tuesday in November, and both Godett and Linder have experienced calling games on the night of a presidential election.

“There’s a weird, different vibe to doing that,” Godett said.

On election night in 2012, Ball State knocked off a ranked Toledo team on the road after a Jahwan Edwards touchdown with less than two minutes left.

“As he crossed the goal line,” Godett said, “within seconds my phone starts buzzing with alerts that Barack Obama had just been re-elected. It was a very odd, surreal moment.”

“We had the election map open in our booth,” he said. “You’ve got your eyes in two different directions. There was a lot going on that night, plus it was a wild game.”

That same night, Linder called Kent State’s 37-21 loss to Western Michigan and saw more people in the press box watching TV news coverage than the actual game itself. But this year, there won’t be that issue because MACtion and all MAC sports have been postponed until the spring.

The Sun Belt is still scheduled to have midweek games, but things won’t nearly be the same without our regular dose of wild, wacky MACtion.

“I think everyone’s gonna miss it,” Fox said, hoping he’ll get to call games in the spring.

Godett will miss that November period this fall when college football and basketball are played at the same time and he’s calling games in multiple sports per week, what he calls crossover season. Linder will miss the Tuesday and Wednesday primetime matchups that have now become a tradition in the conference.

“Once those October and November midweek nights roll around and there’s still no games on TV,” Linder said, “it’s gonna be very strange. Then again, it’s been a really strange six months.”

As college football officially kicks off for most of the country’s conferences this weekend, positive coronavirus tests and other factors may require some flexibility in terms of when games are played, if they are at all. Which means, Sussman said, that midweek games could end up being necessary, copying the plan the MAC has implemented over the years to brilliant perfection.

“The other conferences are going to follow suit,” he said, “they just don’t know it yet.”