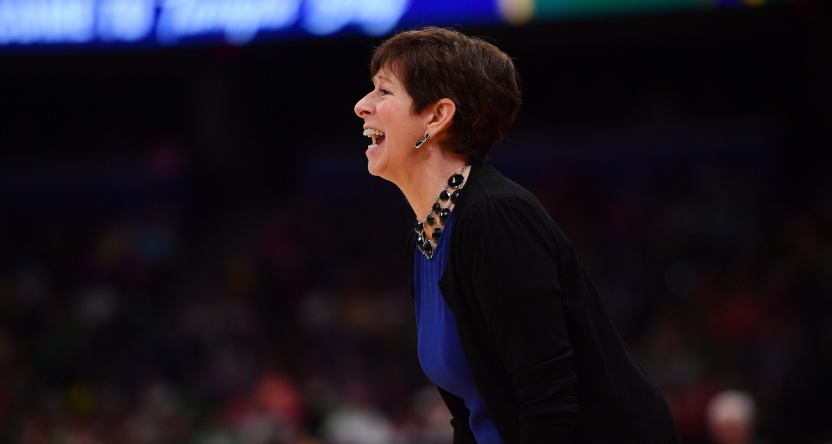 College coaches and commissioners complaining about media influence on their sports, and ESPN’s influence in particular, is a long-established tradition. However, it’s a little more interesting than usual to have some of those criticisms coming from inside the ESPN building. That’s the case with what former Notre Dame women’s basketball coach Muffet McGraw (seen above coaching against Baylor in the 2019 NCAA title game), now an ACC Network (owned and operated by ESPN) analyst, said to Jessica Smetana and Kate Fagan on their Meadowlark Media (founded by ex-ESPNers Dan Le Batard and John Skipper) podcast Wednesday. Here’s a writeup of that from Ryan Gaydos at FoxNews.com:

“UConn has done great things, and they’ve won way more than anybody else, except Tennessee. What they’ve done has been amazing. I think people measure their team by them. When we joined the Big East, we were like, ‘We want to get to where they are. That’s what we want to be. We’re trying to emulate them,’” McGraw said.

…”I think there’s an incredible bias with their players. If you recruit a kid and she’s ranked 35th in the country and she signs with UConn, the next time the poll comes out, she’s 18th.”

Part of what’s interesting about this is that the ESPN-Connecticut discussion is not totally about regular-season game rights. Normally, with a lot of these conversations in college sports, the main thrust is about networks trying to promote the conferences they have exclusive rights to. But, as Mechelle Vopel notes in a (quite evenhanded) ESPN.com writeup of this, ESPN doesn’t actually have most of UConn’s games; the Huskies will have six games on ESPN networks this season (with four already played and two still to come), but most of their games are on SNY (a big part of why they left the AAC, with complaints about the shift to ESPN+ with that league) and/or Fox (which has the official Big East rights, including to the conference tournament). Meanwhile, Notre Dame’s current schedule lists six remaining games on the ESPN-owned ACC Network proper, one on ESPN or ACCN, and two on ACCN digital streams.

So the idea of ESPN boosting UConn isn’t really about their in-season games. And it’s also not really about ESPN’s headquarters being in Connecticut; yes, that’s true, but ESPN has had very little motivation to cover anything in Connecticut more than it deserves since their initial decision to go satellite rather than cable. There could perhaps be an argument here be about the Huskies’ postseason games (ESPN has the NCAA women’s tournament rights), and about studio show discussion (it wouldn’t be surprising at all to find that ESPN provides more coverage of UConn on studio shows than any other women’s basketball team, as ESPN studio shows are quite often focused on the broadest possible topics, and UConn women’s basketball is seen by many as broader than the sport overall), and about online discussion (for similar reasons to the studio shows).

And none of those arguments should be written off altogether. There’s absolutely a possible case that ESPN has tried to promote UConn women’s basketball more than the rest of the sport, maybe especially as a way to promote the women’s NCAA tournament. And the recruiting claim in particular might be worthy of a deeper dive. It seems at least possible that ESPN’s digital properties do wind up overrating players who wind up with the Huskies. (And regardless of how provable or not these comments are, it’s very refreshing to hear a former coach employed as an ESPN analyst actually saying what they think.)

But these comments do stand in contrast to what we usually see about “ESPN bias,” where there’s more of an obvious incentive for the network to have that bias to favor the schools and conferences that they have rights deals with. In the case of Connecticut, any potential gain for ESPN is buried much further down, and there’s at least as good of an argument that they should instead favor schools like Notre Dame where they have more significant rights. That doesn’t wipe out McGraw’s criticisms, and there’s maybe something worth looking at there in terms of how often ESPN talks about UConn players versus top players at other schools, but there’s at least some reason to view these claims skeptically. (And the strongest points that McGraw makes, about UConn coach Geno Auriemma having outsized influence on the US women’s Olympic national teams and favoring Huskies’ players with those selections, don’t actually have much to do with ESPN; that would be about the USOC and USA Basketball, and if there was any broadcaster involved, it would be Olympics rightsholder NBC.)

Maybe the most interesting thing here is how ESPN was criticized by someone who works for them. That does happen occasionally, but it’s relatively rare. Sometimes, the internal criticism is just shrugged off, but sometimes, it leads to an actual corporate response. We’ll see if anything happens there.

[Off The Looking Glass/Fox/ESPN; photo from Jasen Vinlove/USA Today Sports]