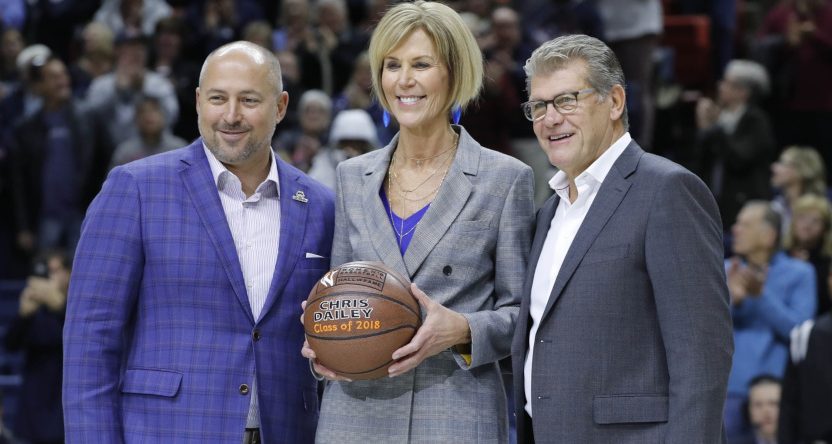 From the outside, the American Athletic Conference’s new rights deal with ESPN (taking effect in 2020-21) looked pretty positive for the conference’s schools. They managed to get $1 billion over 12 years, boosting per-school payouts from an estimated $2.16 million per year to $6.94 million per year, and they did so without a grant of rights that locks them into the conference. They also wound up with more games broadcast, both on linear television and on ESPN+. But one of those schools, the University of Connecticut, seems quite unhappy about it. Here’s more on that from former AA writer Alex Putterman, now with The Hartford Courant:

In a statement released Wednesday evening, UConn athletic director David Benedict said he worried about moving Huskies games off linear TV, especially if that meant sacrificing the school’s relationship with SNY, which broadcasts more than a dozen UConn women’s basketball games a year.

“We are disappointed that there will be a reduction in linear TV exposure for our men’s and women’s basketball programs, including but not limited to the potential loss of our successful partnership with SNY,” Benedict said.

However, despite those comments from Benedict (seen at left above in November with Huskies’ women’s basketball associate head coach Chris Dailey and head coach Geno Auriemma) it’s far from clear that there will actually be “a reduction in linear TV exposure” for UConn’s men’s and women’s basketball programs. The overall numbers of AAC games broadcast on ESPN’s linear networks are actually going to rise from what they are under the current deal, as per David Borges of The New Haven Register:

The league will have a minimum of 40 regular-season football games per season on ABC, ESPN, ESPN2 and ESPNU, up from its current minimum of 26. At least 20 of those games will run across ABC, ESPN and ESPN2. The AAC championship game will be televised each year on ABC or ESPN.

In men’s basketball, a minimum of 65 regular-season games per season will be broadcast on ESPN, ESPN2 and ESPNU. The minimum for this past season was 32. At least 25 of those games will be on ESPN or ESPN2, and the conference tournament will continue to be covered by ESPN, ESPN2 and ESPNU, with the championship game on ESPN.

And in women’s basketball, a minimum of 13 regular-season games per season will be on the premier networks, with a minimum of five on ESPN and ESPN2.

So, on the ESPN side at least, the AAC’s linear television content is actually rising significantly. Now, that’s conference-wide rather than UConn-specific. But as per conference commissioner Mike Aresco and ESPN executive vice president (programming and scheduling) Burke Magnus,  while it’s not yet decided what games will be where (appropriate, considering that this deal doesn’t kick in until the 2020-21 season),”games with greater impact on conference championship races are more likely to appear on linear television.”

That bodes well for featuring the women’s basketball Huskies given their typical success and prominence (11 NCAA Tournament titles, including four straight from 2013-16, and a current run of 11 straight Final Four appearances). If the men’s basketball program is able to return to prominence as well (they won NCAA Tournament titles in 2011 and 2014, but haven’t made the tournament since 2016, and went 16-17 this year, 6-12 in conference play), they could also get significant play on ESPN’s linear channels. The football team that went 1-11 this year (0-8 in conference) and was ranked 130th out of 130 FBS teams by Athlon Sports? Yeah, they’re probably headed for ESPN+, barring a significant improvement.

But what about SNY? Well, most of the UConn complaints so far appear centered around losing games on SNY. Even Huskies’ women’s basketball coach Geno Auriemma complained about that Thursday:

But that doesn’t sound like a foregone conclusion, at least according to Magnus:

ESPN executive Burke Magnus said the new agreement does not necessarily mean the end of UConn games on SNY. He said ESPN will soon meet with both SNY and CBS Sports Net, which also sub-licenses select AAC games, to discuss details.

“I’m certain we’ll sit down with both of those guys and see where they are in terms of continuing those kinds of relationships,” Magnus said. “And we have the time to do it.”

Does that mean things will continue the way they’ve been for UConn on SNY? Not necessarily. ESPN and SNY would have to come to a deal, and SNY senior vice president of programming Gary Morgenstern didn’t seem too confident there earlier this week. But it does seem like there’s incentive on both sides to make that happen; UConn officials obviously want that, the AAC is probably fine with it, and Morgenstern said “It’s such a great relationship. I think it’s been really good for the university and we know it’s been really good for SNY.” And the amount of emphasis UConn officials are putting on this makes it seem possible this will happen. However, some of the criticisms of this deal feel a bit disingenuous, such as the ones from UConn president Susan Herbst (to Mike Anthony of the Courant) Thursday:

“We at UConn have been a dedicated and enthusiastic charter member of the AAC,” Herbst wrote in an email. “The level of play in the conference has been outstanding, and our university colleagues in the conference are a pleasure to work with. That said, I am deeply concerned about potential exposure for UConn men’s and women’s basketball.”

“It’s not about technology,” Herbst said. “Our fan base is of course sophisticated in the ways of digital media. But exposure on ‘linear’ (traditional, cable) television is vitally important to us because many Husky fans gather to watch UConn basketball as a social event — when traveling, in restaurants or bars, or in the living room with family and friends. Right now, wherever I am, I can tune in easily and see our student-athletes in action. We do not want our amazing Husky fan lifestyle disrupted. Period.”

The legitimate complaint there is about bars and restaurants, as streaming is not always an option there . Although, you’d think that if streaming content becomes popular enough, sports bars at least will figure out ways to do this, and it’s quite conceivable that Connecticut-area bars will feature UConn games regardless of if they’re on streaming or linear.  And as per the rest of it, it really won’t be much harder to “watch UConn basketball as a social event” “when traveling” or “in the living room with family and friends” if those games are on ESPN+

. Streaming doesn’t just equal phones or tablets; ESPN+ games can be seen on TVs with any number of cheap streaming plugins, like Roku or Amazon Fire devices, to say nothing of smart TVs that have app compatibility. And all of those solutions those are quite usable “in the living room with family and friends,” and many of those devices are quite portable for use “when traveling.” So, if the UConn fanbase is really “sophisticated in the ways of digital media,” they shouldn’t have too many problems there.

The real reason to criticize games moving to services like ESPN+ isn’t about the technology, it’s about the cost. ESPN+ is an extra $4.99 a month (at the moment; that fee could rise down the road as they spend more and more on programming), which adds up. And it’s not like fans of a school like UConn can choose just to buy ESPN+; split linear and streaming deals like this require both a pay TV package and an ESPN+ subscription. And that’s a fair criticism, and one that provides incentive to try and keep games on linear TV. That should be emphasized more, not complaints that people won’t be able to watch “in the living room with family and friends.”

But at the moment, all of these complaints seem like a bit of a tempest in a teapot. There’s still another full season before this deal kicks in, and there’s zero proof right now that the deal is going to lead to “a reduction in linear TV exposure” for UConn’s basketball teams. On the conference level, it’s going to lead to more linear TV exposure for the AAC, at least when it comes to ESPN channels. And a reasonable amount of that may wind up involving the Huskies.

Beyond that, all these officials are talking as if they’re doomed to not have games on SNY, but that isn’t concluded yet either, with both ESPN and SNY interested in at least having discussions there. Maybe these complaints from UConn officials will help provide further incentive to make a SNY deal, and maybe that will work out for everyone. But for the moment, this seems like a lot of outrage over “a reduction in linear TV exposure” that isn’t necessarily going to happen.