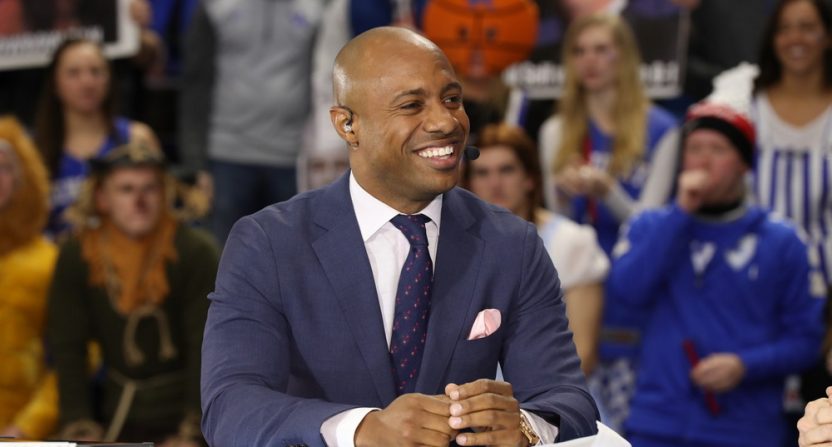 From this writer’s perspective, one of the worst developments in the last several years of sports media has been the proliferation of the social media practice of taking a small quote, often out of context, and throwing it on a “graphic” with an unrelated photo of the person who said it. That often includes not even providing a link to where it was said (much less a link to an article exploring how and why it was said), or an attribution for the person who initially relayed the quote. And it also often adds extremely little information, context, or analysis to the quote (perhaps, if you’re lucky, an “eyes” or “fire” emoji).

This is a widespread practice by countless sports media outlets. But it’s become particularly noteworthy at ESPN in the past two years, with the January 2020 hire of Omar Raja from House of Highlights/Bleacher Report to “initiate strategy for the network’s social programming” seemingly a factor there (he’s currently titled as “Commentator, Digital & Social Content“); a lot of this feels like what those brands used to do under Raja and/or still do. And, funnily enough, this approach is now repeatedly getting called out by people associated with ESPN. In September, Tom Brady (who has the “Man In The Arena” original series with the network) ripped ESPN for an @SportsCenter tweet taking a quote from his SiriusXM podcast without a link.

And on Wednesday, actual ESPN personality Jay Williams (co-host of the 6-10 a.m. ET ESPN Radio morning show Keyshawn, JWill & Max, with Keyshawn Johnson and Max Kellerman, plus a regular commentator on other programs like First Take and Get Up) blasted @ESPNCFB for using not even a full sentence of his from the radio show, out of context and with no link to the show clip, just a link to their Twitter account. And after that, ESPNCFB deleted the tweet. Here’s a screengrab of it, then a response from Williams (seen above in 2017 on ESPN’s college basketball College GameDay show): 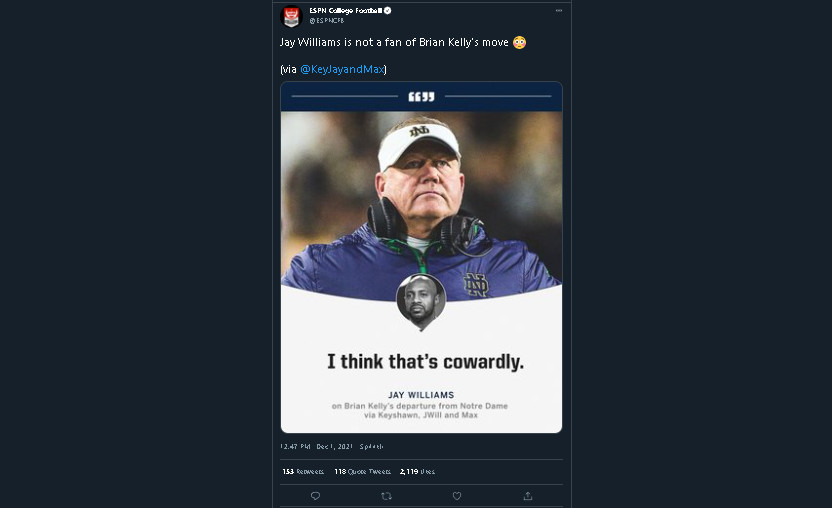 Damn @ESPNCFB .. don’t cut my quote short & make it sound this way. I have no problem with him leaving for more money.. this is what I said though: “I think that’s cowardly to not finish the season with your team especially if they make the CFP. You owe the young men that”. https://t.co/o2G3AtjWd5

Think about everything involved here for a moment. Someone at ESPN was paid to tweet out Jay Williams’ radio take on Brian Kelly. They did so by not even taking a full sentence from him, but taking the first four words of a sentence. They then added a photo of Kelly at Notre Dame, a small photo of Williams, and the four words there. And then, in their actual tweet, they put out 10 words: “Jay Williams is not a fan of Brian Kelly’s move.” They then added a “flushed face emoji,” and then a “Via @KeyJayandMax,” but not a link to the clip, or to the show page, or to anything. And they did so in such an out-of-context way that Williams, the person who supposedly should have been pleased with this promotion of his opinion, criticized it, leading to them deleting the initial tweet.

Look, this isn’t a wholehearted defense of Williams. His initial point wasn’t that great even in its full form. Leaving before bowl games or playoff games is incredibly common in college football, and in many cases, it’s probably better; that gives someone else a chance to step up in an interim role, and it avoids the awkwardness and potential conflicts of interest around a coach who’s already made it clear he won’t be there afterwards. (And waiting to announce coaching hires until after playoff games would be even worse; that would mess up a ton of recruiting commitments, and it would mean that half the playoff discussion would be about where coaches were going next, not the on-field games.)

And this is far from the first time Williams’ over-the-top takes have led to issues. See his Kevin Durant feud, or his “I was hacked” claim instead of an apology when he got a basic Celtics’ coaching fact wrong, or his past inconsistency on tripping, or any number of other things. But in this case, he has a point about the exceptionally poor ESPN social media coverage of his on-air comments. And it’s very funny to hear the criticism coming from inside the house, and to see that leading to a deleted tweet.