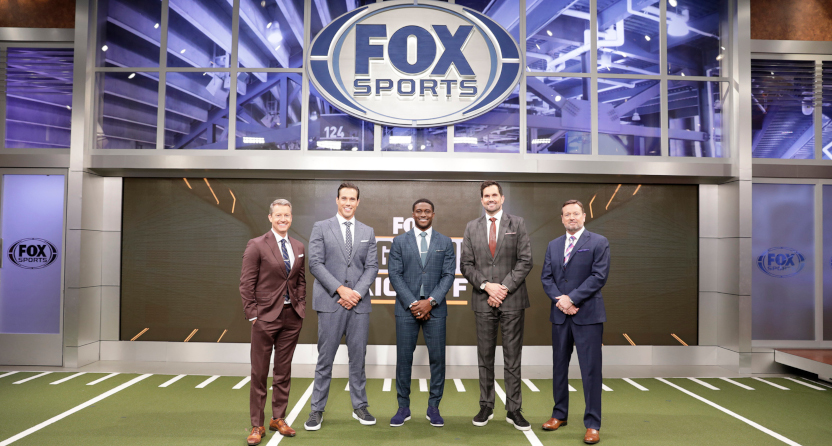 Both ESPN and Fox rolled out college football announcements Thursday, and there’s a lot to unpack in both.  To start with, let’s look at the real early part of the season, Week 0 and Week 1. Week 0 has been a growing focus in recent years, albeit not last year thanks to pandemic cancellations, but it looks to be back in more normal form this year, with ESPN featuring UCLA-Hawaii on Saturday, August 28 and Fox showcasing Nebraska-Illinois (on the broadcast Fox network) that day. (There are three other games that day as well, with Southern Utah-San Jose State and UConn-Fresno State both on CBSSN and UTEP-New Mexico State still set to be announced). And Week 1 looks to be very strong, especially with Fox starting with an Ohio State-Minnesota game in primetime Thursday on their broadcast network and sending their Big Noon Kickoff cast (pictured above, now minus Urban Meyer and plus Bob Stoops) to that, then to Madison ahead of Penn State-Wisconsin’s Big Noon Saturday (their noon ET kickoff game) appearance two days later. Here’s more on that particular plan from Fox:

The 2021 FOX College Football schedule is book-ended with some of the biggest Big Ten games of the year, kicking off Thursday, Sept. 2, with Ohio State at Minnesota at 8:00 PM ET on FOX, followed two days later by Penn State at Wisconsin on Saturday, Sept. 4, at 12:00 PM ET. The cast of BIG NOON KICKOFF hits the road for on-site shows in both Minneapolis and Madison.

Other early Big Noon Saturday games include Oregon-Ohio State (Sept. 11), Nebraska-Oklahoma (Sept. 18, already complained about by Oklahoma), and Notre Dame-Wisconsin (Sept. 25). Meanwhile, as for ESPN, they have a whole lot of neutral-site games in Week 1, including two on Saturday, Sept. 5 that are run by ESPN Events:

ESPN Events’ portfolio of premier college football events will be on display opening week with the 2021 Texas Kickoff and inaugural Vegas Kickoff Classic, both primed for primetime. Longtime Lone Star State rivals Texas Tech and Houston will match up in the Texas Kickoff at 7 p.m. on ESPN. Allegiant Stadium in Las Vegas, the home of the Raiders, will host Arizona vs. BYU following the action from Houston at 10:30 p.m. on ESPN.

And they have more neutral-site games in Week 1 beyond that:

The official Week 1 college football slate will begin with the first edition of the Montgomery Kickoff in Montgomery, Ala. on Wednesday, Sept. 1. ESPN will televise the neutral site showdown between UAB and Jacksonville State at 7:30 p.m.

In addition to the Montgomery Kickoff, the Cramton Bowl in Montgomery welcomes another inaugural neutral site showdown within the ESPN Events collection. Previously announced in February, Tuskegee University and Fort Valley State will play in the first Red Tails Classic on Sunday, Sept. 5 at 7 p.m. on ESPNU. ESPN Events launched the event to honor the Tuskegee Airmen, the legendary Black military aviators who served in World War II.

In addition to Saturday’s Crimson Tide-Hurricanes game, Mercedes-Benz Stadium in Atlanta will also play host to a second Chick-fil-A Kickoff showdown with Louisville vs. Ole Miss on Labor Day Monday (Sept. 6) at 8 p.m. on ESPN.

There’s a lot more in those releases, including an expanded presence for over-the-top streaming service ESPN+ this season. Select SEC games will now be available there (however, those will also be on authenticate-with-cable streaming app SEC Network+, so as with Euro 2020, it’s something that works for both cable subscribers who don’t subscribe to ESPN+ and those who only subscribe to ESPN+), while a “record” number of Big 12 games will be there (at least 11, up to 15), and the American Athletic Conference will have a lot of games (around 25) there for the second-straight season. The service will also carry Conference USA, MAC and Sun Belt games, and expects to air more than 150 FBS games. So ESPN+ will have more college football content than in the past this fall.

Meanwhile, back on the Fox front, they’re also excited about their Thanksgiving slate and their Ohio State-Michigan “Big Game.” Here’s more from that release on those fronts:

…The regular season concludes Thanksgiving weekend with the most heated rivalry in all of sports as Michigan hosts Ohio State Saturday, Nov. 27, at 12:00 PM ET on FOX.

While there’s a lot for college football fans to be excited about in a season that’s looking more normal compared to 2020’s pandemic-altered schedule, there are also undoubtedly going to be some complaints. One thing that’s sure to raise ire in the days ahead is that the College Football Playoff semifinals will again take place on New Year’s Eve on ESPN, which also happens to be a Friday night. While the New Year’s Day games have drawn better, and while 2016 saw a decision to move future weekday New Year’s Eve semifinal games to New Year’s Day or the next-closest Saturday, it was noted even then that 2021 would mark the exception where those games would still happen on New Year’s Eve. And that’s still likely to be pretty unpopular. But that’s a long way ahead, and there are plenty of other college football broadcasts to watch before then.