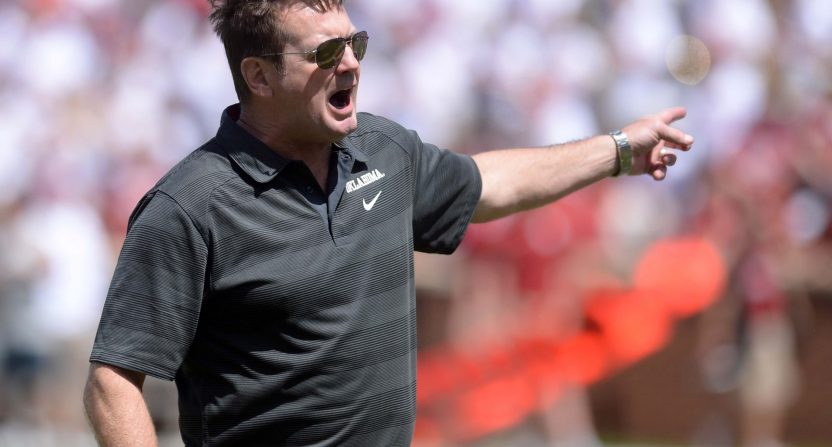 According to a New York Post report, Fox Sports has added Bob Stoops to replace the outgoing Urban Meyer on Big Noon Kickoff.

When Meyer left television for the Jaguars job, it created a very visible vacancy on the ascendant college football pregame show, albeit one that would be difficult to fill. Meyer was revelatory as an analyst, demonstrating the ability to effectively break down concepts and be both engaging and informative.

That’s not an easy role to fill, though with Stoops, Fox can certainly point to a similarly decorated college coaching pedigree, along with a fairly recent departure from the game.

From Andrew Marchand, who reported the news for the Post:

After Meyer took the Jacksonville Jaguars coaching job in January, Fox Sports’ immediately zeroed in on Stoops. Meyer – who received near universal praise during his two years on Big Noon – spoke to Stoops about what the job entailed, a source said.

The role Stoops will fill is an important one for the show, as Stoops will be the non-player voice on set. Rob Stone, Matt Leinart, Brady Quinn, and Reggie Bush remain in their roles, and Stoops will be called on for his coaching perspective. Stoops also coached until he left Oklahoma in 2017, theoretically giving him more of a feel for the modern game. (Stoops most recently coached in the XFL, which shut down last spring amidst the pandemic.)

Whether Stoops can match Meyer’s broadcasting acumen remains to be seen. He does bring a very recognizable name and a Hall of Fame coaching pedigree. Fox will likely resume trying to push for College GameDay’s crown this fall, and while losing Meyer is a blow in that regard, it’s hard to think of a coach with more name value they could have added.

That definitely counts for something, but the real key will be if Stoops can translate his knowledge and experience into useful information for viewers. For everyone’s sake (especially those of us who have to watch these shows every week), let’s hope he can.