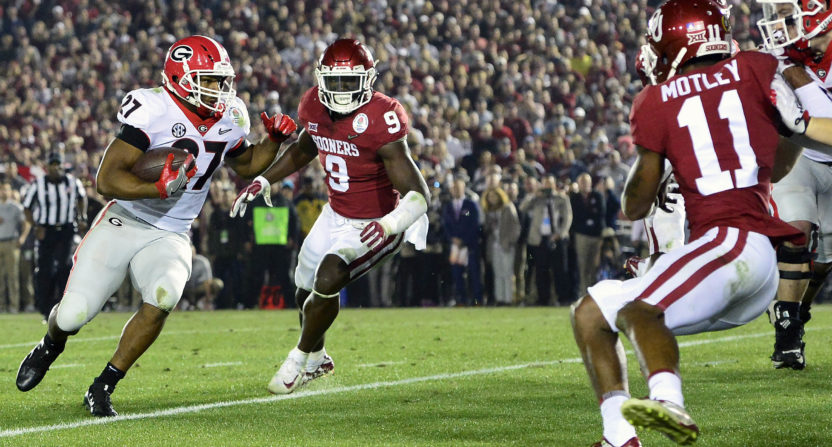 After much hand-wringing over the College Football Playoff semifinals on New Year’s Eve, college football fans got what they wanted this year: the games’ return New Year’s Day. And based on ESPN’s ratings for Monday’s two semifinals, it seems fans were quite happy about the change.

The final viewership numbers released by ESPN were even stronger – the Rose Bowl averaged 26.83 million viewers between ESPN and ESPN2, good for the fifth-most watched cable program ever. It was up 39% from last year’s game, and a whopping 71% from 2015. The Sugar Bowl finished with an average of 21.12 million viewers on ESPN and ESPN2, up 10% from last year and 13% from 2015.

Rather than the teams involved or the entertainment value of the games, the schedule seems to have been the most important factor in that surge in ratings. In each of the previous two years, the CFP semifinals aired on New Year’s Eve, when much of America is occupied with champagne-soaked countdowns. This year’s games aired on New Year’s Day, a more traditional date for college football, and were therefore destined for better ratings regardless of fan interest or quality of games. The fact that, as it turned out, Georgia and Oklahoma produced a double-overtime classic was a welcome bonus.

The New Year’s Eve vs. New Year’s Day conundrum has haunted ESPN and the College Football Playoff for several years now. The CFP originally promised to “change the paradigm of New Year’s Eve,” but soon abandoned that initiative amid poor ratings and pressure from ESPN. In 2016, the CFP announced it would play its semifinals on December 31 only when that night falls on a weekend, ensuring we won’t see another New Year’s Eve semifinal until 2021-22, with the games over the next three years airing on December 29, December 28, and January 1, respectively.

If there was any doubt that the CFP’s decision to avoid New Year’s Eve was indeed the right one, ESPN’s big ratings Monday night seem to eliminate it.