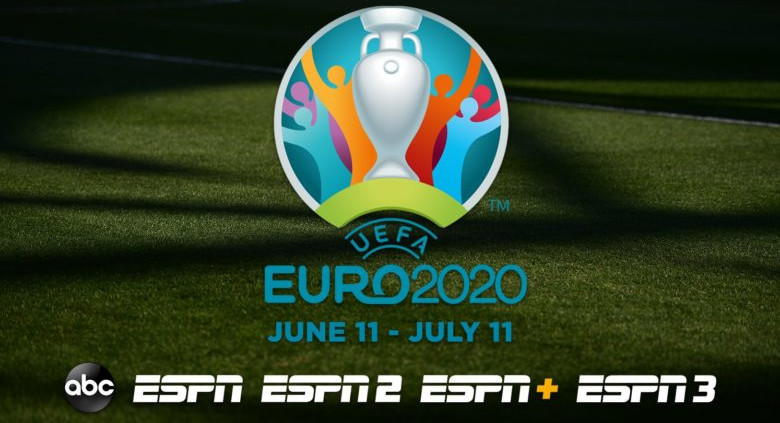 The UEFA European Football Championship 2020 (yes, they didn’t change the name despite the year postponement following the COVID-19 pandemic’s beginnings last year) is set to run from June 11-July 11 in Italy, and ESPN will be televising it (as part of a large UEFA deal they struck in 2016). ESPN released their coverage plans Monday, and an interesting element is the breakdown of where games will air; all 51 will air on TV (five on ABC, 40 on ESPN, six on ESPN2), but all 51 will also air on ESPN+. So that avoids the “paywall!” complaints we often see about games airing only on streaming services, and it means that both those who have the ability to pass the traditional cable paywall and those who have the ability to pass the ESPN+ paywall will be able to see every game. (And for those who only have broadcast TV, there will still be five games there.) Here’s more from the release:

ESPN will televise 40 UEFA EURO 2020 matches, ESPN2 will air six, and ABC will broadcast five matches (two group stage matches, two round of 16, and one quarterfinal) – the first UEFA European Football Championship matches on network television since 2008. The matches will stream live on both the ESPN and ABC apps. Additionally, matches on ABC will also simulcast on ESPN3.

ESPN+ will livestream all 51 matches via a second-screen experience with three different feeds – an aerial cam (tactical cam) and two additional feeds that provide fans with a combination of player and manager Iso-Cams, as well as audio from ESPN’s match commentators.

…In addition to the second-screen experience for all tournament matches, ESPN+ will simulcast ESPN’s presentation of the UEFA EURO 2020 semifinals and final matches.

Putting games both on linear and on a standalone streaming service (albeit in alternate feed form) is notable, as ESPN’s rights approach to many properties so far has often emphasized either linear TV exclusives or ESPN+ exclusives. For example, when they struck an additional rights deal with the Big 12 in 2019, the new content was mostly divided into linear and ESPN+ pots (including more than 800 games annually across Big 12 sports on ESPN+). And while that approach can be great for those who have both a linear ESPN subscription (through cable, satellite or a virtual MVPD service like Sling or fuboTV) and an ESPN+ subscription, it’s annoying for those who don’t have one or the other. The Big 12 football games on ESPN+ in particular saw a lot of pushback from fans of those teams who have an ESPN subscription but not ESPN+, and streaming-only games can be a particularly hard sell in some areas where high-speed internet penetration is still limited.

The alternate feed approach here is also notable, as that gives even those who have ESPN perhaps a reason to watch ESPN+ coverage instead. And unlike, say, the MLB on ESPN Star Wars Night, these alternate feeds are truly alternate for those who have both linear and streaming subscriptions; those who don’t want or need an aerial/tactical cam or manager/player isocams don’t have to bother with them, and those who do want that can check it out. Now, this does perhaps pose a problem for those who want a conventional TV feed but only have ESPN+, but “alternate feeds” are still much better than the “nothing” customers who only have ESPN+ have frequently been offered around events where ESPN has rights.

And it’s worth keeping in mind the history here. Yes, ESPN has shown some feeds of some big events on ESPN+, especially with NCAA or NFL Megacast alternate feeds. But in general, ESPN+ has been far from an ESPN replacement, and more of an ESPN supplement; it’s offered exclusive series, the 30 for 30 library and so on, and there’s certainly some value to that for some users, but many of its 13.8 million subscribers (at the end of fiscal Q2 2021) are only there because it’s almost free under the bundle of Disney+/Hulu/ESPN+. Putting actual whole-event rights on the service, even with most of those only involving alternate feeds, is a step towards claims like then-Disney CEO (now chairman) Bob Iger’s remarks in February 2018 around the ESPN+ launch that the service would eventually be the key interaction point between ESPN and consumers:

“Over time, our intention would be for that app to be the app that people experience ESPN on. But we’re going to manage the migration of that very carefully because right now we have a business — the multi-channel business — that is serving our company quite well.”

Disney has in fact managed that migration very carefully, with some over-the-top advocates arguing they’ve done so too carefully. And it’s understandable why they have. Linear ESPN is still very successful for them on a lot of fronts, and it’s notable that “linear” ESPN can be accessed by households without traditional cable or satellite, just through virtual MVPD subscriptions. Also, it would be difficult to just put all their linear rights on ESPN+ immediately for a number of reasons (including existing rights contracts with leagues and their desire to preserve main ESPN).

Beyond that, other data suggests it may not be time yet in North America for networks to make a full migration to emphasizing their OTT services. Canadian sports networks Rogers Sportsnet and TSN have both gone to full over-the-top subscriptions, but those packages are pricey (currently $20 CAD a month each for the main package, so $16 USD at current exchange rates; Sportsnet also has a digital plus package with rights not shown on TV for $35 CAD/$29 USD a month), and they don’t appear to be setting the world on fire in terms of the number of subscribers they have. And that seems to have been a similar story for streaming-only DAZN, at least in the U.S. and Canada.

But it’s quite notable to see moves like this Euro 2020 one, as that’s furthering that “migration.” It’s making the ESPN+ experience without a paired linear ESPN subscription significantly better for those looking to watch this tournament. And while this isn’t one of ESPN’s top sports properties, it’s still a pretty big event, and it’s notable to see it completely available (as long as we count the alternate feeds as “available”) without a linear ESPN subscription. That continues the OTT service-boosting trend we’ve seen from the NFL deals, and ESPN’s NHL deal, and more. And while we’re not yet even close to ESPN+ being “the app that people experience ESPN on,” this is another step towards that.