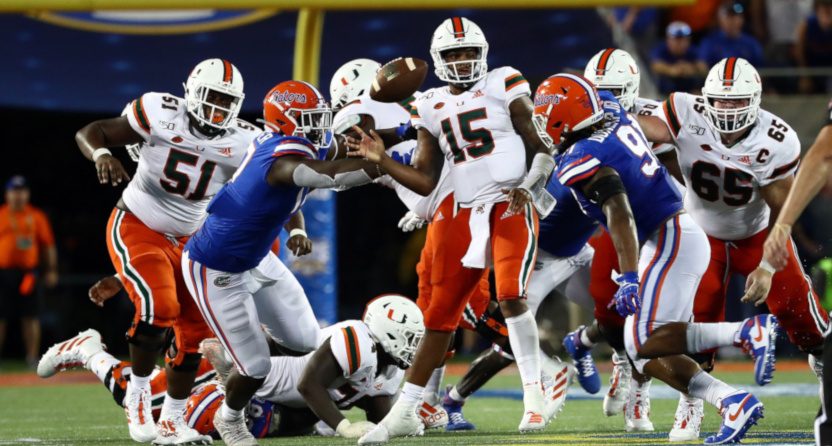 The NCAA football season got rolling this past weekend with a few Week 0 games, and the featured clash of Miami and No. 8 Florida wound up pulling in the best overnight rating (a 4.1) for a regular-season college football game on ESPN since Ohio State-Michigan State in 2016. And in the viewership numbers that came out Monday, it averaged 5.96 million viewers with a peak of 7.4 million, the best season opener on record for ESPN and the second-best regular-season Saturday game for them in three years.

ESPN also saw a 60 percent year-over-year rise for College GameDay from Disney World (fortunately, Disney World somewhat recanted their much-criticized “no signs” policy before the event) and a 50 percent rise for the afternoon FCS Kickoff game between Samford and Youngstown State. They also saw a 1.5 overnight for the documentary Football is US: The College Game, part of their programming efforts to celebrate the 150th college football season. But it’s the Miami-Florida rating that really stands out, and it could have an impact on Week 0 scheduling going forward.

It’s of course not particularly surprising that an unopposed game (there were a couple of CBS Sports Network games on Saturday as well, Villanova-Colgate and Arizona-Hawaii, but neither overlapped) drew well, especially considering that it involved the AP’s eighth-ranked team and an in-state rivalry. But what’s notable is how well it drew. As Paulsen noted at Sports Media Watch Saturday, there were only two unopposed games last season: Virginia Tech-Florida State on Labor Day, and Miami-LSU the night before, and those drew 5.58 million viewers and 6.55 million viewers respectively (with the caveat that Miami-LSU was on ABC rather than ESPN, so that comes with around 35 million extra homes that could potentially watch). So Miami-Florida wound up ahead of VT-FSU and behind Miami-LSU, and with the on-ESPN caveat, it looks like a very good rating indeed for the network.

That, combined with the strong ratings for GameDay, the FCS Kickoff, and the documentary, might provide even more incentive for ESPN to push for more Week 0 games and more strong matchups in that slot. It’s worth bearing in mind that Week 0 is a relatively new idea, and that it usually hasn’t seen great matchups. There was little ahead of the Thursday before Labor Day for a long span until 2014, when Georgia State played FCS Abilene Christian on the Wednesday before Labor Day (which is really more early Week 1 than Week 0).

After that, 2015 saw nothing in Week 0, and 2016 saw just a Cal-Hawaii game in Australia 11 days ahead of Labor Day. 2017 had five Week 0 games, including games with 14th-ranked Stanford and 19th-ranked USF (plus Power Five school Oregon State losing to Colorado State), but while 2018 also had five Week 0 games, it included no Power Five conference teams (the best matchup was either Hawaii at Colorado State or Wyoming at New Mexico State). So putting a Power Five matchup in Week 0 is new (and this game was initially set for Week 1, but moved up), but the ratings results here mean we could see that more often.

Of course, there are some hurdles to Week 0 matchups. An early start to the season means teams also have to start camp earlier if they want to be prepared, and that requires an NCAA waiver. (And previously, those exemptions have largely been limited to schools that will have a game at Hawaii during the season.) And administrators have some concerns about starting the season earlier, and about this meaning the season then runs a week longer. But, as Ross Dellenger details in a piece at Sports Illustrated, there are also plenty in college football interested in more regular Week 0 games:

Administrators here weren’t so sure that Week 0 would continue. Coaches here hope to see it extended. “I don’t know what the downside of it is,” says Miami’s Manny Diaz. An hour before kickoff Saturday, SEC commissioner Greg Sankey briefly outlined some of those drawbacks, from summer school to lingering waiver requests and so on. He expressed concern over extending it to future years or expanding it to even more games. It needs further discussion, he said.

…Even Diaz admits starting early has its consequences (for one, fans had to hurriedly adjust travel plans in the spring). The Hurricanes’ summer training was impacted, and now the season is a week longer, extra bye or not. Because of the 2019 calendar, teams already this season had two byes. “The thing that we’ll both have to manage going forward is you’ve got an extra week in your season,” Diaz said. “So I think just managing us for the long haul, it’s going to be a long season for these kids.” On the bright side, we all got college football five days earlier than normal. “I’ll be honest, I think people are dying for college football, and I think if you can get a big-time game like this for some people, I think it’s a heck of a deal,” [Florida coach Dan] Mullen says.

The ratings buttress Mullen’s claim that people can’t wait for college football to start, and ultimately, that may be the biggest factor in pushing more high-profile games to Week 0. Yes, there will be some concerns and perhaps some pushback from schools and/or the NCAA, and maybe this won’t happen instantly. But Miami-Florida certainly proved there’s a TV audience for a big Week 0 game or games, and the vast majority of college football decisions are made based on what works for TV. So it wouldn’t be surprising at all to see more high-profile Week 0 games down the road.