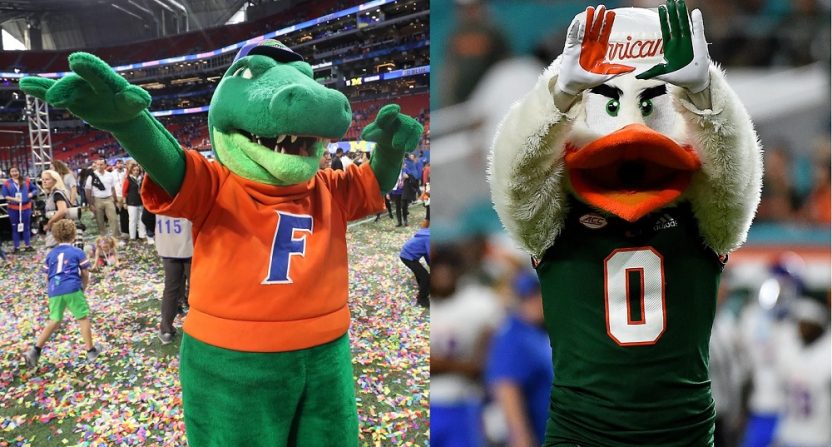 Florida and Miami are set to collide in football for the first time since 2013 this fall. But the game could get top billing in August instead of falling in with the rest of the crowded pack of Week 1 games, and that is because the game could be shifted up a week August 24th, college football’s unofficial Week 0 weekend.

Per the Orlando Sentinel, a decision has not been made on shifting the game yet, but one could come soon.

The Florida Gators versus Miami Hurricanes 2019 season opener could be moved up a week to Aug. 24, a source told the Orlando Sentinel.

The game is slated for Aug. 31 at Orlando’s Camping World Stadium, but the date change would better showcase the first matchup between the long-standing rivals since 2013. It also would mark the earliest start to the football season for either school.

Before the move can happen, however, the NCAA would have to approve it. A decision is expected soon.

The guys over at FBSchedules, an invaluable source for those of us who care about future college football schedules, theorized that the game’s potential move has been nudged forward by ESPN and the 150th anniversary of college football. Last fall, the network announced a pair of docuseries to celebrate the milestone.

That claim has been backed by Stadium’s Brett McMurphy.

Week 0 is traditionally bereft of major college football games, and the only teams that generally play have “Hawaii” in common. This year, only one FBS game is scheduled for Week 0. Last year, there were a total of five games. In 2017, we got a whopping nine games. Here are the Week 0 specifics, as per FBSchedules.

Under NCAA rules, only teams that play in Hawaii or have an opponent that plays in Hawaii can play the weekend prior to Labor Day, which has been dubbed Week Zero.

This season, there are currently two games scheduled for Week Zero — Arizona at Hawaii and Samford vs. Youngstown State, which is the 2019 Guardian Credit Union FCS Kickoff in Montgomery, Alabama.

Another theory, alluded to by the Sentinel, is because of potential hurricanes.

UF has opened the season on Aug. 30 three times, most recently in 2014 at home against Idaho — a game eventually canceled by severe weather.

Hurricanes have resulted in a number of college football postponements in recent years over the first few weeks of the season, including Hurricane Florence last year, both Hurricane Harvey and Hurricane Irma in 2017, and Hurricane Matthew in 2016. And while moving the game up by one week won’t eliminate hurricane-related postponements, it will leave Week 1 open for both Miami and Florida in case the game needs to be pushed back to its originally planned date.

A Week 0 game with no significant college football competition would be great news for ESPN, because it would ensure that all eyes would be on that game instead of any of the other numerous options out there. That would (probably) result in higher viewership, and would also allow ESPN to promote other games during Week 1. If this works out well, 150th anniversary or not, I wouldn’t be surprised if we started getting a kickoff game without Hawaii links during Week 0 each year to get everyone warmed up for the college football season.