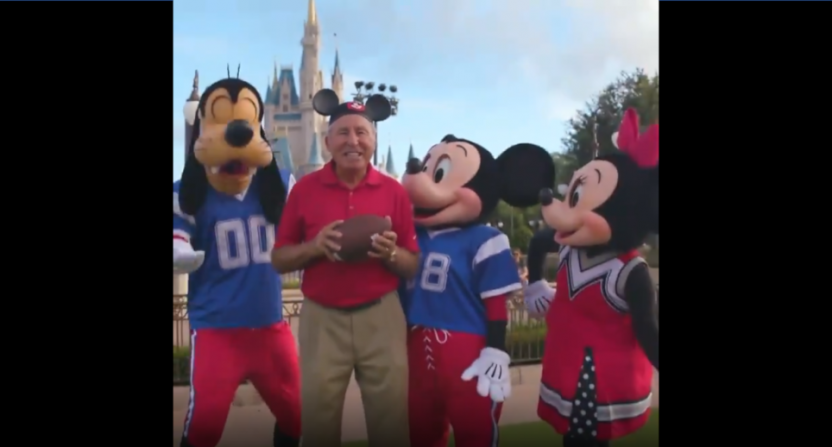 In an attempt to outdo even themselves at corporate synergy, ESPN is bringing College GameDay to Disney World for a Week 0 broadcast on Saturday, Aug. 24. They’ve usually started GameDay‘s road trips in Week 1, but they’re doing it a week earlier this year, and despite only a few games on that day (including Miami vs. Florida in the Camping World Kickoff), they’re using GameDay (in its usual 9 a.m. to noon timeslot) to kick off “more than 15 hours of football-centric programming” about the 150th anniversary season of U.S. college football.

However, doing a broadcast from Disney World’s Magic Kingdom park comes with a lot of restrictions, including some that seem to run counter to the fan passion that’s long been cited as a core pillar of GameDay:

So, there are no signs allowed (and the funny signs have long been a reason for people to tune in, even if showing them sometimes draws backlash), and saying fans “may catch a glimpse” of the broadcast (if they have a valid park ticket, which start at $109) but “there will be no special access for just College GameDay viewing” and “no designated access to ESPN commentators or the College GameDay set is planned at this time” sure makes it seem like there won’t be much of an opportunity for a crowd of fans to engage with the show in the way we usually see. That’s a shame, because the fans have long been critical to why this show has lasted and why it has worked. While College GameDay began in 1986, there was a huge jump in its popularity when it started going on the road each week, as veteran GameDay analyst Lee Corso told AA back in 2016:

“It used to be a show, now it’s an event. People come the night before and stay all night and all day to see it. There’s people around doing things like a party. It really has been wonderful. Because I think the secret of College GameDay is when we went on the road. We went on the road in 1993 to the Florida State – Notre Dame game, and it became a hit from that moment on, a tremendous hit. We’ve been going on the road for many, many years since then, and it’s been tremendous, the guys do a tremendous job putting it on the air.”

Corso and Lee Fitting (then a senior coordinating producer who was GameDay‘s lead producer for 12 years, he’s now ESPN’s vice-president, production) both said something similar in a 2015 panel at the College Football Hall of Fame, as relayed by Michael Collins of Saturday Blitz:

“The first time we ever took the show from the studio…my gosh the reaction was fantastic,” said Corso. “And I think that has been the secret of ESPN’s College GameDay. We’re at the site of the game and the enthusiasm of the crowd is great, but they never know what’s going to happen because it’s live television. So it’s really become an event. Not a show, but an event.”

“Going on the road leads to a lot of unscripted moments happening,” added senior coordinating producer Lee Fitting. “If we’re in a studio, a lot of that stuff that happens on GameDay wouldn’t happen.

“We like to say there’s no rules on GameDay, we just sort of let it happen, and that’s part of the beauty of the show.”

And yet, ESPN is deliberately putting GameDay in a location that appears to come with more rules than anywhere else they’ve ever put it, a location that won’t permit signs and a location that fans can’t get close to. And they’re doing so why, exactly? To show off that their parent company owns theme parks in Orlando? Yeah, no one would have heard of those otherwise. Maybe the goal’s to convince more college football fans to head to Magic Kingdom for the day and buy a park ticket, but that’s not necessarily that compelling either if you can’t even get close to the set.

It doesn’t seem like this was the only option for ESPN, either. Yes, Miami-Florida in Orlando is the logical Week 0 game to feature, and yes, that’s not at either school’s campus, so there isn’t a logical campus environment. But it would seem possible to do something around the stadium; that’s what SEC Network show SEC Nation is doing, albeit doing their show from the sidelines in the evening (5-7 p.m. ET) ahead of the game (a 7 p.m. kickoff) instead of doing their usual morning rundown. Or if it has to be at Disney World, why not at one of the many resorts or even just outside a park entrance, somewhere where fans could still show up and participate without running into Disney park restrictions?

This isn’t the first time that ESPN appears to have favored business considerations over the best possible GameDay experience. Most notably, they were accused of that in 2017 when they sent GameDay to New York City despite no nearby game and plenty of protests by fans, ignoring a lot of more compelling options. And that just happened to be while they were in the midst of difficult carriage negotiations with New York provider Altice, leading plenty to connect some dots there.

But while New York City wasn’t an appropriate college football environment at all, at least that show still allowed for plenty of signs and fan participation. It seems this one isn’t going to do that. So the upside for college football fans here is that there’s an extra week of GameDay, but the downside is that it sounds like it will be much more of a regular preview show of talking heads rather than the fan-influenced environment that’s helped GameDay to stand out and gain a much bigger audience than most pre-game punditry. And it seems unfortunate that ESPN’s made that call, and chosen a location that seems designed to eliminate what makes GameDay unique.