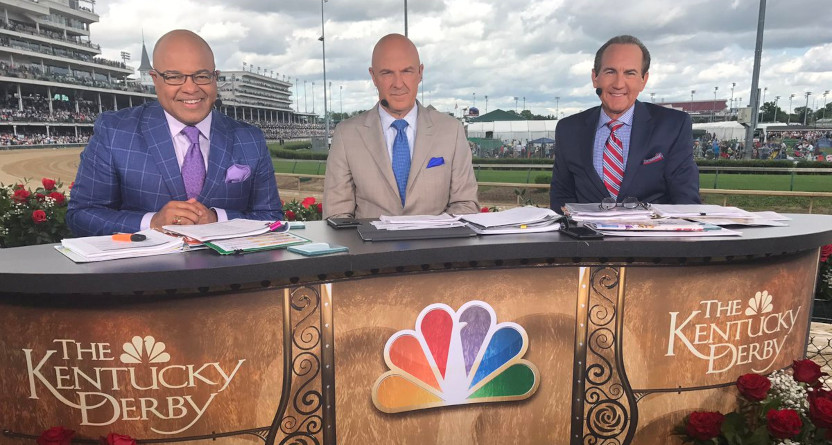 One of the fascinating changes to sports broadcasting during the height of the COVID-19 pandemic in 2020 and 2021 came from networks and broadcasters trying to adjust to not having fans at venues. In some cases, that involved fake crowd noise (and even fake fan images), and that often took criticism. But even beyond that, there were effects for broadcasters and producers in trying to present events without fans. And while the return to full stadiums happened quite a while ago in many sports, it’s still a new thing for some events, such as this Saturday’s Kentucky Derby (the 2020 edition was held in the fall with no fans, the 2021 edition had approximately a 60 percent attendance cap on reserved seating and a 30 percent cap on the infield, this year is expected to return to the usual 150,000-plus attendance). NBC’s Mike Tirico, Eddie Olczyk, and Larry Collmus discussed that on a conference call Tuesday (their full answers can be read at the end of this transcript), and Tirico in particular had notable thoughts on what full attendance will bring to this year’s broadcast.

We are very lucky, me, Randy [Moss] and Jerry [Bailey], our set is right on the first turn [as seen above in 2017]. We have fans — we’re up on the platform. Fans are about 10 feet below as they sit there, and we’re surrounded by fans almost everywhere you look.

…In ’21, there were a lot of people there. There were over 50,000. That was the largest gathering at that time. It was just great to see that many people. But then I look back to the picture in May of 2019 and May of 2018 and the place is jammed and the colors and the people and everything about it. I think it’s very additive to the energy of the day to have the constant buzz of fans right around you.

…I think the energy of being back amongst that larger group of fans will come through for all of us in our broadcast and our presentation. It’s a great question I hadn’t really given a lot of thought to, but it has me even more charged up to get there, be a part of Friday at Oaks Day when there are 100,000 people and then Saturday which is a once-a-year experience that is unmatched.

Olczyk also had an interesting line about what it will mean for his particular betting-focused coverage:

I think the adrenaline part of being amongst the betting crowd is something that hopefully comes across the air, not only from my vibe but I think the feel of the positioning of where I will be and Steve [Kornacki] will be. The interaction of going with the fans and with the bettors and a lot of things that happen off of the cameras sometimes are even more engaging and exciting than when I get on the camera and talk about who I might like or why I’m going in a certain direction.

It does go to a whole ‘nother level when you have a whole boat load of people from every type of background, and to be able to feel the vibe and to have the windows there and to get in line every once in a while when [senior horse racing producer] Lindsay [Schanzer] doesn’t want me on the air and go ahead and get my feet wet and have those tickets, and hopefully I can show a few more of those tickets to Steve this year and we can have some fun.

It is notable even from a viewer’s perspective how much of a difference fan attendance levels can make to a broadcast, and that’s part of why we saw so many attempts at fake noise and fake fans. But there’s a notable effect on the people doing the broadcasting as well, and Tirico and Olczyk’s comments here help to illustrate that.