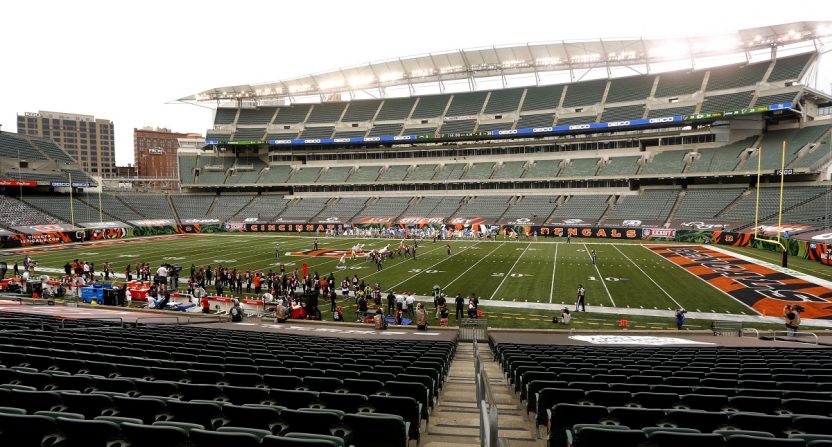 The NFL is essentially the last major sport to return to action, and with that their respective broadcast production. And while NBC, FOX, and CBS have all been back at it with other sports throughout quarantine, it’s still understandable that some of the wrinkles and changes required by the pandemic will take some time to work out, especially with no preseason.

A prime example: networks pumping in fake crowd noise. That’s something we debated a few months back, and since then it’s become fairly standard, despite not always working well. (Virtual fans are also now a thing, but only FOX elected to use them this week, and even then just for one game as a test run.) This week saw broadcasts struggle at times with volume and timing, which was to be expected. Still, with the Saints-Bucs afternoon game in particular, things were off to the point of being jarring to some observers.

figuring out how much crowd noise to pump in on a 6 yard gain pic.twitter.com/EuSndHAB3Z

Is the fake crowd noise they are playing for the Pats/Dolphins game annoying anyone else, or is it just me?

Wale wasn’t having it:

Aye this fake crowd noise throwin me off ?

The consistent crowd noise that doesn’t react to the game play is just … odd.

A few people rightly pointed out how pivotal the controller role is, whether it’s a human or an algorithm:

Who's in charge of switching the crowd noise to boos in the Superdome after the Lattimore penalty?

That's hilarious and a LOT of power for that guy.

Discussing the fake crowd noise with some author friends and wondering whether we can do something similar at book signings.

The real issues came, though, when the mix got to the point that it was overwhelming the actual booth:

That’s an issue that crosses over more from subjective taste to objectively harmful to a broadcast. It’s also an issue that is likely to be taken care of very quickly; the second half mix for Saints-Bucs, for example, felt more muted. Considering how unlikely an NFL season felt at all for much of 2020, though, most fans are probably just happy to have spent today watching football, whether or not the sea of recorded voices screaming at random times enhanced or detracted from the broadcast.

(Unless you’re a Lions fan, in which case we sincerely apologize.)