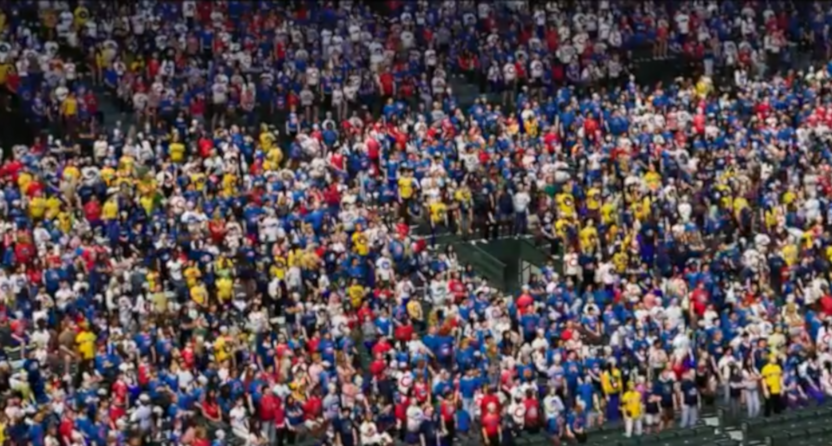 Virtual crowd noise of some sort or other has been used on quite a few (but not all)  broadcasts of games without fans, despite split opinions on that approach. “Virtual fans,” or computer-animated models in team clothing, is a step further still, though, and only Fox has really used that approach so far (and hasn’t always received the best reviews for it). An example of their virtual fans can be seen above, from a July 25 Milwaukee Brewers-Chicago Cubs broadcast from Wrigley Field.

When it comes to the NFL, the league will be providing virtual crowd noise (pre-recorded, and specific to each team’s stadium) to each broadcast, but the networks are free to take their own approaches when it comes to virtual fans. And as per John Ourand of Sports Business Journal, Fox will be the only network using virtual fans when the NFL starts up this week, and they’ll only be doing that on the Chicago Bears-Detroit Lions game (with plans to maybe expand that further in future weeks, though). Ourand got some notable quotes on why Fox is going that way while other NFL broadcasters are not:

Fox will be the only TV network to use virtual fans during its NFL coverage. The network will use fans during only one game in Week 1 — Bears-Lions — with hopes to use the tech more frequently as the season goes on. “We didn’t get a pre-season game on the NFL to do everything that we wanted to do and really look at it,” said Fox Sports Executive Producer, Exec VP and Head of Production & Operations Brad Zager. “Before we rolled it out everywhere, we wanted to have a game that we could focus on, and we’ll see what happens from there.”

NBC decided against using virtual fans for “Sunday Night Football,” saying it was too difficult — both technically and financially — to build virtual fans into every angle for all 25 cameras. That results in some shots showing virtual fans and some shots showing empty seats, which felt too gimmicky to “SNF” executive producer Fred Gaudelli. “This is not a shot at Fox because I think what they’ve done is tremendous, but it’s just not realistic,” he said. “It just didn’t feel right to me.”

Fox’s use of virtual fans has certainly been a significant undertaking from a technical side, with those fans created in Unreal Engine (the popular Epic Games game engine used in a long list of big-name video games), dressed in different team clothing, and even programmed to perform movements like the wave. Here’s how this looked on that aforementioned Brewers-Cubs MLB on Fox game in July:

Here's a look at the virtual fans at Wrigley Field for the Cubs-Brewers game on Fox. pic.twitter.com/rmA5lENFRH

But the reaction to the fake-fan approach certainly hasn’t been all positive, and it’s interesting that the other NFL broadcasters currently aren’t planning to use fake fans (and that Fox is planning to start by using them on just one game). And Gaudelli’s point about the technical and financial challenges of building fake fans into every camera shot they have is well taken; even regular-season NFL games come with just a ton of cameras, so there are further hurdles there than there are for a regular-season MLB broadcast.

At any rate, it will be interesting to see how fans watching the Bears-Lions broadcast react to the virtual fans, and to see where this goes from here. Will Fox use fake fans for all of their NFL broadcasts by the end of the year, and will other networks join in. Or will this remain something only seen on particular Fox games, or not even seen at all? There are currently quite a range of projected approaches to fans in the stands, too, and that could have an impact here; fake fans obviously make less sense to showcase if you do have fans in the stadium. And even teams without in-person fans could perhaps adopt a custom cardboard cutout approach like that used by many MLB teams, an approach which has seen a much more positive reception so far. We’ll see where this all winds up, but it’s definitely notable that Fox is the only NFL broadcaster looking to use fake fans so far, and that they’re only planning to do so on a limited basis at first.