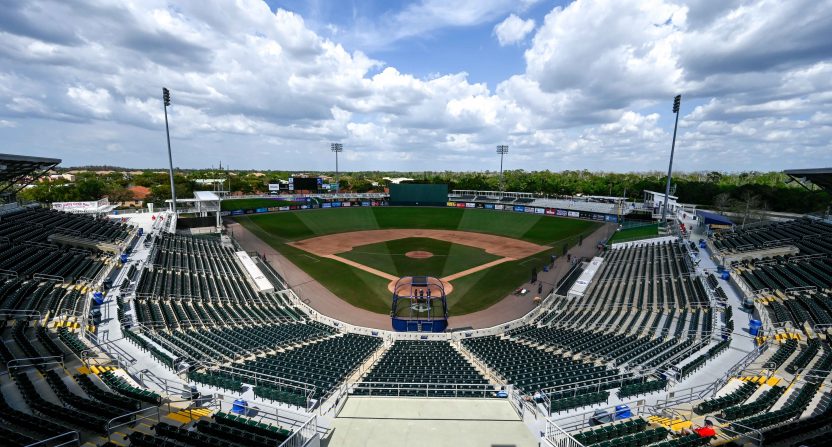 Since the Bundesliga’s return to the airwaves two weeks ago, the eyes and ears of viewers may not have been on the same page. That is because there are no fans in the stands, yet viewers are still hearing crowd noise. The artificial crowd noise has been a hot topic among fans, and leagues in America are considering doing the same thing once they get back to live action on TV.

In a poll we threw out on Twitter last week, opinion was split between those who liked it, those who didn’t, and those who just were not sure yet.

Two weeks ago, we did a very serious poll about artificial crowd noise during sports events. Now that Fox has rolled it out on Bundesliga games….your thoughts?

Two weeks earlier, the clear majority came from those who needed to wait and see about artificial crowd noise, followed by those who didn’t like the idea (at nearly the same clip as the poll from this week).

How do you feel about artificial crowd noise on broadcasts without fans?

Today’s question for our staffers is a simple one: are you in favor of artificial crowd noise, and why or why not?

Jay Rigdon: I’m not inherently against the idea, but if there were some kind of organic element to it, that would be the ideal solution. Just piping in sound we know isn’t real, especially if it isn’t tied directly to the action we’re seeing, it could come across more off-putting than just having an empty stadium. (It’s also probably sports-dependent; watching UFC with no crowd has made the fights seem all the more brutal, with every strike coming through audibly.)

Basically, if it can be done well, it could add to the presentation of some sports. But done poorly and it’s not worth it at all.

Ben Koo: Crowd noise is something that adds atmosphere, but we basically take it for granted because it’s subtle and consistent. Artificial crowd noise is the best option of a lot of not great options. It’s not going to be great, but it’s better than nothing. Even an iffy music situation on a long road trip is better than total silence.

Bad executions of fake crowd noise will be mocked and whoever figures it out best will garner praise. But either way, it’s happening and like everything right now, it’s the best option among a lot of bad options.

Ian Casselberry: Even if it’s artificial, I want crowd noise. Without it, these games will feel sterile. (Maybe they should, as a reminder of what’s going on.) The din of a sporting event is so important. If you’re not looking at the TV, hearing the crowd tells you a game is happening.

But crowd noise isn’t just a flat drone. It surges and diminishes during a game. Can artificial crowd noise believably simulate the build-up as a long pass, fly ball, or three-point shot travels through the air? The explosion when those plays hit their mark? Can that happen with a producer turning a dial?

If so, these games will be comforting. If not, the noise will remind us that this isn’t normal.

Andrew Bucholtz: Jay makes a good point about the organic element, and I think that’s a big distinction in this discussion. Some of the concepts being talked about here are truly “artificial” crowd noise that has nothing to do with the game, and I’d personally rather watch a game with no crowd sound than that; even if you modulate it so there’s a crowd roar at a key moment, it feels wrong to have that roar be about something else entirely. (Granted, many viewers may not know or care, but it still seems off.) I think the more promising approach is emphasizing remotely-generated noise that’s still connected to the game.

On that front, an approach being tested in Japan seems to have some merit. There, a Yamaha-developed app lets fans press buttons on an app at home to send pre-recorded cheers, claps, and more to different parts of the stadium. The actual audio heard won’t be those fans themselves, but it’s fan-generated at least, and that should make for more authentic reactions than if it’s just the broadcast production team deciding how the crowd would react.

What would seem even better still to me is getting actual live audio from fans via teleconferencing software, which we saw with the NFL Draft this year. Danish soccer team AGF Aarhus already created a Zoom wall of spectators for a match, and if audio from a call like that could be synced into the broadcast, that might give you more authentic remote noise. There are likely some technical challenges there, including lag (fans would react to something seen on TV, which is usually a few seconds after it actually happened, and that reaction would then come back to the stadium a few seconds later still) and volume balancing (each fan would probably have a different audio setup), and there are definitely content challenges to consider (what if the mic’d-up spectators say awful things?), but that’s an issue that exists with some in-person crowd noise too. So if there’s a way to get actual remote audio from fans, that would be my preference; following that, fans remotely generating audio also has some merit. But crowd noise that doesn’t have anything to do with the game in question is a negative for me.

Ken Fang: I’m not sure I want crowd noise piped in. However, I will say that when the Bundesliga came back, it sounded rather antiseptic with just the sounds of the players and coaches. We know fans aren’t in the stands. Whether the networks superimpose fans or teams put cardboard cutouts in the stands, it’s going to be weird for a while. This could lead to more creativity by the networks and leagues, having more players mic’d and allowing more in-game interviews, but they still won’t replace crowds.

It appears the networks are ready to pipe in the noise. It has to be done right, otherwise the wrong reaction to a home run, goal, buzzer-beater, or touchdown is going to sound strange. I’d rather the networks not do it, but this appears to be in the works so get ready to hear the fake noise until the fans are allowed back.

Joe Lucia: There isn’t a right or a wrong answer here. Fake crowd noise is fine when nothing is happening (like a particularly droll passage of play in soccer, or a series of three and outs in football, or several scoreless innings in baseball), but even then, artificial crowd noise can’t reflect the actual reactions of crowds in those situations (tongue in cheek cheering after several completed passes, relentless booing by the home crowd after a drop, the Bronx cheer for the first strike after several balls in a row). I also feel like it’ll ruin big moments – game-winning goals, walkoff home runs, go-ahead touchdowns, and so on. How can fake crowd noise accurately portray the absolute mental behavior of fans in those situations? I don’t believe it can, and it’s going to be weird when we see a huge moment in a game, and the cheering doesn’t reflect that emotion.

I also think networks have a great opportunity get unique sounds from field level that we normally don’t hear because of crowd noise, in-game entertainment, and the like. Remember back in Spring Training (which feels like eight years ago), when ESPN miked up a variety of players during games and received wide acclaim for it? Sure, in actual games that matter, players won’t be that fun and will be more serious, but hearing more of the natural sounds of the game will give fans a more authentic experience (even with announcers calling the game, graphics plastered all over the screen, and sound effects breaking the rhythm).

And if worse comes to worse and networks desperately want to use artificial crowd noise, make it optional. MLB.tv has multiple game audio feeds, including a ballpark sound option. Given that the artificial crowd noise isn’t being broadcast across loudspeakers in the stadiums, it shouldn’t be all that difficult to give fans the option of alternate audio tracks during the game – one with fake crowd sound, and one without.