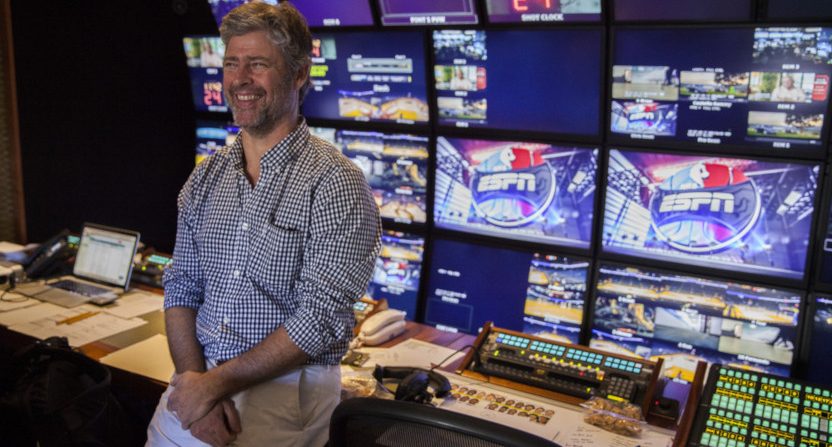 The NBA playoffs in the Orlando bubble have presented an unusual broadcasting situation where the same ESPN/ABC crew will be working Game 7s on back-to-back nights. Commentators Mark Jones, Mark Jackson, and Cassidy Hubbarth called the Denver Nuggets’ wild 80-78 win over the Utah Jazz Tuesday night on ABC, and they’ll also be calling Wednesday’s Game 7 between the Oklahoma City Thunder and the Houston Rockets (9 p.m. Eastern, ESPN). It’s also the same production crew working both games, led by senior coordinating producer Tim Corrigan, the company’s long-time NBA on ESPN and NBA Finals producer. On Wednesday, Corrigan (seen above in an ESPN Images photo, taken in the ESPN production truck during a Christmas Day 2015 game) spoke to Awful Announcing about working these back-to-back games, which he said is a thrill.

“Oh my gosh, it’s fabulous! It’s just the kind of thing you hope happens in the NBA playoffs, or in any sport’s playoffs, that kind of win-or-go-home, winner-take-all game, Game 7.”

“I’ve always loved the NBA. Even when I was in college, I loved watching great players play. I grew up in Virginia and I go back to the Washington Bullets with Elvin Hayes and Wes Unseld and those teams. I remember Golden State with Rick Barry, he was great. And Seattle and their great teams with Jack Sikma and Fred Brown and all those characters. I’ve loved the NBA for a long time, and then getting an opportunity to work on it and be part of it has been tremendous.”

“And like anything else you do, as the stakes get higher, whether it’s regular-season games or playoff games or conference finals or the Finals, there’s just nothing better than getting into these Game 7 positions because there’s so much at stake. And these guys are so great, and to watch them on these kinds of stages just makes it better and better.”

Not every Game 7 winds up being as close as Tuesday night’s, but Corrigan said his team tries to stick to the same approach regardless of if a game’s coming down to the wire or not, a lesson he attributes to San Antonio Spurs’ coach Gregg Popovich.

“Gregg Popovich has always said you can’t skip steps on how you’re going to win a championship. We don’t want to skip steps on how we’re going to produce things and direct things and document them, from when our season starts all the way through the Finals. Because if you can approach it the right way all the way through, you put yourself in a position to be successful when you have those key moments.”

There are some challenges in going from one series to the next, but Corrigan said his team is experienced at that, and he thinks it’s easier than normal this year given the bubble environment. He said with no travel between games or series, it’s simpler to follow what’s going on with other teams and other games.

“It would be better if you were just doing one series all the way through, but in the time that we’ve had the NBA, we really don’t lock into one specific series until you get down to the conference finals and the NBA Finals. So we’ve done it this way for a number of years where you switch from one series to another on a weekly basis. And now that we’re all living together here in the bubble, the switch from one series to another happens on a daily basis.”

“And we’re all living and breathing NBA now more than ever, because we’re either over at Wide World [the ESPN Wide World of Sports complex where the games are happening] producing and documenting, or we’re at the hotel watching the games together. We’re really just super locked in on it now. It aids the transition.”

Speaking of the bubble, it’s led to a lot of changes from the pre-pandemic broadcast norms. But Corrigan said he thinks that transition has gone relatively smoothly when it comes to the on-air broadcasts, and he credits the intense advance work for that.

“A bunch of us came here and surveyed it probably six weeks before people were going to be on the ground to start doing it. And then once we got to the site and realized that all this was going come together as we had all envisioned, it became less of a challenge on how to actually do our jobs, and more of trying to figure out how we’re going to do it better and what tweaks we’re going to make and cameras we might add and things like that as we went along.”

Another change thanks to the COVID-19 pandemic is to the broadcast trucks. As ESPN vice president (production) Mike Shiffman told Andrew Grief of The Los Angeles Times last month, their typical NBA game setup would involve one truck and 10 people in it. Now, they’re using multiple trucks for each game with fewer bodies in each. They’re also using more robotic cameras inside the arenas. And Corrigan said that’s all worked out well thanks again to detailed advance planning.

“Kudos to our production and technology and operations teams; we gameplanned from the start ‘Hey, these are the bodies we’re going to be able to have in the A unit, the B unit, the C unit, the D unit. Here’s what we’re going to have to do with manned cameras versus robotic cameras.’ As we talked about with the league, for health and safety, we did not want to have camera guys all over the floor at the start of this. So we were using many more robotic cameras and rail cameras and things and positions that we’d never used before. …I’m really excited about the changes we’ve been able to make in the line cut of our production from what it was before this to what it is now, based on these new technologies.”

Wednesday night’s broadcast will be on ESPN rather than ABC, and networks sometimes approach events slightly differently if they’re on cable rather than broadcast TV (as the latter comes with a wider potential audience). Corrigan said the ESPN NBA teams really don’t do much differentiation these days, though. He said they largely treat their broadcasts identically regardless of where they’re airing; there might be just a bit more basic explanation on an ABC broadcast, but hopefully not enough to turn off fans who watch the ESPN games.

“We’ve done this for so long now, and people love documentation and people love storytelling and how to get personal with players. So I’ll be honest with you, I’ve talked with Mike Breen, and Mark Jackson, and Jeff Van Gundy, and Mark Jones, and our producers, directors, everybody, and I think there was maybe a time a while ago where we were trying to treat it a little differently. But now, while it’s a bigger audience…we may be a little more apt to be a little more basic in storytelling things on ABC because you might get an audience that hasn’t followed this series through seven games, you might want to make sure they’re aware of some of the nuance and the anecdotal things, but you certainly don’t want to be disruptive to an ESPN audience.”

As for the Thunder-Rockets matchup, Corrigan said he loves the storylines there.

“You’re always going to turn to the star players with James Harden and Russell Westbrook and Chris Paul and what the stakes are for them and their legacies. You also look at the younger players that Chris Paul’s playing with and how he’s leading that group and what’s going on, and touching back on what kind of moments have happened in the series that have gotten us to this point. There’s always legacy at play with these players, and when you get to a playoff environment and a Game 7 environment, it heightens the intensity and the storytelling and everything leading into and around it.”

“We are involved in a history-making event. And in the time that I’ve been at ESPN, I’ve been fortunate to work on so many great properties, but for us, and the NBA, and Turner, we’re all in this together, and for us, to be involved in pulling this off when it happens is going to be a career highlight for everybody.”