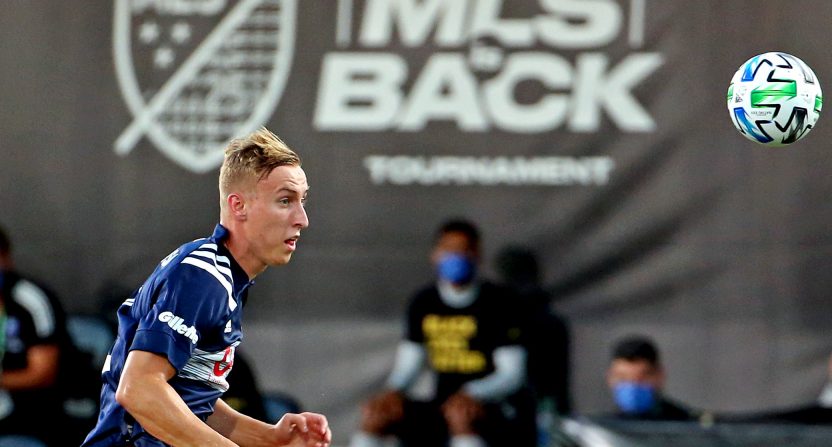 Fox Sports officially announced Friday that their coverage of the MLS is Back tournament will feature artificial crowd noise added to broadcasts.

Considering the widespread use of fake crowd noise for European soccer this should perhaps have been expected. Linear viewers won’t have a choice, but viewers on the Fox Sports app will be able to choose a separate stream sans crowd.

From the Fox Sports statement:

FOX Sports celebrates the return of American men’s soccer with the MLS is Back Tournament from July 11-August 5 across FOX and FS1. The network’s 16-match presentation features two of the nation’s leading soccer voices – John Strong and Stu Holden. Rob Stone hosts studio coverage each matchday alongside Alexi Lalas, with Maurice Edu and Holden joining throughout the tournament.

FOX Sports gives viewers the opportunity to watch matches with or without enhanced audio throughout the tournament. FOX and FS1 present the only English-language telecasts with crowd noise audio, produced from the network’s Los Angeles studios. On digital devices, including the FOX Sports app, viewers can choose from dedicated streams with or without added crowd noise.

Univision/TUDN will be using faux-noise for their Spanish-language broadcasts, while ESPN will be going without, as Steven Goff notes.

It’s especially interesting considering there had seemingly been more of a push against it than for it, with Portland Timbers owner Merritt Paulson even noting the other day that the Independent Supporters Council had spoken out in favor of natural sound.

Ask the Independent Supporters Council acct. i dont speak for them.

But I know MLS heavily consulted with them which is good

And now, two days later, we have most of the MLS is Back tournament set to take place with artificial noise. Kudos to Fox for allowing viewers who might be especially against the concept to switch to a stream that doesn’t have it, though. That kind of option should be more common than it is.

The MLS is Back tournament kicks off tomorrow night at 8 PM ET with Atlanta United taking on the New York Red Bulls on network FOX.