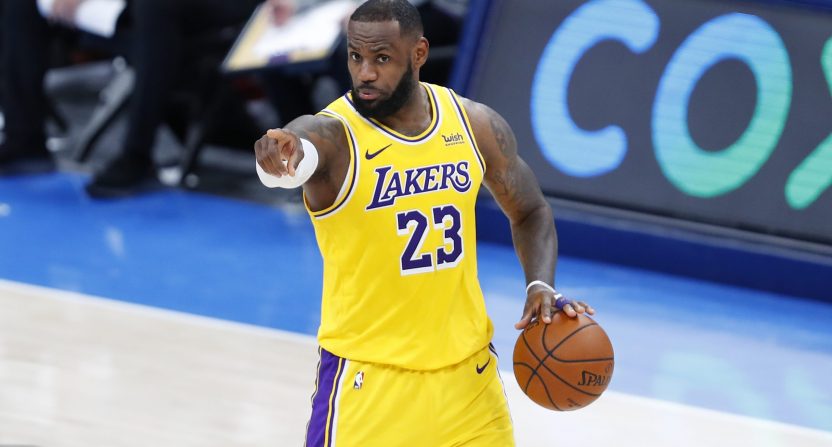 Three weeks after first dropping an allegation that LeBron James tried to get her fired from ESPN (on her own new podcast at The Athletic), Michelle Beadle has added some more details. She spoke to Ethan Sherwood Strauss for his Substack podcast, and said that this pressure from James (seen above in January 2021) came with a specific replacement in mind. In a New York Post writeup of these comments, Ryan Glasspiegel says “It is highly probable that Beadle was referring to Rachel Nichols”; there’s some logic to that, but Beadle does not specifically spell out who she means, so the Nichols connection is an inference rather than proven fact. Here are some of Beadle’s comments on Strauss’ podcast, via Glasspiegel’s transcription:

“To find out … I was just like ‘hey, what a weird person to have any input on your life,’” Beadle said.

“He had a person at the network who he wanted. He wanted her to be the host of [NBA Countdown]. He does not like me, and I honestly have stopped trying to figure out why. For some reason, it goes back years. I’ve been around Maverick Carter. He refuses to shake my hand.”

…Previously in the podcast with Strauss, Beadle had said there was “garbage” going on behind the scenes and how it is a “cutthroat” business.

“For me personally, it was always a woman-on-woman thing,” Beadle said. “Could we just be more cliche? That is just a played-out lame thing people assume, and for it to actually come to fruition is just a disappointment.

“I had a job that was wanted by people. I get it. I wanted it too. It was a great job. In the game of trying to get that job, I learned that people were willing to do things that I just wasn’t gonna do. I wasn’t gonna play games with the media. I wasn’t gonna spread lies.”

There are a few things of note here. For one, yes, we’ve seen before that James and the people he employs have a small set of specific media people they’re willing to work with, as with the insistence on non-ESPN employee Jim Gray hosting The Decision on ESPN. But beyond that, there’s a notable escalation from “I want this person gone” (bad enough for someone covered by a media outlet) to “I want to dictate who will replace them.”

However, it’s worth noting that while Beadle did leave ESPN in the fall of 2019 (she had her contract bought out), and while her specific NBA Countdown hosting role was filled by Nichols and Maria Taylor (both now also gone from ESPN), there’s been no direct suggestion that James was involved in those specific moves. Beadle’s comments here have been that James “wanted” her off Countdown and “wanted” someone else (presumably, though not assuredly, Nichols, although the suggestion of it being Nichols is supported by Beadle’s response to July’s NYT report on Nichols). But her initial “he tried” comments on James indicated his push was unsuccessful. So even if the presumed desired result (Beadle out, Nichols in) at least partly happened, it’s unclear that it was at James’ instigation.

There are also questions of how Beadle knows “He had a person at the network who he wanted.” It seems highly unlikely anyone in James’ camp told her that, and it seems highly unlikely that her potential replacement would tell her that. While it’s possible an ESPN executive might have told her “Hey, LeBron wants us to get rid of you and bring in this other person,” that would itself come with a lot of questions on if the executive was being truthful, on why they would tell her that, and more. Also, the “I wasn’t gonna play games with the media. I wasn’t gonna spread lies” comments seemingly deserve some more clarification on just what “games” and “lies” this other person was involved with.

And ESPN’s particular corporate structure is also worth keeping in mind here. There are a whole lot of people at that company, including at executive levels, who have access to a lot of information, but aren’t necessarily making the final decisions on on-air roles. So even if an ESPN executive told Beadle this, they didn’t necessarily obtain that information first-hand from a conversation with James or his representatives, and they didn’t necessarily make the eventual Countdown staffing decisions. The amount of influence (if any) James and his team actually were able to exert here is far from clear.

But, with that said, these are notable allegations. The idea that James’ camp would try to remove one particular ESPN studio personality from their primary NBA pre-game show is quite something in its own right, and that grows to a whole new level of notoriety if it came with a specific replacement. The only evidence of this to date is in Beadle’s comments, and those aren’t completely specific, and they don’t come with any indication that the alleged comments from James or his camp led to a specific change, so this isn’t necessarily a crisis for ESPN at this point. But the alleged behavior from James and his team here certainly is concerning for ESPN’s NBA coverage, which absolutely should not be beholden to any particular player they’re covering. And even if the change wasn’t made at the time of the alleged request, the supposed change James’ camp asked for here still happening (albeit in a different form, and albeit much later with perhaps plenty of other context) raises questions about ESPN’s executive-level dealings with James.

At any rate, it’s significant that Beadle is now being more specific in her comments about James’ alleged attempts to exercise undue influence on ESPN. There still isn’t necessarily anything here that rises to the level of actual impropriety from ESPN, as Beadle hasn’t yet claimed that her eventual buyout and partial replacement with Nichols was about James, or even that James’ supposed demands led to any actual ESPN action. But it’s definitely notable that she’s spelling out more of this, and this is all interesting context to keep in mind when looking back on the last few years of NBA Countdown (now hosted by Mike Greenberg). It’s also worthwhile context to consider with ESPN’s ongoing coverage of James; are on-air people at the network going to be more careful when discussing him in order to try and avoid a similar James push for their dismissal?