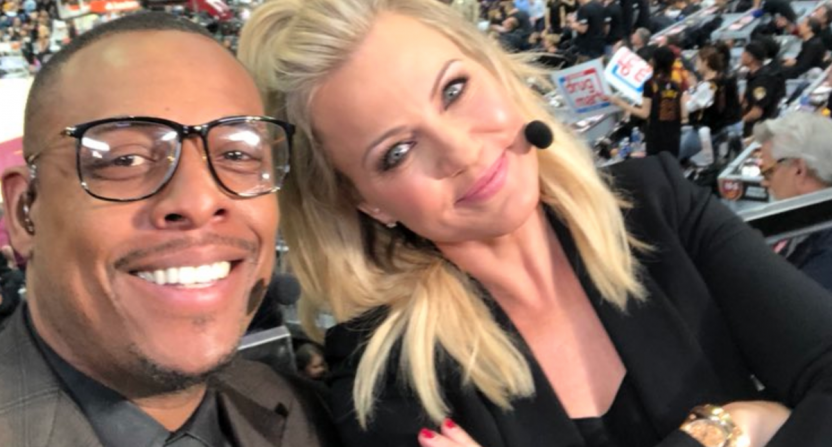 Michelle Beadle’s new podcast with The Athletic debuted this week and for her first interview on the show, she brought on a strong, outspoken guest.

Former ESPN colleague Paul Pierce joined Beadle from a hookah bar in Los Angeles to talk about their days working together on NBA Countdown, experience with dating apps (notably Bumble), the theory that he left the court in a wheelchair during Game 1 of the 2008 NBA Finals because he pooped his pants, and the two’s respective feelings about LeBron James.

Pierce was fired by ESPN after posting an Instagram Live video showing him drinking, smoking, and playing poker with strippers dancing in the background. However, the Hall of Famer wasn’t too upset about the dismissal as reports made it clear that ESPN and Pierce weren’t happy with each other. The network didn’t think he was working hard enough as an analyst, while Pierce was tired of rehashing the same talking points on the air and looked forward to the end of his contract.

Related: Paul Pierce on working at ESPN: “You have to talk about LeBron all the time.”

Naturally, Beadle wanted to put Pierce on the spot about ESPN right away, asking him about posting that video and subsequently being fired.

Paul Pierce on ESPN firing him: “I was tired of it anyway, truthfully.” pic.twitter.com/g7qNRpC1Vt

“I was tired of it anyway, truthfully,” said Pierce. “I got nothing against ’em, but I was getting bored there, stuff was changing all the time, and it just wasn’t the same feeling like it was when we was doing it.”

Pierce went on to explain that he didn’t realize an Instagram Live video streamed out live and thought he could go back and decide whether or not to post it later. Even worse, he didn’t know other users could record the video and share it online, making it go viral.

Yet maybe the most interesting tidbit from Beadle’s interview with Pierce is the revelation that LeBron James tried to get the NBA Countdown host fired. Most know about Pierce’s supposed feud with LeBron, going back to when they faced each other as on the court. But apparently, LeBron wasn’t a fan of Beadle either, a grudge that began when she made fun of “The Decision.”

Michelle Beadle says LeBron James tried to get her fired from ESPN: pic.twitter.com/MtzGBr5P5u

“He tried,” said Beadle, responding to Pierce bringing up the rumor. “He did try to do that. I was like, ‘Wow, I’m honored that I’m even on your mind. Thank you very much. That’s a weird place for me to be.'”

Hopefully, Beadle elaborates on this in a future podcast. Maybe if there’s enough of an uproar among sports media and fans. Would she have talked about the LeBron thing if Pierce hadn’t brought it up? Or maybe she wanted him to.

The entire podcast conversation is worth listening to, with Pierce stating how much it would take for him to box the former Metta World Peace (now Metta Sandiford-Artest) and his upcoming work for Showtime, which includes appearing on the All the Smoke podcast with Stephen Jackson and Matt Barnes, contributing to the premium cable network’s boxing coverage, and working on documentary projects.

Oh, and they address the wheelchair poop thing.

“If you poop your pants, does it make sense to sit down and mush it in a wheelchair?”

Beadle’s podcast, What Did I Miss?, can also be viewed on YouTube in addition to being available on your favorite podcast app.