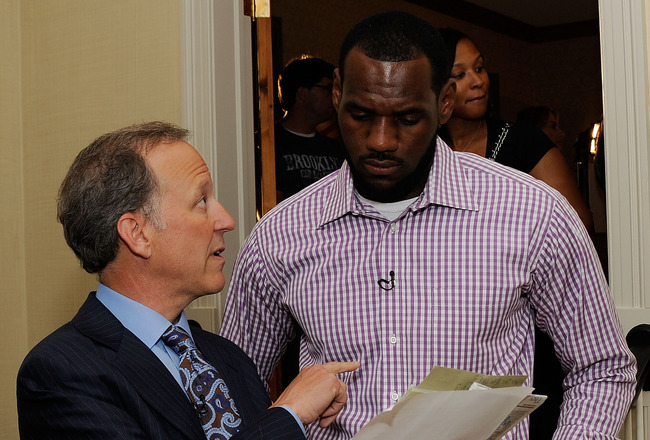 With the one year anniversary of The Decision festering through the sports world, Jim Gray made an appearance (audio at the link) on the Dan Patrick radio show to talk about his brainchild.  A year later, and The Decision’s lingering, distinctive, disgusting odor still circles throughout the sports world… and Jim Gray still wants to claim the credit for it.  From his namedropping of Steven Spielberg’s partners to being surprised by the criticism, (really?  REALLY?) to not wanting a mulligan on the inane questions he asked LeBron before the actual decision, Gray comes off as a man very content with his role in the circus that was The Decision.  The quotage comes from Sports Radio Interviews…

How the idea came about:

“I was with my wife and I think it was game two of the NBA Finals between the Celtics and the Lakers in Los Angeles at the Staples Center and I was sitting in the stands and walked down at halftime to say hello to Maverick Carter, who was sitting in the front row with Ari Emanuel. We just got to talking and David Geffen, one of Jeffrey Katzenberg’s and Steven Spielberg’s partners was sitting with him as well and we just got to talking and I said to Maverick it’s going to be an interesting summer and I would like to do the first interview with LeBron when he decides on his team. He said you know we can think about that, that’s not a bad idea. I had a history with LeBron. Interviewed him when he was in high school, did his first game when he played against the Sacramento Kings, was there the night that Gordon Gund won the lottery for the Cleveland Cavaliers, interviewed him on the night of the Draft and so on and so forth. I had known LeBron for some time so he said he would consider that. Then I said better yet why don’t we announce his decision live on television and go buy an hour of air time on a network and just explain it to all the fans at one time where he is deciding to go. Ari jumped in and said that’s a brilliant idea. Maverick said ‘you think so? Can you put this together?’ Ari said we gotta do this. Maverick said we can give a lot of money to charity and it just kinda went from there. That’s how it started, just kept in touch every once in awhile texting Maverick throughout the course of whatever it was, the next three or four weeks, and it became The Decision.”

What criticism has surprised him the most since The Decision:

“Just that there is so much of it. This after all was just a television show. I think what had probably happened is that everybody in New York and New Jersey were hoping it was the Nets and Knicks. He had meetings with them and the folks in Los Angeles, the folks in Chicago, and the people back in Cleveland, everybody had their hopes up. When he finally decided on Miami all the people in all those other cities were disappointed because they all wanted him to play there. There’s only one place you can play at a time. I think it just got built into such a thing where there was a letdown in all these other cities. I’m surprised that it still gets the attention that it gets. I’m surprised at the reaction when you go to certain cities and he does to play in certain cities and they’re booing. A lot of those cities didn’t even have a chance to get him. I don’t think that anybody could’ve foreseen what has gone on. Did you foresee this?”

“Mulligan in terms of what I would have asked? (Host: Yeah. Anything.) I probably would’ve asked LeBron to explain why we were at the Boys and Girls Club because to the audience, in looking back at the tape, we never said why we were there.”

Whether or not he would do the show all over again:

Gray just advanced to the second round of our Joe Morgan Memorial Tournament to place a new face on AA’s Mount Rushmore, and this interview just gives his critics more ammunition.  I think he may have won a few more votes for the next round.  Check AA on Wednesday to see who he faces in the second round.