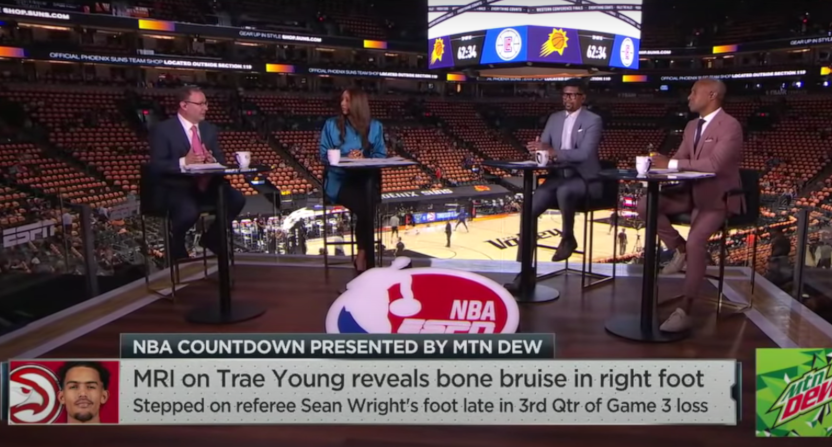 In a piece published Sunday morning titled “A Disparaging Video Prompts Explosive Fallout Within ESPN,”  Kevin Draper of The New York Times takes a long look at the year-plus of developments at ESPN in the wake of Rachel Nichols making a phone call from her hotel room with her video camera running, with some of that footage then being passed around inside and outside ESPN (to pushback from ESPN management), but little discussion of what was actually on that footage. Draper’s piece reveals many previously-unprinted details of that call, including that it was to Adam Mendelsohn, a long-time advisor to LeBron James, and that it included Nichols complaining about Maria Taylor’s elevation over her to host the NBA Finals. Here’s a particular quote that stands out (it’s contained in the first minute-long audio clip embedded in the Times article, for those who want to see the surrounding context):

That comment, and others in that conversation (this particular one comes a few minutes after Nichols saying ESPN was “feeling pressure” on diversity), have created a year-long firestorm within ESPN. Those comments were seen widely within ESPN, as they were recorded from her still-running camera and put into a folder many people had access to, which led to cellphone recordings of those comments (to avoid IT tracing) being passed around, including four minutes being sent to Deadspin. And they led to a lot of pushback internally against Nichols.

What’s really interesting is Draper’s reporting on how this has led to major awkwardness for the Taylor-hosted NBA Countdown (seen above in June 2021). That includes Taylor writing to ESPN executives  (including president Jimmy Pitaro) after this incident and saying she wouldn’t finish covering the (2019-20) season. She then changed her mind and said she would host Countdown during the playoffs if she didn’t have to interact with Nichols; Draper’s piece then says “In Taylor’s view, according to six people who have spoken to her, ESPN executives agreed to the stipulation but violated it almost immediately by allowing Nichols to make short appearances without interacting with Taylor.” And that led to continued drama, including at the start of this year’s playoffs, where ESPN tried to make all Countdown reporter interviews pre-taped (presumably so Nichols’ stood out less) and faced a potential boycott from the show’s cast:

As the N.B.A. playoffs started in May, the stars of ESPN’s marquee basketball show, “NBA Countdown,” discussed whether they would refuse to appear on it.

…A preshow call with Taylor and the other commentators — Jalen Rose, Adrian Wojnarowski and Jay Williams — as well as “NBA Countdown” staff members had turned acrimonious, and Jimmy Pitaro, ESPN’s president, had several phone conversations while at a family event to try to help smooth things over.

…Shortly before the playoffs, however, ESPN executives said that if Taylor continued to refuse to interact with Nichols on air, no reporters would be allowed on the show live. “NBA Countdown” pushed back to no avail.

On the preshow call involving the stars of the show and production staff in both Los Angeles and New York, Taylor insisted to an executive that she be able to conduct live interviews with sideline reporters. She also brought up the recorded phone conversation. Wojnarowski jumped in and called Nichols a bad teammate. Rose said that ESPN had asked a lot from Black employees over the past year, but that he and other Black employees would extend their credibility to the company no longer.

Taylor, whom executives had asked numerous times to change her interactions with Nichols, said that the only people punished by ESPN’s actions were women of color: Johnson, herself and the three sideline reporters — Lisa Salters, Cassidy Hubbarth and Andrews — who received lesser assignments so that Nichols could have the lead sideline reporter role and now were not being allowed to appear on the show live.

That piece goes on to note that Pitaro spoke to Taylor and Wojnarowski, and then to Wojnarowski alone, and asked if returning to the status quo of both live and pre-taped reports would solve the problem. That’s where things eventually landed by the end of that day, although Draper’s piece has a comment from ESPN vice-president (communications) Josh Krulewitz that “the decision regarding reporters on these shows was made solely by NBA production management.” And that’s fascinating; it illustrates that the fallout from this Nichols call has continued, has impacted many more people than just Taylor, and has also altered ESPN’s plans for on-TV coverage. (Also notable in that piece is the note that the only person actually punished over Nichols’ call was Kayla Johnson, a Black producer who admitted to sharing footage of it with Taylor; she was suspended for two weeks without pay, given less desirable assignments when she returned, and eventually left the company.)

It’s also worth considering this week’s report from Andrew Marchand of The New York Post about Taylor’s contract expiring as of July 20 and ESPN’s various offers to her in the new context offered from this Times piece. What was particularly interesting about that Post piece (which appeared to have a lot of management-side sourcing, and not much from Taylor’s camp) was its discussion of how ESPN had made Taylor an initial offer of “near $5 million” at one point “during last year’s pandemic,” but that their current offer was more “in the $2 million-$3 million range.” It’s unclear if that initial offer came before this Nichols call and the blowback from it. Either way, the current offer to Taylor appears to be much less, and the ongoing Countdown conflicts (as illustrated in Draper’s reporting) may have been a factor in those negotiations.

All of this is worth reading in terms of the larger context of racial issues at ESPN, which Draper explored in a detailed feature last July that saw many Black ESPN employees stating they often didn’t feel respected, weren’t given pathways to promotion, and were warned what not to discuss on the air. Taylor was involved in one particularly notable incident there; she was speaking about her experiences at ESPN on a wide conference call, and was interrupted by white announcer Dave LaMont calling her remarks “venting” (without realizing his mic was on). And her comment in that aforementioned email to Pitaro and others after the LaMont incident and the Nichols incident is notable:

“I will not call myself a victim, but I certainly have felt victimized and I do not feel as though my complaints have been taken seriously,” she wrote in an email to ESPN executives, including Pitaro, two weeks after the incident, which was obtained by The Times. “In fact, the first time I have heard from HR after 2 incidents of racial insensitivity was to ask if I leaked Rachel’s tape to the media. I would never do that.”

We’ll see what comes out of all of this at ESPN, particularly with Taylor’s expiring contract. But it’s clear that the 2020 Nichols call is continuing to affect ESPN decisions and NBA on ESPN coverage.

[The New York Times; Countdown screengrab from ESPN on YouTube]