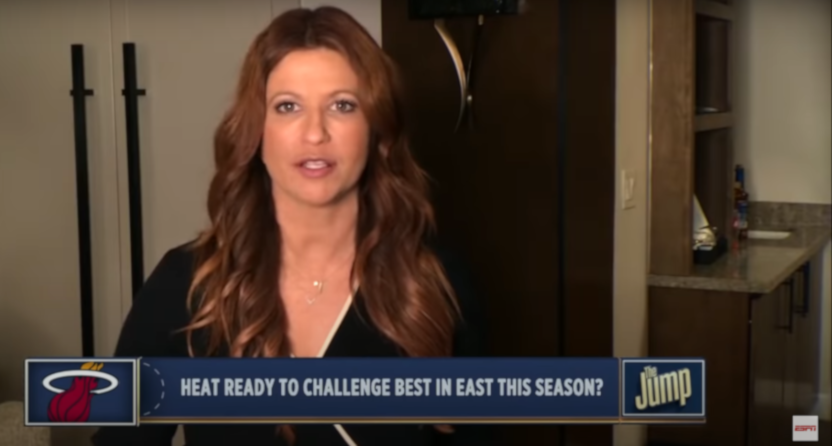 One of the stranger sports media stories in some time revolves around recordings of a phone conversation ESPN’s Rachel Nichols had in her hotel room in Orlando. The video feed used for Nichols’ show The Jump (which she’s been shooting in her room during quarantine ahead of the NBA resuming play; a screengrab from the actual show is seen above) was somehow running while she wasn’t aware of that, and it captured her discussing ESPN staffing decisions and more in a phone conversation with an unidentified party. We know this because an ESPN employee recorded portions of this video feed on their phone and cut them up, and someone then sent some of those clips to (G/O Media’s attempted revival of) Deadspin.com.

A story posted on Deadspin.com on this late Wednesday night details that they received about four minutes of footage from this conversation (which was reportedly about 30 minutes long), and says “the videos were sent to Deadspin as an attempt to discredit Nichols’ job status within ESPN, and with the public at large, with the anonymous source texting our reporter that the videos would “expose” Nichols as a “back-stabber” and a phony ally.” The site didn’t post those videos, but said they didn’t live up to those claims. But the more interesting elements of this are that Nichols was somehow recorded without her knowledge, that an ESPN employee then recorded clips from that recording and passed them around, and that someone then leaked them externally. As per TMZ, ESPN has condemned this in a statement:

“We are extremely disappointed about the leak of a private conversation. It’s indefensible and an intrusion on Rachel’s privacy.”How did this happen? Crossing Broad’s Kevin Kinead has some insight on the technical side of how someone got this clip, and why it wound up as a cellphone recording of a recording:

I can say from my experience in television that we would typically record lengthy raw video feeds, which all employees can then access in our system. This is how we would take pre-recorded segments and teases and edit them before inserting into newscasts. As such, there are hot mics portions of the video where anchors or meteorologists are talking about random stuff, like the Eagles game or their dog or cat. In this case, the perpetrator had access to one of these feeds and shot it off his phone, because he didn’t want I.T. people to be able to trace any clipped footage back to him specifically.

In this case, Nichols obviously didn’t intend for this conversation to be recorded on video. But it’s unclear if the initial recording came from someone remotely activating her recording setup or if it was just still running after her show. In either case, there becomes clear intention of an illicit recording when an employee is recording this recording and passing it around. And while someone being able to remotely activate a recording setup in a hotel room would be a huge problem, even the lesser scenario here (that setup running by accident, but an ESPN employee noticing that, rerecording it, and sharing those clips with others) is still a giant mess for ESPN.

This is much more problematic than many hot mic comments, which A. normally come when someone’s actually wearing a mic (they just think the broadcast isn’t using their audio at that moment) and B. are from a booth or a sideline rather than someone’s hotel room. Especially after the situation with a secret peephole video of Erin Andrews in a hotel room in 2009, which led to Michael Barrett being sentenced to 30 months in jail and to Andrews seeking $75 million in a lawsuit (she was awarded $55 million in damages, but likely didn’t receive much of that), ESPN employees should know better than to record a video like this and pass it around. And it’s remarkable that someone at ESPN thought this was a good idea to record and share.

Even if it turns out that the initial recording of Nichols was thanks to an inadvertently still-running feed rather than someone intentionally spying on her, whoever stumbled on that should have deleted it, or alerted superiors, or done anything other than record clips of it and send them to others. And it’s particularly strange to see whoever eventually sent this to Deadspin.com doing so with the intention of discrediting Nichols. She’s not the one who comes off badly in this situation; it’s whoever recorded videos of her without her knowledge and then passed them around.