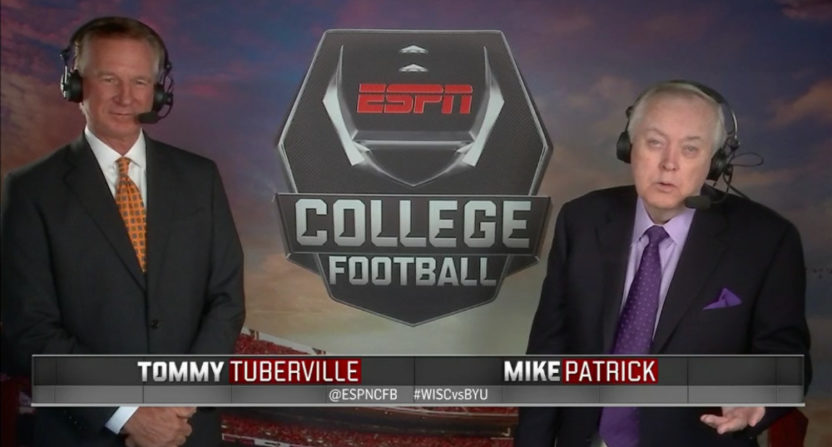 Hot mics have caught plenty of broadcasters’ slip-ups over the years, from Tony Dungy to Jim Nantz to Keith Hernandez, and ESPN college football analyst Tommy Tuberville and play-by-play commentator Mike Patrick appear to be the latest hit by this. ESPN regularly does “instant analysis” segments with their broadcasters after games, which are usually taped and shown later.

Somehow, extra air time of Tuberville and Patrick talking before and after the actual hit following Saturday’s Oklahoma State-Iowa State game made it out into the public realm, so we get to hear the two mocking each other and possibly the crew in rather scatological terms not intended for air:

Remember: the mic is ALWAYS HOT! Mike Patrick and Tommy Tuberville ..well just head to the :50 mark for the best stuff. pic.twitter.com/Rk0DLUmlel

This starts with Tuberville saying “I know, we always knock this out the first time, yeah, come on, let’s go,” and it then turns into him doing the actual segment, which goes perfectly fine. The camera then cuts off and Tuberville says “Mike’s got to do it by hisself now. That’s no fair, y’all make me do this shit.” Patrick then says “I don’t even take a dump by myself, alright?” and Tuberville laughs. Tuberville then has a conversation with someone who isn’t miked up, and says “What? Oh, thank you. Thank you, dickhead. Slappy.” Patrick laughs and goes “Aw, geez.” Tuberville then says “This is going to take forever. These damn folks stay here till the end, they’re not going anywhere. That escort we’re getting out here, Barney Fife with a little bubble on top.” Someone else then says “One bullet, and it’s in his breast pocket.”

There’s nothing really objectionable said here, unless you’re strongly against profanity in all circumstances, and this is pretty typical behind-the-scenes media conversation. And it’s better than Tuberville saying, for instance, that Lubbock “looked like Iraq.” (Which was in an actual on-air interview!) And these comments probably won’t haunt him as long as, let’s say, what he said about pine boxes.

Plus, Tuberville’s ribbing of Patrick for making him do this one alone is interesting, as these segments have often involved both broadcasters; it’s not clear if it was Patrick’s call or a producer’s call to have Tuberville fly solo here. In any case, the extra scatological commentary isn’t exactly what ESPN wants publicized to the world. It’s not clear who’s fault it is that this leaked, but it’s one more reminder to be very, very careful while wearing a microphone, whether you think it’s hot or not.