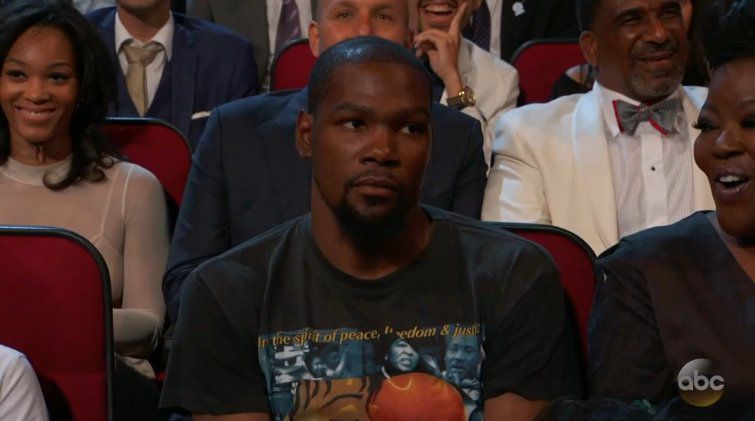 Fox Sports pundit Doug Gottlieb has delivered many ridiculous takes over the years, from calling a civil lawsuit accusing Derrick Rose of rape a “money grab” to claiming agents paying NCAA athletes is “indentured servitude” (unlike the schools not paying them) to bashing Tennessee fans for not wanting Greg Schiano and claiming Larry Bird was better than LeBron James to raising steroid speculation about Adrian Beltre thanks to “the Dominican Republic’s dark history of PED abuse” and just dropping all manner of absurd takes on the NFL, Urban Meyer and Baker Mayfield. But the pretzel loop of logic Gottlieb delivered on his Fox Sports Radio show Wednesday was special even by his standards, where he argued that the New York Knicks’ apparent plan to offer Kevin Durant a max contract despite his Achilles’ tear “feels like desperation” and “If I’m Kevin Durant, that kind of turns me off.”

The key part there starts around 2:40:

“For the Warriors, I don’t think it’s a sign of weakness. For the Knicks, the desperation is ‘Hey, we know you can’t play probably for an entire year, and we just had Kristaps Porzingis who didn’t play for an entire year. We’ll still take you! We’ll still love to have you!’ Now, of course, if you see the good in people, you see the good, ‘Well, the Knicks moved all this cap space, moved mountains to make space for Kevin Durant, hired a coach that he would like to play for, put in place a front office that he would like to work with, that would allow Rich Kleiman [Durant’s agent] in the building, to kind of ‘be a part of the growth’ and blah blah blah blah.'”

“If I’m Kevin Durant, that kind of turns me off. ‘You still want me?’ ‘Yes.’ I understand everybody wants to be wanted, and there will probably be other offers, and maybe he looks at it in the Gottlieb sort of perspective of ‘Hey, they want me whether I have one good leg or two, they’re all in on the business of Kevin Durant.’ But when you stop and take a breath and realize what that means for the Knicks, I’m not sure it comes across as well as they think it should come across.”

There’s a whole lot of absurdity in this take. For one thing, it seems quite likely that it’s going to take a max contract to land Durant; Gottlieb even mentions that the Warriors are almost sure to offer one, and he mentions reporting from Sports Illustrated‘s Chris Mannix that multiple NBA GMs said Durant’s injury wouldn’t (hypothetically, of course, to avoid tampering) stop them from offering him a max deal. So Gottlieb’s “desperation” premise is wrong, as it’s not like the Knicks are offering more than the market (because they can’t).

And while the merits of offering a max contract to Durant can be debated (pro: he’s a NBA MVP and a two-time Finals MVP, con: he’ll be 31 in September and has a lot of rehab ahead), at least some teams are going to do it. And what’s really bizarre is Gottlieb’s claim that the Knicks offering Durant a max deal would somehow be seen as a negative by Durant. What should they do, Doug, insult him by making him a lower offer than what he’ll get from other teams? That’s a real winning way to attract a star to your franchise.

There’s plenty of room for actual discussion in the Durant situation, from if the Knicks will land him to if their degree of focus on trying to land him was smart to perhaps even how wise it is for teams to offer him max deals after this injury. But it seems pretty likely Durant’s going to be offered max deals, and that it’s going to take a max deal (or perhaps an extremely close-to-max deal) to sign him. And claiming that the Knicks offering him a max deal is “desperation” is absurd in its own right, and this gets even more absurd when Gottlieb says “If I’m Kevin Durant, that kind of turns me off.” Absolutely; it’s such a grave insult to be offered the most money you can receive under a collective bargaining agreement. But hey, maybe Fox can apply that in any contract renewal discussions with Gottlieb. “So, you said being offered large sums of money is a turn-off? So you’ll be thrilled with this below-market deal, right?”