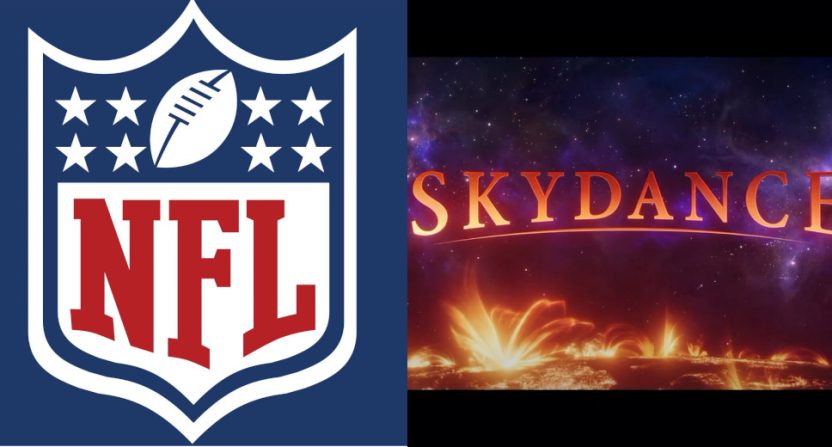 David Ellison’s Skydance Media has had quite a run since its 2010 founding. Some of the notable feature films they’ve been involved with include Star Trek: Beyond, The Old Guard, Without Remorse, Top Gun: Maverick, and this fall’s The Greatest Beer Run Ever. After creating Skydance Sports last October with prominent filmmaker Jon Weinbach as president, they’ve launched several sports projects, including scripted project The Owl with Religion of Sports, U.S./Mexico men’s soccer docuseries Good Neighbors (with Meadowlark Media and Ocellated Media, coming soon to Amazon’s Prime Video), and an upcoming documentary on Diana Taurasi. And now, they’ve teamed with the NFL for a joint venture for scripted and unscripted content that will use a lot of NFL Films’ expertise and resources. That deal was announced Tuesday:

Here’s more on that from a NFL release:

The NFL, NFL Films and Skydance Media today announced a partnership to create the premier global multi-sports production studio in the industry with Skydance Sports. The joint venture brings together one of the most decorated storytellers in sports television production history, and an award-winning media company with a proven track record and expertise in scripted film, TV, and interactive content. Via this exclusive partnership with the NFL, Skydance Sports and NFL Films will now team up to significantly expand multi-platform programming across sports in a broad range of formats for partners, fans, and viewers around the world.

Both the NFL, through its strategic investment arm 32 Equity, and Skydance Media are making substantial investments to launch this joint venture.

“This partnership truly matches two companies who are considered among the best at what they do,” said NFL Chief Media and Business Officer, Brian Rolapp. “Combining the unscripted expertise and storytelling of NFL Films with Skydance’s leadership position in TV, film, animation, and other areas will create the leading sports content studio in the world.”

“We could not be prouder to partner with the NFL to build Skydance Sports into the premiere global sports content studio. Being in business with the most prestigious and far-reaching brands in sport is an honor, and the opportunities for storytelling, consumer resonance and success are endless,” said David Ellison, CEO of Skydance Media. “With the power and expertise of the NFL, NFL Films and Skydance Media, Skydance Sports is poised to deliver some of the most compelling sports content of our generation.”

For quite a while, there’s been talk of the NFL possibly spinning off or selling off NFL Films. In addition to its obvious projects for in-house broadcaster NFL Network, NFL Films has been heavily involved in numerous projects for other services, including 30 for 30 installments, Hard Knocks, All or Nothing, NFL Icons, and more. So there’s value there beyond NFLN content, and that’s led to some of the discussion that NFL Films might be spun off or sold off, either on its own or with other league media assets like NFLN, NFL.com, and/or NFL Sunday Ticket. This joint venture is an interesting way to get around that; it’s not the league selling off NFL Films entirely, but it has them forming a partnership with an outside media company, with both heavily investing in that as per Fischer:

It's a content partnership, but also a true JV– both sides are making cash contributions to supercharge NFL Films capacity.

And Fischer’s piece’s commentary on some of the things planned is notable. This very much is not just a play for those who already consume NFL Films content. It’s an expansion of that brand into many more arenas, both domestic and foreign. And at least some of the target audience there is going to be people who aren’t already consuming what NFL Films puts out.

We’ll see how much demand there is for further “NFL-themed scripted television and movies” (at least one of the latter is already in the works elsewhere!), “game shows, cooking and travel shows, anime and other animation works” (at least one of the last category there exists elsewhere), “and foreign-language productions.” But it’s worth remembering with all this that what may sound silly to established NFL fans may yet find a niche elsewhere, whether domestic or foreign. And it will be interesting to see how this joint venture works out.