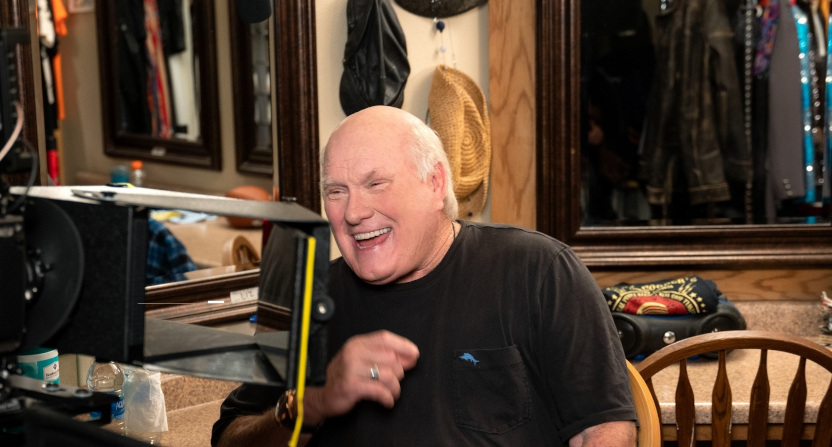 The latest sports project on HBO will look a little different. That’s Terry Bradshaw: Going Deep, which the network announced Tuesday with a Feb. 1 (9:00-10:15 ET/PT) debut. It’s a HBO Sports/NFL Films partnership, following in the tradition of Hard Knocks, and focused on former Pittsburgh Steelers’ star and long-time NFL on Fox personality Terry Bradshaw. However, rather than a standard documentary, this will combine footage from stage shows Bradshaw did this summer in Branson, MO (he’s seen above backstage around one of those shows) with a new interview with him, as well as with archival footage. Here’s more from a release:

The newest installment of the Emmy®-winning programming partnership between HBO Sports and NFL Films takes a unique look at the life of the four-time Super Bowl Champion and Pittsburgh Steelers quarterback in TERRY BRADSHAW: GOING DEEP. Directed by award-winning documentarian Keith Cossrow of NFL Films, the special, which combines Bradshaw’s distinctive stage show with a revealing interview and rare archival footage, debuts TUESDAY, FEBRUARY 1 (9:00-10:15 p.m. ET/PT) on HBO and will be available to stream on HBO Max.

In August of 2021, Bradshaw took the stage at the Clay Cooper Theater in Branson, Missouri for a series of live performances that offered a mix of singing, music, colorful stories, and honest and emotional reflections on his life. Presented in Bradshaw’s own words, TERRY BRADSHAW: GOING DEEP is a first-person account of one of the most popular and versatile sports personalities of modern times.

“There is no one in sports quite like Terry Bradshaw,” said Cossrow. “He’s been in our lives for more than 50 years. We’ve seen him struggle, we’ve seen him on top of the world, he’s made us laugh, and he hasn’t been afraid to cry. And there is no one better to tell his extraordinary story than Terry himself. We are thrilled to have made this special with him.”

Bradshaw has obviously received plenty of profiles before, including a NFL Network “A Football Life” episode in 2019. But this is quite a different spin, with so much of it focused on these stage shows. Here’s more on those shows from a preview piece that was published in The Branson Tri-Lakes News last May:

“Bradshaw will bring his dynamic singing ability, endearing personality and charisma to the Clay Cooper Theatre with a production that chronicles his life’s journey through comedy, music and storytelling,” said a press release from the Clay Cooper Theatre. “The Terry Bradshaw Show will showcase the same straight-shooting, self deprecating humor that has made Bradshaw an all-time favorite as an Emmy Award-winning co-host and analyst on Fox NFL Sunday.”

And while comedy and storytelling are obvious fits for Bradshaw, the music side is a little more unexpected perhaps for those who mostly know him from his Fox NFL Sunday work. But he did record five country/western and gospel music albums between 1976-96, so that’s not new for him either. It will be interesting to see how this all comes together in this special, and how it’s received.