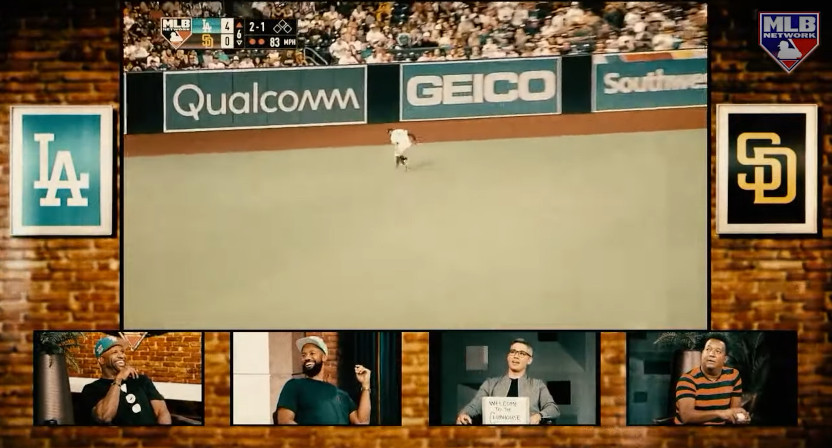 Last year saw MLB Network debut the MLB Network Showcase: Clubhouse Edition “more conversational” approach to game broadcasts, with several former players and a host discussing the game in a studio setting rather than providing traditional play-by-play and color commentary. They did four of those broadcasts last year (the most recent one, Dodgers-Padres last August, is seen at top), with CC Sabathia (who presented the idea to MLBN in the first place) involved each time and Stephen Nelson as the host for three of the four games (Matt Vasgersian handled that role for the other one), and NHL Network also adopted that approach for a game this April.

MLBN has now announced their first Clubhouse Edition broadcast this year, which will be the Mets-Padres game on Monday (starting at 9:30 p.m. Eastern). Sabathia and Nelson will again be involved, with Cliff Floyd and Yonder Alonso joining them this time. Here’s more on that from a release:

“I’m pumped that the Clubhouse games are back on MLB Network,” said Sabathia. “We want the fans to get a little insight on what players are thinking throughout the course of a game. We had fun doing it last year, so I’m looking forward to getting going on Monday with two real good teams playing.”

“This dynamic series was a tremendous success last year,” said Marc Caiafa, MLB Network Senior Vice President of Production. “Collaborating with CC helped us bring a new dimension to the way we broadcast games and throughout baseball. As we look ahead, we’re excited to bring the series back and make it even more enjoyable for baseball fans.”

…“Having a seat in the ‘Clubhouse’ last year was a thrill,” said Nelson. “I love mixing it up with CC and the guys; to be a bridge for fans to experience a game through Major League eyes. It’s so fun to listen to them go back and forth on matchups, strategy, history and storylines just like the rest of us do with our friends. I’m so pumped that the series is back and I can’t wait for Monday.”

Here are some highlights from the 2021 Clubhouse Edition broadcasts:

MLBN’s decision to bring back the Clubhouse Edition format for a second season fits in with the growing numbers of alternate broadcasts focused on conversation we’ve seen in sports lately, including in baseball with ESPN’s KayRod Cast, in women’s basketball with Sue Bird and Diana Taurasi, and in football and golf with the Mannings and Joe Buck respectively hosting. But this particular broadcast is interesting, as it’s the primary feed for the game (for those watching nationally; as with most MLBN games, viewers in these teams’ markets will receive a different game) rather than an alternate feed like those aforementioned broadcasts. The Clubhouse Edition concept clearly worked well enough for MLBN to bring it back for another year; we’ll see how this second season of it goes.